Read Rome 3: The Eagle of the Twelfth Online

Rome 3: The Eagle of the Twelfth 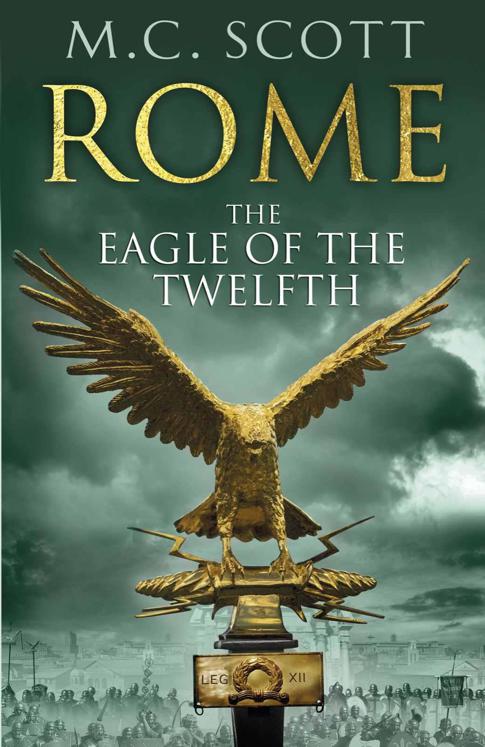 They are known as the Legion of the Damned . . .

Throughout the Roman Army, the XIIth Legion is notorious for its ill fortune. It faces the harshest of postings, the toughest of campaigns, the most vicious of opponents. For one young man, Demalion of Macedon, joining it will be a baptism of fire. And yet, amid the violence and savagery of his life as a legionary, he realizes he has discovered a vocation – as a soldier and a leader of men. He has come to love the XIIth and all the bloody-minded, dark-hearted soldiers he calls his brothers.

But just when he has found a place in the world, all that he cares about is ripped from him. During the brutal Judaean campaign, the Hebrew army inflict a catastrophic defeat upon the legion – not only decimating their ranks, but taking away their soul, the eagle.

There is one final chance to save the legion’s honour – to steal back the eagle. To do that, Demalion and his legionaries must go undercover into Jerusalem, into the very heart of their enemy – where discovery will mean the worst of deaths – if they are to recover their pride.

And that, in itself, is a task worthy only of heroes.

I: Hyrcania, on the Caspian Sea, February,
AD
57: In the Reign of the Emperor Nero

II: Raphana, Syria, Summer,
AD
61: In the Reign of the Emperor Nero

III: Beth Horon, Judaea, November,
AD
66: In the Reign of the Emperor Nero

T
HE
E
AGLE OF THE
T
WELFTH

To the memory of Rosemary Sutcliff,

THERE IS A
generation for whom Rosemary Sutcliff’s seminal novel
The Eagle of the Ninth
is the benchmark by which all other historical writing is judged.

It was our first taste of the ancient world, shaping images that have lasted a lifetime, and for many of us writing today it opened doors we had not known existed and asked questions for which we needed to find answers.

Certainly, I would not be writing the books I now write had I not been so enthralled by Esca and Cub, had I not so badly wanted to know what happened in the warrior tests and who exactly
were
the wild, dancing priests with the new-moon horns on their brows. The
Boudica: Dreaming
series was my answer to this last question and the
Rome
series has brought me to the brink of writing my own ‘Eagle’ narrative.

Sutcliff based her tale around the mythical disappearance of the IXth legion and the then recent find of a wingless legionary Eagle beneath an altar in southern Britain, but the point is that it was truly
mythical
– in reality, the IXth never lost their Eagle.

By contrast, both Josephus and Tacitus provide us with details of a legion that did lose its Eagle without any information on how it was recovered. (We can be fairly certain that it was, for the simple reason that the XIIth was not disbanded and went on to serve under Vespasian and later Titus in the siege of Jerusalem.)

If ever there was a fiction writer’s dream, this is it. But where Sutcliff was able to concentrate solely on the Eagle’s recovery, I wanted us – my readers and myself – to understand what it meant to the men of a legion for the Eagle to be lost. And so this novel, first and foremost, is Demalion’s; his are the eyes, the heart, the mind that guide us through the troubles of the XIIth and we need to see and feel his triumphs before we can understand his loss.

For those of you who have come straight from
Rome: The Coming of the King
, please be patient – you will meet again in these pages the people you know, and find that story’s progression. But in order fully to understand the enormity of what happened to the XIIth legion, we must journey back to a time before Pantera sailed to Britain. Fear not; all threads will weave together in due course.

I could not love thee, Dear, so much,

Lov’d I not honour more.

Richard Lovelace,
To Lucasta, Going to the Wars

Rhandaea, on the northern bank of the Murad Su, in the country of Armenia, October,
AD
62

THE LAST SHREDS
of night held our backs. On either side, unscalable peaks held our flanks. Spread across the wide vale between, we, the XIIth legion, had the advantage of height against our enemy; not a great height, but enough that an olive placed on the stony ground would have rolled under its own weight down the four thousand cubits to the foot of the pass. Enough that when the sun’s first edge cut the horizon and poured light across the tens of thousands of foot and horse who made up the King of Kings’ Parthian army, we found ourselves looking down on to the tops of their helmets and they seemed to ooze towards us, thickly, like so much mercury poured into a dish; a river of shimmering metal, dancing under the sun.

Drums sounded their advance, and their thunder was echoed by the roll of ten thousand hooves. They came faster than I had imagined. Too soon, the faces of our enemies became plain to see and the armoured heads of their horses turned the quicksilver to a darkling ocean with sheen-topped waves.

The gust of wind brought us their stench: a blanket of horse-sweat and man-sweat so thick that we could have cut it with our knives and eaten it to fill the hollowness inside. My own sweat flashed cold across my back, and I reached for comfort to the horn settled at my left shoulder, the brass nestled by my ear, the ready places for my fingers. A spray of notes crowded my mind, ready to loose into the wild air.

The sun edged up until it caught the first heights of our standards. I saw the raised fist of Jupiter reach for the first rays, folding the light into its majesty so that it blazed with a life all its own.

I raised my hand to join it and the cheer that broke along the line was deeper than the enemy drumbeats, lasted longer, grew louder, and harder. It reached the oncoming cavalry and I saw them check in their advance, saw the horses pitch and stumble as they took the first rise of the hill.

In that moment, I believed the gods were with us. From my right side, I heard Syrion suck in a breath and hold it, and let it out in a word:
Arianna
, the name of his woman – one of his several women – spoken as a benediction, in heartfelt gratitude, as by a man who is granted his greatest wish.

Syrion was the standard-bearer for our cohort, and no man deserved the honour more. He wore a muleskin, where others of his kind wore bear or wolf or leopard; for us, the mule spoke to our hearts of the time we had defeated a worthy opponent. He wore it for the first time now, and if it was the last, still, it gave us courage.

On my shield side, my heart side, stood Heraclides, known as Tears, who had been born into wealth on Crete, and had grown expecting to prosper as the owner of a dozen vineyards until both of his parents died, whereupon he had been sent to live with an aunt in Socnopaios, who had given him up as a conscript in payment of tax, in lieu of her eldest son.

Tears had wept for most of the first three months after he joined us, but he was too beautiful to be whipped for it and we had taken care of him and he had grown to be the best swordsman of our unit. He smiled at me now, and it was the smile of the young Apollo, or Zeus in his youth, readying himself for war.

Ranged alongside were the other men of our unit: Rufus, Horgias, Sarapammon and Polydeuces, known as the Rabbit, for the single act of hiding in a hole one winter’s night, when we were camped in the Syrian mountains, with the IVth Scythians as our enemy.

None of us was hiding now. Ablaze at last, as the standard was ablaze, bright in our armour, with our scarlet tunics aglow in the sun, we held a firm line and the need to fight shone from us, I think; our need to prove what we could do.

I looked ahead again. The sun had flooded the pass now. Tribal banners in the coloured silks of the Parthian tribes wove across the oncoming tide in a clash of hues: jade and citrus, scarlet and emerald, cornflower, crimson, gold.

My Sister's a Yo Yo by Gretel Killeen
Yarn by Jon Armstrong
All Inclusive by Judy Astley
The Greek Who Stole Christmas by Anthony Horowitz
The Man Called Brown Condor by Thomas E. Simmons
Vanilla by Scarlet Smith
Zombie Rage (Walking Plague Trilogy #2) by J. R. Rain, Elizabeth Basque
Coming Home by Amy Robyn
Two Days Of A Dream by Kathryn Gimore
The Closing of the Western Mind: The Rise of Faith and the Fall of Reason by Charles Freeman