Silenced: How Apostasy and Blasphemy Codes Are Choking Freedom Worldwide 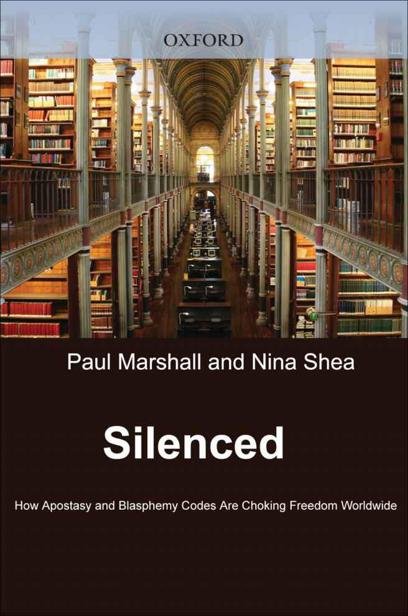 How Apostasy and Blasphemy Codes Are Choking Freedom Worldwide

with a Foreword by
KYAI HAJI ABDURRAHMAN WAHID

To Shahbaz Bhatti, our friend and a lifelong champion of religious freedom, and to Salman Taseer, Governor of Punjab, both murdered in 2011, for opposing Pakistan’s blasphemy laws; and to the late Abdurrahman Wahid and Nasr Hamid Abu-Zayd, who devoted their lives to an Islam of religious freedom
.

PART III THE GLOBALIZATION OF BLASPHEMY

13. Enforcement by Violence and Intimidation

15. Rethinking Classical Muslim Law of Apostasy and the Death Penalty by
Abdullah Saeed

Silenced: How Apostasy and Blasphemy Codes Are Choking Freedom Worldwide
is a project of the Hudson Institute’s Center for Religious Freedom. The Center is deeply grateful for the generosity of the Fieldstead Foundation, the Lynde and Harry Bradley Foundation, and donors who wish to remain anonymous.

We also received valuable assistance from the Abdorrahman Boroumand Foundation, the American Center for Law and Justice, the Becket Fund for Religious Liberty, Compass Direct, the Egyptian Initiative for Personal Rights, the Federalist Society, Forum 18, Human Rights Without Frontiers, Institute for Gulf
Affairs, the Nigerian Civil Liberties Organization, the Pew Forum on Religion and Public Life, and the Sudan Human Rights Organization.

Our special thanks to Abdullah Saeed for kindly agreeing to provide an essay arguing on the basis of Islam that there should not be civil penalties for blasphemy and apostasy. Abdullah Saeed’s essay is adapted from his
Freedom of Religion, Apostasy and Islam
, published by Ashgate Publishing.

We are grateful to Abdurrahman Wahid and Nasr Hamid Abu-Zayd for their contributions—the foreword and “Renewing Qur’anic Studies in the Contemporary World”—that we commissioned; and we are greatly saddened by their deaths during the book’s production. C. Holland Taylor of LibForAll gave valuable advice and assistance and permission to publish these two pieces. Wahid, “Gus Dur,” was cofounder and senior advisor of LibForAll, while Abu-Zayd was the Academic Director of its International Institute of Qur’anic Studies. LibforAll’s Kyai Haji Hodri Ariev also gave editorial advice.

We are especially grateful to Lela Gilbert and Elizabeth Kerley, who provided major assistance in writing, editing, and in all phases of this book. Cameron Wybrow did excellent work on copyediting. Cynthia Read of Oxford University Press was, as always, careful, patient, and encouraging.

We thank Allen Tesler, Chairman of the Board of the Hudson Institute, and the directors, as well as Hudson President Ken Weinstein, and Center Advisory Board
Chairman Chair James R. Woolsey, for their belief in the work of the Center for Religious Freedom.

We would like to thank all the above for their work, assistance, and patience, and we emphasize that the above are not responsible for any errors in the book; nor should it be assumed that they agree with all of its contents.

Paul Marshall is a Senior Fellow at the Hudson Institute’s Center for Religious Freedom and the author and editor of more than twenty books on religion and politics, especially religious freedom, including, more recently
Blind Spot: When Journalists Don’t Get Religion
(2009),
Religious Freedom in the World
(2008),
Radical Islam’s Rules: The Worldwide Spread of Extreme Sharia Law
(2005),
The Rise of Hindu Extremism
(2003),
Islam at the Crossroads
(2002),
God and the Constitution
(2002),
The Talibanization of Nigeria
(2002),
Massacre at the Millennium
(2001),
Religious Freedom in the World
(2000),
Egypt’s Endangered Christians
(1999),
Just Politics
(1998),
Heaven Is Not My Home
(1998),
A Kind of Life Imposed on Man
(1996), and the best-selling, award-winning survey of religious persecution worldwide
Their Blood Cries Out
(1997). He is the author of several hundred articles, and his writings have been translated into Russian, German, French, Dutch, Spanish, Portuguese, Norwegian, Danish, Albanian, Japanese, Malay, Korean, Arabic, Farsi, and Chinese. He is in frequent demand for lectures and media appearances, including interviews on ABC Evening News; CNN; PBS; Fox; the British, Australian, Canadian, South African, and Japanese Broadcasting Corporations; and Al Jazeera. His work has been published in, or is the subject of, articles in the
New York Times, Wall Street Journal, Washington Post, Los Angeles Times, Washington Times, Boston Globe, Dallas Morning News, Christian Science Monitor, First Things, New Republic, Weekly Standard, Reader’s Digest
, and many other newspapers and magazines.

True Love Lost (An FBI Romance Thriller (book 3)) by Kelley, Morgan
The Witch's Stone by Dawn Brown
The Grand Reopening of Dandelion Café by Jenny Oliver
Kade: Armed and Dangerous by Cheyenne McCray
A Treatise on Shelling Beans by Wieslaw Mysliwski
I know you got soul: machines with that certain something by Jeremy Clarkson
The Tender Flame by Anne Saunders
A Dog’s Journey by W. Bruce Cameron
Uncharted Waters by Linda Castillo
True Ghost Stories: Real Accounts of Death and Dying, Grief and Bereavement, Soulmates and Heaven, Near Death Experiences, and Other Paranormal Mysteries (The Supernatural Book Series: Volume 2) by Unknown