Linda Chapman lives in Leicestershire with her family and two Bernese mountain dogs. When she is not writing she spends her time looking after her two young daughters, horse riding and teaching drama.

NOT QUITE A MERMAID series 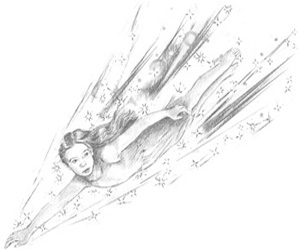 To Jessica Duxbury,
for reminding me vividly of Lucy

âThey are
so
cute!' Lucy declared to her best friend, Allegra, as they flew above the clearing, watching three otter cubs rolling around on the riverbank. The cubs' brown coats were slick with water and their mouths were open as if they were grinning.

âLook, here come the badgers,' Allegra said as a mother badger shambled out of the trees. Two fluffy badger cubs were at her side. In the moonlight the white stripes on their faces shone.

Lucy flew down to land on the short grass.
I love being a stardust spirit
, she thought happily.

Stardust spirits were special people who had more stardust than normal people. At night-time, stardust spirits flew through the sky to gather together and do magic. They met up in woods and on beaches and used their stardust powers to help protect nature, in particular putting right any wrongs done by humans. Lucy would never forget the night that she had found out she was a stardust spirit â it was just over a year ago now.

The mother badger nuzzled Lucy's hand. As she ambled on her way, Lucy heard the sound of voices in the air. Tucking her long brown hair behind her ears, she looked up. Ella and Faye, her and
Allegra's friends, flew into the clearing.

âHi!' Ella called, her dark ponytail bouncing on her shoulders as she landed.

Faye, who was smaller than Ella with short blonde hair and wide blue eyes, swooped down too. âThe river's looking full tonight,' she commented. âI've never seen it so close to flooding.'

âIt must be because of all that rain,' Ella agreed. âDid you two see it earlier this evening? It was like someone was just tipping water out of the sky.'

Allegra nodded. âIt really chucked it down, didn't it?'

âThere's been lots of weird weather stuff happening,' Lucy commented. âThere was that tornado a month ago and then the mini hurricane and now all this rain.' She gave Allegra a concerned look.

âYour mum thinks dark spirits might have been interfering with the stardust in the sky, doesn't she?'

Allegra nodded. The others shivered. Dark spirits were stardust spirits who had turned bad. They loved power and were always trying to get more, either by taking the stardust from normal stardust spirits or by drawing it down directly from the stars in the sky. âI hope there aren't any dark spirits near here,' Faye said anxiously.

The night suddenly seemed to grow darker. Clouds scudded across the moon.

âIt looks like it's going to rain even more!' Ella exclaimed.

There was a long low rumbling in the distance. The badgers hastily turned and began to head back towards their sett in the trees. The otters scrambled out of the river. Big fat raindrops began to fall. They splashed on to the girls' bare arms. 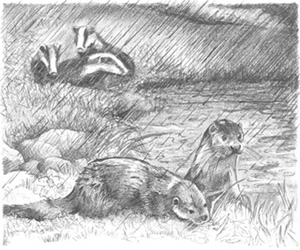 âIf there's lots of rain the river might overflow its banks!' Faye said in alarm. âWhat about the badgers? Their sett will be flooded.'

Lucy looked round. It wasn't just the badgers who were in danger. The nearby bushes had birds' nests in them and there were many mice, voles and shrews and other small creatures living in the undergrowth. Their homes would be destroyed too if the river flooded. âWe have to stop it!'

An idea burst into Lucy's brain. âWe might not be able to stop a storm!' she shouted over a crash of thunder. âBut we can stop rain from falling into this part of the river at least!'

She took a deep breath and shut her eyes. Lucy was a summer spirit, which meant that she could start fires and protect things by placing magic barriers around them or over them. There were four types of stardust spirit â summer, autumn, winter and spring. Each type could do different magic.

Lucy's skin began to tingle. The magic inside her surged upwards.

âWhat are you going to do?' Allegra asked.

In reply, Lucy opened her eyes and pointed her hand at the river. âShield be with me!'

The air above the river seemed to shimmer silver for a moment and then suddenly the rain started bouncing away
before it hit the surface, as if there was an invisible barrier over the river.

âYou've put a shield over the river!' Faye exclaimed.

There was a flash of lightning. As the bright light lit up the sky, a group of adult stardust spirits came swooping into the clearing. Leading them was Allegra's mum, Xanthe.

In one glance, Xanthe saw what Lucy was doing. âWell done, Lucy!' she cried above the noise of the rain. âWe've got to stop the river flooding. We're going to try and work together to divert the rain. Get back, girls!'

Three of the adult spirits â Tom, Padma and Emma â formed a circle with Xanthe. They were all autumn spirits, which meant they could use their magic to conjure
winds. Through the rain, Lucy saw them clasp hands and shut their eyes. She could tell they were using their strength to draw down magic from the skies. âWind be with me!' they all shouted, pointing their hands up high at the same moment.

A gale ripped through the clearing. The trees creaked and bent; the grass flattened against the ground. Lucy's long wet hair whipped around her face. But the magic was working. The wind hit the rain clouds and they began to move very slowly across the sky taking the rain with them.

âMore power!' Xanthe cried as several branches broke off the trees and crashed to the ground.

âWe haven't got any more!' Tom shouted as the rain clouds seemed to battle back against the wind.

Lucy had an idea. As well as having huge amounts of power inside her, she also had an unusual ability to attract magic. She knew she could draw down power from the skies and let it flow into other people because she'd done it before. Maybe she could do it again now?

Fighting against the wind, she ran over. Xanthe seemed to realize what was in her mind. âHelp us, Lucy!' she urged.

Lucy grabbed her hand. Letting the noise of the storm slip away, she let a lion form in her mind â a lion made out of stars. It was the constellation of Leo, the constellation that gave all summer spirits their powers.

Come to me
, she thought to the magic crackling in the skies above.

Power surged into her. For a moment,
she felt a fierce longing to hold on to it, to keep it, to use it herself. But she made herself ignore those feelings and keep her mind open. She willed the power to flow through her and out into Xanthe via their clasped hands. Xanthe gasped as the magic surged from the skies into Lucy and then into her. Around them more branches broke off trees and crashed to the ground.

Lucy noticed Faye, Ella and Allegra run to the badgers' sett, their hair flattened to their faces with the rain, the wind whipping their dresses around their legs. As she wondered what they were doing, she felt her magic lessen. She immediately focused on what she was doing. She could find out what her friends were up to later.

Power, more power
, she thought. The wind blew even harder. The rain clouds began to move away across the sky.

The dark clouds rolled apart. They got smaller and smaller. The rain began to lessen. There was a final distant clap of fading thunder as the raindrops stopped falling.

Lucy let the picture of the lion slip from her mind and the power stopped flowing. She took a deep trembling breath.

She felt Xanthe's hand on her shoulder. âThank you,' Xanthe said softly to her.

âThat's OK.' Lucy could hardly get the words out. Her skin was tingling with the remains of the magic.

âMaybe you should sit down for a moment,' Xanthe said.

But Lucy shook her head. She wanted to find out what Allegra and the others were doing. She hurried over to where her friends were crouching around something on the ground. Shock jolted through her. The mother badger had been hit by a branch and was lying on her side, not moving. Lucy's friends' faces were serious. Faye had her hand on the badger's head.

Allegra shook her head and put her finger to her lips. Lucy saw that Faye's eyes were closed and there was a look of intense concentration on her face.

Healing magic
, Lucy realized. Winter
spirits like Faye could heal things as well as being able to make it rain.

The badger heaved itself to its feet and looked round anxiously. The two black and white cubs were peeping out of the sett entrance. They squeaked with delight when they saw their mother coming towards them.