Lucy stared. More rain! She caught her breath and with a bump, as if she was in an airplane as it landed, she found herself back in her own body.

Joanna scanned her face. âHow was it?'

âRain clouds!' Lucy gasped. She saw the confusion crossing Joanna's face and jumped to her feet. âThere's another storm coming and more rain! The river will flood! We've got to tell the others!'

To Lucy's relief, Joanna didn't waste time asking any questions. âCome on!' she exclaimed. They flew back to the main clearing.

âThere are storm clouds in the sky!' Lucy shouted as she swooped down towards Xanthe who was talking to Tom and Padma.

âThe river through the woods will
flood if there's more rain,' Padma said in concern.

âRobyn will be able to help too,' Joanna put in.

âIt's Lucy's power we need,' Xanthe said. Lucy saw Joanna frown, but Xanthe was already flying up into the air. âCome on, Lucy!'

Lucy shot a look over to where Allegra was standing with Faye and Ella. She was longing to fly over and speak to them, but there wasn't time. She raced after Xanthe to the riverbank. There was a crash of thunder as the first drops of rain began to fall.

âQuick!' Tom shouted as they reached the clearing.

Xanthe hurried to join the other adult autumn spirits who were calling up a wind while Joanna and Robyn ran over to where the other summer spirits were conjuring a shield over the fast-flowing river. The wind whipped through the clearing.

Lucy's skin suddenly prickled as if she was being watched. She swung round. Robyn looked too and Lucy wondered if she'd had the same strange feeling. The bushes to one side moved slightly. Lucy caught her breath, but then she glimpsed a flash of red fur in the shadows. It was just a fox slipping through the trees.

âLucy!' Xanthe yelled over the buffeting of the gale. âWe need your power!' Lucy fought against the wind to get closer to Xanthe. Xanthe reached out
and Lucy grabbed her hand.

âPower!' she breathed. She could feel magic crackling around her.
Come to me.

Lucy waited for power to surge into her, but nothing happened.

Come to me
, she thought more insistently. But it was as if there was a barricade up in her mind. Something seemed to be stopping the power flowing into her. 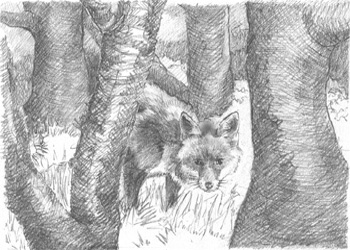 panic. She tried again. But although she could feel the magic in the air all around her, it felt like there was a wall between it and her.

Lucy swung round. The other summer spirits were holding the magic shield in place over the water. Everyone else's magic seemed to be working. It was just hers! As she watched, she suddenly saw one of the riverbanks begin to move and slide. No one else had noticed it! âWatch out!' she shouted. âThe bank's giving way!'

Robyn was the nearest to Lucy and heard her shout. She flung out her arm towards the disintegrating bank. âShield be with me!' A shield formed, filling the gap where the bank had been, stopping the water from flowing.

âThe clouds are moving!' Emma shouted suddenly from the line of autumn spirits.

Little by little, even without Lucy's help, the autumn spirits managed to increase the wind until the clouds had blown apart.

The thunder faded. The rain stopped. The stardust spirits lowered their arms. They were soaked through and their faces were pale and exhausted. It was clear the magic had taken a huge amount of effort. They sat down, drawing in deep breaths.

âI don't know,' Lucy stammered. âI tried to call down power, but it was like there was something blocking it.'

Xanthe looked round at the summer spirits. âDid any of you notice the same effect? Maybe it was something to do with summer magic.'

The other summer spirits shook their heads. âWe were fine,' a spirit called Rebecca said. âAnd Robyn did a fantastic job. She stopped the river from breaching its banks.' 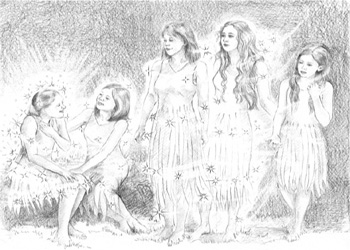 Lucy looked round to where Robyn had been keeping the protective shield blocking the river. Two spring spirits, Laura and Sasha, were growing bushes and thick plants to hold the mud together and strengthen the bank.

âRobyn's very powerful for her age,' Joanna said proudly. âAnd she's always practising so she has great control of her magic.'

âWell done!' Tom said to Robyn. Several of the other adults called out similar words of praise. Robyn blushed but looked very pleased.

Lucy's head felt as if it was in a whirl. She still couldn't get over the fact that her magic hadn't worked. Why?

As the other stardust spirits began to inspect the damage, Xanthe came over to
Lucy and put an arm around her. âTell me exactly what happened,' she said in a low voice.

âIt was like there was something blocking the power so it couldn't get into me,' Lucy told her anxiously. âWhat could it have been, Xanthe?'

Xanthe looked worried. âPowerful spirits can block the magic of other spirits, but only dark spirits would usually try it.'

Lucy remembered the feeling of being watched. âCould there have been a dark spirit in the trees?'

âMaybe.' Xanthe glanced across the clearing. âBut it doesn't really make sense. Why would they want to block your magic like that? It wasn't as if you were fighting them. What would be the point
of them coming here to block your magic and make themselves known to us?'

âI'd better warn the others anyway.' Xanthe squeezed Lucy's hand. âTry not to worry too much, but be very careful for the rest of the night.'

Nothing else odd happened for the rest of the night, but Lucy couldn't stop thinking about what had happened by the riverbank. Why had her magic stopped working like that?

She didn't sleep very well that night. Her dreams were full of dark figures. Their faces were pursuing her through the trees, closing in on all sides. She stumbled and they surrounded her, raising their hands to do magic.

She woke with a start. The sun was streaming in through her open curtains. Pushing the covers back, Lucy got up. She could still feel the dream pulling at the edges of her mind. Feeling slightly shaky, she went downstairs.

Her mum and dad were in the kitchen. Everything looked reassuringly familiar. The kettle was boiling, the radio was on, the table was set out with cereal boxes, bowls and plates.

Her dad frowned as she appeared in the doorway. âAre you OK, sweetheart? You look very pale.'

âI had a nightmare,' Lucy said, going over to him.

Her dad hugged her. âA bad one?' Lucy nodded.

âWhat was it about?' her mum asked. 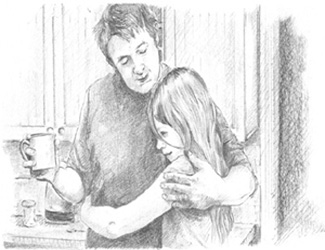 âIt was about being chased and things,' Lucy said vaguely.

âDon't worry about it,' her dad said. âIt was just a dream.' He pulled her close.

Lucy leaned her head against her dad's shoulder. He felt warm and strong. She wished she could tell him about the dark spirits â about how scared she was, and how worried. She shut her eyes, but the strange figures still lurked in the back of her mind.

It was half term that week so although it was a Sunday night, Lucy was allowed to stay at Allegra's again. As they ate supper â French bread with cheese and salad â Xanthe told them her news. âI was speaking to some of the other adults today and we've decided that with all these storms and strange stuff going on, we could do with having some fun so we're going to celebrate the rising of Leo in the skies,' she explained to Lucy.

âWe will have a feast in six days' time.'

âHow does that sound?' Xanthe said.

âCan we tell the others?' Allegra asked.

When they got to the clearing that night, Emma asked Lucy and Allegra if they would go and check on a pair of kingfishers who were nesting in the riverbank downstream from the otters. They headed off together.

The kingfishers were nesting in a sandy burrow in the riverbank. They both seemed healthy and the rain had not damaged their burrow. On the way back to the main clearing, Lucy and Allegra stopped to check on the otters
and the badgers too. The badger cubs were gambolling in the moonlight and the mother badger was watching them. The otters were diving in and out of the river.

âEverything looks just fine,' Allegra said happily. âAnd there's no clouds around so hopefully it's not going to rain any more.'

They flew back. When they reached the clearing, they saw Robyn had arrived. She was laughing with Martha and Katie, two teenage stardust spirits.

âWhere have you been?' Robyn called.

âI love kingfishers. I wish I could've come, but Mum wanted me to have a lesson so we were a bit late,' Robyn said.

âYour magic's amazing, Robyn,' Martha
said. She glanced at Allegra and Lucy. âRobyn made a fire in the shape of a ball just now.' 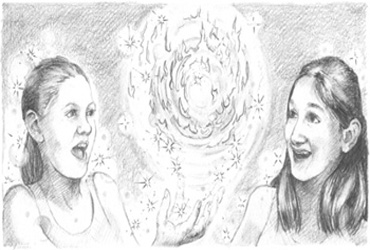 Just then some of Martha and Katie's friends arrived in the clearing. âSee you later, Robyn,' Martha said.

As the older girls flew off, Ella chased Faye into the clearing. âTick!' she gasped as she ticked Faye's leg.

âLet's play magic tick,' Lucy suggested. She turned to Robyn. âMagic tick is where you can use your magic to get away from the people who are it. When you get caught, you have to help the person who's it until everyone's been caught.'

Joanna came flying over and caught the last of Lucy's words. âSounds like a fun game.'

âIt is,' Lucy told her. âYou can play too if you want, Joanna.'