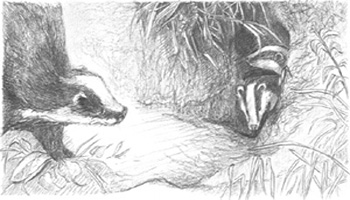 âYou got rid of the rain, Xanthe,' Allegra said. She always called her mum by her first name, not âmum'. At first Lucy had found it odd, but now she was used to it.

âBut a lot of damage has been done,' said Tom, coming over with Emma and Padma.

Lucy looked around. The clearing was strewn with broken branches and many of the plants and bushes had been flattened.

The girls began to pick up branches and move them to the side of the clearing.

Ella, who was a spring spirit and could make things grow, used her magic to regrow some of the damaged plants and trees while the adult autumn spirits dried the ground out with gentle breezes.

Xanthe beckoned to Lucy. âCan I speak to you for a moment, Lucy?'

Curious as to what Xanthe wanted, Lucy joined her. Xanthe's eyes were serious. âYou used your powers really well,' she said, taking Lucy's hand. âWe wouldn't have been able to stop the rain without you. Your magic is getting stronger all the time.'

Lucy hadn't really thought about it, but now she realized Xanthe was right. A year ago she had always had to concentrate hard to do magic, but now, when she was a stardust spirit, she could
do magic almost without thinking. âI suppose it is,' she said.

âDo you remember you once asked me what Dan meant when he called you the Last of the Summer Spirits?' Xanthe said.

Lucy nodded. Dan was a dark spirit she had met at Easter time. He had tried to use her to draw down stardust from the skies. Lucy had managed to fight him off and the battle between them had left him severely weakened. But as he had flown away he had vowed he would see her again and had called her the Last of the Summer Spirits. âI asked you what he meant, but you wouldn't tell me,' she said to Xanthe.

âNo,' Xanthe said. âI thought you'd had enough to deal with that night. But nowâ¦' She squeezed Lucy's hand. âI think it's time that you learned the truth.'

Xanthe's eyes were grave. âThere have been no new summer spirits since you became one last year, Lucy,' she said.

Xanthe shook her head. âNo. You are the last summer spirit. I believe it is why
you attract magic so easily and why you are getting stronger all the time. As you know, when a person first turns into a stardust spirit, stardust from one of the four Royal Stars flows into them. Spirits like you who get stardust from the Royal Star, Regulus, become summer spirits; spring spirits get their stardust from Aldebaran, autumn spirits from Antares and winter spirits from Fomalhaut. The youngest spirit in the world acts like a magnet, attracting stardust from their Royal Star, and when the next new spirit comes along, that spirit becomes the magnet instead and so on. Because there have been no summer spirits since you, the stardust from Regulus has been flowing into you â and just you â for over a year now. I think that is why you
are so incredibly powerful for your age.'

âI don't know for sure,' Xanthe replied. âBut I believe it has something to do with dark spirits. It seems likely that a group of them have been working together to draw down power from the skies, disrupting the balance of nature, for over a year now.'

âFor as long as I've been a stardust spirit,' said Lucy slowly.

Xanthe nodded. âIt also explains why there have been such a spate of strange weather conditions.'

âWill there ever be any other summer spirits?' Lucy asked.

Xanthe hesitated. âI hope so. Without new spirits of each type we won't be
able to keep the balance of stardust in the skies and care for nature in the way we need to.' She ran a hand through her long blonde hair. âBut there's more that I need to tell you, Lucy. The stars suggest that when the Last of the Summer Spirits arrives, there will be a great battle for power in the stardust world. It is written in the skies that the Last of the Summer Spirits will have an important role to play in that battle.' 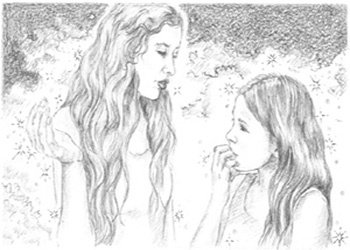 Xanthe nodded. âIt is hard to read the stars, Lucy, but you must be careful. We do not know where this group of dark spirits are, but if Dan is one of this group, or if they find out from him that you are the Last of the Summer Spirits, you are likely to be in great danger. I don't want you going off on your own at the moment â in fact, I don't want any of you younger spirits flying around alone.' Xanthe glanced at the other girls who were on the far side of the clearing. âYou must keep practising your magic to make yourself as strong as possible. Promise me that.'

A worried smile flickered across
Xanthe's lips. âGood girl. A friend of mine, Joanna, will be coming to join our stardust group. She has a daughter called Robyn, who is a few months older than you. Joanna is exceptionally good at travelling in the minds of animals and birds. It is a magic that not many spirits can do, but it allows you to travel with an animal and use its eyes and ears to see and hear. I think it would be good for you to try and learn this magic. It will help you if you ever need to spy out the land for danger. Would you like Joanna to teach you how to do it?' Lucy nodded eagerly.

âGood,' Xanthe said. âI will speak to Joanna when she arrives tomorrow. It will be good to see her again. We were best friends when we were younger, just
like you and Allegra, but Joanna's work takes her all over the country and it is several years since we have seen each other. Now, go on back to the others.'

âCan I tell them about all this?' Lucy asked, seeing her friends watching her curiously from across the clearing.

Xanthe nodded. âYes.' Lucy quickly flew over to the others.

âWhat was that about?' Allegra demanded.

Lucy swallowed. âOh, yes. It's bad.' As the adults left the clearing, she told the others what Xanthe had said. They were shocked.

âSo that's what Dan meant when he
said you were the Last of the Summer Spirits!' Ella exclaimed.

âAnd there've been no other summer spirits since you.' Allegra's usually mischievous eyes were very serious for once. âThat's why you're so powerful?' Lucy nodded.

Faye looked scared. âSo there are dark spirits trying to catch you?'

âThere might be,' Lucy replied. âXanthe said that no one knows where they are, but that none of us should go flying on our own.'

They all glanced round uneasily at the dark trees.

Lucy really wished she could believe her.

Lucy started. She had been staring at a box of cornflakes, lost in thoughts about the night before.

âLucy?' her mum said, holding out a piece of toast.

âThanks,' Lucy said. She took it and absent-mindedly started to put chocolate spread on it.
The Last of the Summer Spiritsâ¦A great battle for powerâ¦An important
role to playâ¦
Xanthe's words echoed round in her head.

âAre you OK, Lucy?' her mum asked her. âYou've hardly said a word since you got up.'

âDon't strain your brain,' teased Rachel, her thirteen-year-old sister who was sitting opposite. âSo what big important things have you been thinking about? Whether to clean Thumper's cage out this morning or this afternoon? Or whether to have Coco Pops or Weetabix for your breakfast?'

Lucy sent her a withering look. If only her sister knew!

âOh, stop teasing, Rachel,' said Hope, who was a year older than Rachel and much easier-going. She started to help
Mrs Evans clear away. âI hope it doesn't rain any more today, Mum,' she said, changing the subject as Lucy and Rachel glared at each other across the table.

Mrs Evans nodded. âThe river in the village is really high. If it rains much more it is going to be in danger of flooding. The last time it flooded it was awful. There was lots of damage done. The water got into the ground-floor rooms of everyone's houses. Cars were flooded. I really hope the rain holds off and the river has a chance to go down.'

Lucy thought about the river in the woods that had almost flooded the night before. âI hope so too,' she said worriedly.

Her mum smiled at her. âOh, poppet, there's no need for you to worry about it.' She ruffled Lucy's hair. âThe weather
forecast said that the next few days should be dry.'

But what if the forecast is wrong?
Lucy thought, the image of a group of dark spirits drawing down power from the skies filling her mind.

Allegra came round after breakfast. She and Lucy went outside to see Thumper, Lucy's rabbit. âIt's weird to think that you're the Last of the Summer Spirits,' Allegra whispered as she sat on the grass and cuddled the small brown rabbit. âI couldn't sleep last night. I just kept thinking about it.'

âMe too,' Lucy admitted, unclipping the water battle to refill it. âYour mum even said I might be involved in a battle.'

Allegra stroked Thumper, looking worried. âThere might not be. The stars
only tell of things that might happen. Nothing's definite.'

âBut what if it does?' Lucy said.

Mrs Evans came out to take in some washing that was drying on the line. âYou two look very serious,' she smiled. âWhat are you talking about?' 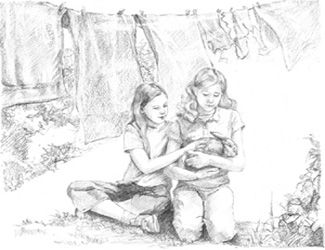 Mrs Evans raised her eyebrows. âNothing you're going to tell
me
anyway.' She shook her head. âDon't worry. I remember what it's like to be ten.' She took the washing down and went back inside.

Lucy sighed and rubbed her hands over her face. âWhat would she say if she knew?'

Allegra looked at her sympathetically. âIt must be hard not being able to talk about it with anyone here.'

Lucy nodded. When she had first become a stardust spirit she had really liked having something that was all hers and that her family knew nothing about, but now she couldn't help wishing she could tell them about it. It was all so scary.

âShould we go to my house?' Allegra
said. âMum said Joanna and Robyn might call in this morning.'

Lucy remembered Xanthe mentioning her friend, Joanna and her daughter, Robyn. âOK,' she said. âSo what's Robyn like?' she asked as they covered up Thumper's run and went next door.

Queen’s Knight (Invitation to Eden) by Sara Fawkes
Given World by Palaia, Marian
Adventure According to Humphrey by Betty G. Birney
Sophie and the Locust Curse by Davies, Stephen
Sixes Wild: Manifest Destiny by Tempe O'Kun
Cinderfella by Linda Winstead Jones
The Silver Anniversary Murder by Lee Harris
Agent with a History by Guy Stanton III
Kellion by Marian Tee
A Morning for Flamingos by James Lee Burke