Xanthe hugged her. âOh, Lucy. Try not to worry. We'll sort this out. I promise.' She kissed her forehead. âYou should go to bed. We can talk more in the morning.'

âBye,' Allegra said, shooting a worried look at her.

âBye.' Lucy left. As she walked slowly back to her house she thought about what Xanthe had said. She had seemed so sure that Joanna wasn't a dark spirit. But what if Xanthe was wrong?

Feeling utterly torn and confused,
Lucy opened the back door of her house and caught her breath.

Her dad was standing at the sink getting a glass of water. He stared at her as if he couldn't believe his eyes. âLucy! Where have you been?'

âIâ¦Iâ¦' Lucy wished desperately she'd turned into a stardust spirit and flown next door. What should she say? âI went to see Allegra.'

âAt five o'clock in the morning!' her dad exclaimed.

âI had something I needed to tell her,' Lucy replied, but even as she said it she was aware of how dumb it sounded. She felt sick as she stared at her dad's shocked face.

âLucy!' her dad said. âAre you seriously telling me you went round to Allegra's house at five o'clock in the morning just to tell her something?'

âI had to,' Lucy said in a small voice.

âNo, Lucy,' her dad said angrily. âYou did not
have
to! Whatever it was it could have waited until the morning.'

âNo excuses, Lucy.' Her dad looked very cross. âI am
very
disappointed in you. How could you possibly have thought it was acceptable for you to go next door in the middle of the night?'

âWe'll talk about this in the morning,' her dad said. âGo to your room â now!'

When Lucy woke up, she thought for a moment that she had imagined the night before, but gradually she realized it had really happened. It wasn't just a horrible dream. Her dad really
had
caught her coming back from Allegra's at five o'clock in the morning. She groaned and buried her face in the pillow.

Half an hour later her mum knocked on the door and came into the room. She looked serious. âDad told me about what
happened last night,' she said. âWhatever possessed you to go round to Allegra's in the middle of the night, Lucy?'

Lucy shrugged. She knew there was nothing she could say to make her mum understand.

Mrs Evans sat down on the bed. âLucy, you mustn't ever go out of the house at night without telling us. Is that clear?' Lucy nodded.

âWell, Dad and I have talked about it,' her mum said. âWe can't let you get away with something like this without punishing you and so we both think you shouldn't see Allegra for three days. I'll ring Xanthe and explain.' Mrs Evans stood up. âCome downstairs for breakfast when you're ready.'

Lucy waited until the door had closed
behind her mum and then buried her face in the pillow again. Now she wasn't allowed to see Allegra in the day and she really wanted to talk to her about Joanna.
And it's half term
, she thought despairingly.

She thumped the pillow. It just wasn't fair!

After Lucy got up, her mum made her go to the supermarket with her and then to visit a friend she worked with. Lucy kept thinking about Allegra. They'd planned to make an exercise track for Thumper. What was Allegra doing instead?

Lucy jerked out of her thoughts. âYes. Why?'

âYou've been very quiet today. I know
you're upset about not being able to see Allegra, but you do understand that Dad and I had to punish you, don't you?'

âYes,' Lucy sighed. âIt's justâ¦' She broke off. After all, what was the point?

Her mum gave her a concerned look. âYou still haven't told me why you went round to Allegra's in the middle of the night.'

âBut it must have been,' her mum argued. âYou wouldn't have gone there at that time otherwise.' She looked at Lucy. âYou know you can always talk to me if there's something bothering you.' Lucy nodded.

âThere's nothing wrong at school, is there?' her mum persisted. 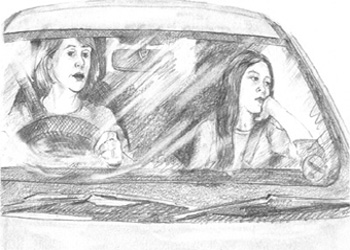 âNo,' Lucy replied. She looked out of the car window. She could tell her mum was watching her, but to her relief she didn't say anything more.

âI can't believe you're not supposed to see me for three days!' Allegra exclaimed as they swooped over the fields that night.

âI know,' Lucy said. âI wish my mum and dad were stardust spirits so that they understood.'

âBut what about the things I heard her saying,' Lucy said. âIt sounded like she's been trying to do stuff to me and she's been there every time my magic hasn't worked.'

âBut we never feel odd around her,' Allegra said. Usually, when normal stardust spirits were close to dark spirits, they felt faint and sick.

Lucy had been thinking about that. âBut we didn't around Dan either. Remember he said he and some other spirits had worked out a way of using power so that normal stardust spirits didn't sense he was a dark spirit. Maybe Joanna can do the same sort of thing?'

âMaybe,' said Allegra doubtfully. âSo what are you going to do?'

âWe'd better watch her carefully,' Allegra said. âThen if she tries to do anything we can tell Xanthe.'

Lucy nodded. âGood plan.' She flew faster. âCome on! Faye and Ella will be wondering where we are!'

When they reached the clearing, Ella and Faye flew over. âXanthe wants us to go and check the river,' Ella said. âA tree has fallen in and the water is building up. Some of the other adults are getting rid of the tree, but we need to check that the river isn't overflowing.'

As they flew out of the clearing they
saw Robyn in a nearby tree. âWhere are you off to?' she called.

âGreat. Can I come too?' Robyn asked.

Lucy didn't really want Robyn with them because she'd been hoping to tell Ella and Faye about Joanna, but she couldn't exactly say no. âOK,' she said.

âOh, no! Look!' Faye exclaimed when they reached the river. Water was streaming down the banks, flooding the ground.

âIf there's a tree in the river further downstream it will be acting like a dam,' Allegra said. âThat means the water here will get higher and higher until the tree's moved.'

âLook, it's flooding the otter holt,' Lucy
exclaimed, seeing the water streaming into the pile of wood.

âThe otters will be fine, but what if it reaches the badgers!' Allegra said.

Lucy took charge. âElla, can you grow some more plants to keep the water in? And Robyn, why don't you and I put shields round the badger sett until help arrives.'

While Ella got on with growing plants along the top of the bank to stem the flow of water, Lucy pointed at the badger sett. âShield be with me!'

âShield be with me!' repeated Lucy.

She tried to pull power up from inside herself, but it just wouldn't seem to come. She looked round. Robyn was staring at her uneasily. âWhat's the matter?'

Robyn pointed at the sett. âShield be with me!'

A perfect shield formed round the badgers' sett. The water reached it, but couldn't get through.

Lucy's thoughts raced. Joanna wasn't there! So who was affecting her magic?

Suddenly she sensed that she was being watched. She swung round, feeling as if icy fingers were running down her spine. A rabbit hopped away into the bushes and then Joanna stepped into the clearing.
âHello, girls. I just thought I'd come and see how you were getting on.'

Lucy stared. How long had she been there? Before she could say anything, Allegra and Faye came swooping back to the clearing with four of the adults.

Allegra suddenly seemed to see the shock and confusion on Lucy's face. âAre you OK?' she asked in concern.

Lucy was desperate to talk, but not with everyone there. She looked round and saw Joanna watching her with an inscrutable expression on her face. As soon as she caught Lucy's gaze Joanna's face relaxed into a warm smile. Lucy waved and walked over to Robyn.

She glanced over and caught Robyn saying something in an urgent whisper to her mum. Joanna carried on smiling, but gave a quick shake of her head and then went to help the other adults. Lucy stared at Robyn. Robyn caught her gaze, flushed and looked away. Lucy felt fear and anger swirl inside her. Joanna was doing something to her and Robyn knew about it. She was sure!

At last the riverbank was shored up enough and the water was dried up by heat and wind. When Lucy tried to help the other summer spirits with the heating up, she was relieved to find that her magic was working again. But all
the time she was doing magic, she kept thinking about what had happened. Her magic hadn't worked. Joanna had been there. She remembered the look on Robyn's face when she had caught her gaze after Joanna had been talking to her. What did Robyn know?
I'm going to find out
, Lucy thought determinedly.

When everything had been cleared up, the adults left to go and see how the others were getting on moving the fallen tree. âSee you later,' Joanna called.

As soon as the adults had gone, Allegra flew over to Lucy. âSo what happened?' she demanded.

Lucy ignored her and marched over to Robyn.
Be careful
, a voice said in her head,
her mum might be a dark spirit
. But she ignored it. âWhat's going on?' she said hotly.

For a second, Robyn looked taken aback and then she smoothed her hair. âWhat do you mean?'

Lucy glared at her. âYour mum's doing something to me!'

âDon't be stupid,' Robyn protested, but Lucy was sure she saw a look of guilt flicker across the other girl's eyes.

Anger rose inside her. âShe's stopping my magic from working,' Lucy said, aware that Ella, Faye and Allegra had gathered round and were listening.

âMy mum? No, she isn't!' Robyn said, but her voice was high and Lucy was sure she was lying.

âDon't act as if you don't know!' Lucy
replied. âShe's doing something to my magic! She's doing things to me because I'm the Last of the Summer Spirits! She'sâ¦'

âMy mum's
not
a dark spirit!' Robyn interrupted furiously. âHow dare you say such a thing!'

Anger beat through Lucy. âShe
is
a dark spirit! Why else would she be doing things to my magic?' 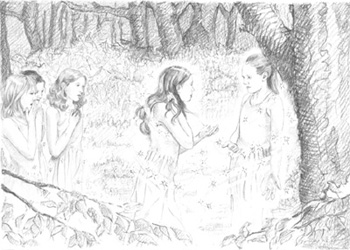 âBecauseâ¦' Robyn cried. She broke off and shook her head. âLucy, you don't know anything! My mum's not a dark spirit!' she said, tears filling her eyes. âShe's not!' And with that she took off into the air and flew away.

âWait! Don't go on your own,' Ella protested, going after her. She swung round to the others. âWe can't let her fly off on her own!'

âWell, she's not likely to get into trouble, is she? Her mum's a dark spirit!' Lucy exclaimed.

âYou don't know that for sure,' Ella said. âI'll go after her.'

Hettie of Hope Street by Groves, Annie
The Family Trap by Joanne Phillips
For Sale —American Paradise by Willie Drye
Hens and Chickens by Jennifer Wixson
Reincarnation by Suzanne Weyn
Mandarin Gate by Eliot Pattison
No Book but the World: A Novel by Cohen, Leah Hager
Rock and A Hard Place (Cascade Brides Series) by Blythe, Bonnie
Aftermath by Joanne Clancy
Princess in Pink by Meg Cabot