âBut, Ella, if her mum
is
a dark spirit, you shouldn't be on your own with her!' Faye said. âWait! I'll come too!' And they flew after Robyn as fast as they could.

Silence fell. Lucy felt her heart gradually stop pounding and her anger fade. She looked at Allegra. For a moment neither of them spoke.

âJoanna
is
a dark spirit,' Lucy said, but suddenly she wasn't quite so certain. Remembering the shocked and hurt look in Robyn's eyes, she began to feel bad.

Allegra chewed her lip. âWell, we
think
she is.'

Lucy sighed. âShe
has
to be! She's doing something to my magic. I know she is! And actually,' she thought back over what Robyn had just said, âRobyn sort of agreed with me. Just before she flew off.'

âI know. I noticed that, but then she did seem really shocked when you said Joanna was a dark spirit,' Allegra pointed out.

Lucy nodded. Now her anger had gone she felt awful. It must have been horrible for Robyn to hear her mum being accused of being a dark spirit. âMaybe I shouldn't have said anything.'

âDo you want to go back to the clearing?' Allegra asked her.

Lucy shook her head. She didn't feel like being around other stardust spirits. âI think I might go home.'

When Lucy got into bed, she lay awake thinking about Joanna. Was she a dark spirit? What did she want? She tossed and turned. When she finally fell asleep, her dreams were full of dark spirits and strange, creepy eyes watching her from the shadows of the trees. She woke up in the morning still feeling tired.

Her mum was making a cup of coffee. Rachel and Hope were getting ready to go to the stables. Mrs Evans frowned when she saw Lucy's pale face. âAre you all right, Lucy?'

âBeen going round to Allegra's in the middle of the night again?' Rachel
grinned. âWhat was it you wanted to discuss this time? How long you should play with Thumper today?'

Lucy ignored her and sat down at the table, rubbing her eyes.

Rachel looked rather surprised at Lucy's lack of response. âOoh, in a mood, are you?'

âNo,' said Lucy wearily. She couldn't even work up the energy to be annoyed by Rachel that morning. What did her sister's teasing matter when she had a dark spirit after her? She saw her mum look at her in concern.

Lucy shook her head. âNot really. I had bad dreams.'

âAgain!' her mum said. âWhat about?' Lucy looked at the table and shrugged.

Her mum sat down next to her. âLucy, what's wrong?'

âNothingâ¦' Lucy started to say, but her mum interrupted her.

âI know something's the matter. You've been so quiet the last few days. It's not like you at all.'

Lucy stared at her hands. Her mum covered them with her own. âIf you tell me I might be able to help,' she said when Lucy didn't speak.

âYou can't,' Lucy muttered. âNo one can.' She sighed. She couldn't tell her mum, but she could see how worried
she was. âDon't worry, Mum. It's not important.'

âYou're not being bullied at school?' her mum asked. âOr made to do something you don't want?'

âNo,' Lucy said quickly. âIt's nothing like that. It's nothing to do with school at all. I promise.'

Her mum looked at her for a long moment. âAll right,' she said at last. âI'm not going to make you talk about it if you really don't want to.' She squeezed Lucy's hands. âI know you're growing up and you have to work some things out on your own now. But Dad and I are always here for you. You know that. Even if we can't help we can always listen. You're never on your own.'

Lucy shut her eyes and for a few moments felt all her worries fade away. She was home and she was safe. For the moment at leastâ¦

Lucy felt slightly better for the rest of the day. Although she knew she couldn't tell her mum what was wrong, it was comforting in a way to know that her mum was there for her. And her dad and Hope â even Rachel, she realized, despite all her sister's teasing. She might not be able to tell them about her stardust life, but Lucy knew they loved her. For the first time ever, she found herself realizing how glad she was that she had her normal home life as well as her exciting stardust life. After all the tension of the night before, and all her fears
and worries, it felt strangely comforting to spend the day with her mum doing ordinary things like tidying her room, making biscuits, watching TV in the afternoon â and having her mum come into her room to say good night. 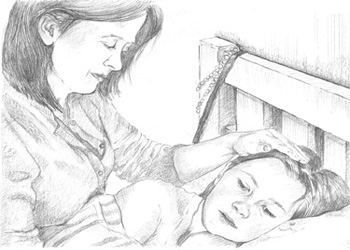 âI'll try,' Lucy said. It was the feast that night, but with everything that had been happening she wasn't looking forward to it.

She hugged her mum. âI love you, Mum.'

âLove you too,' her mum said, kissing her hair.

Lucy glanced out of the window. The sky was covered with clouds. It looked dark and oppressive. She shivered. It was almost as though the night was waiting for somethingâ¦

Lucy waited for her parents to go to bed and then flew next door. Allegra was waiting for her. âThere's a really strange feeling in the air, isn't there?'

Lucy nodded. Her skin was prickling uncomfortably. Being a stardust spirit, she
usually loved the dark, but as they flew across the fields towards the woods, she found herself glancing at the shadows. Maybe it was because the clouds were covering the stars and so the night was blacker than normal, but she felt uneasy, as if danger was lurking.

âI hope it doesn't rain again tonight,' Allegra said, looking at the heavy sky. The air seemed to press in on them. Lucy could feel the magic crackling around them.

Something's happening
, she thought.
Something to do with magic
. In the distance there was an ominous rumble of thunder.

âOh, no!' Allegra said in dismay.

âThere's going to be another storm!'

They swooped into the trees.

They both gasped as the loudest clap of thunder they had ever heard exploded directly over their heads. A fork of bright white lightning jagged down from the sky into the woods. There was a loud bang and suddenly a column of flames shot up into the air. âA tree's been hit!' Allegra exclaimed. âCome on! We'd better go and check it out!'

They raced towards the fire. It was coming from a nearby grove of alder trees and hawthorn. âThere!' Lucy exclaimed, spotting a tree on fire.

She swooped towards it. They would have to put the fire out in case it damaged the surrounding trees and bushes. The tree that had been hit was on the edge of a small clearing. It was burning brightly, orange flames licking
up into the black sky. Lucy started in shock as she saw two figures standing in the dancing shadows of the flames. One of them was pointing their hands at the blaze.

With a shock of recognition, Lucy realized that it was Joanna and Robyn. Magic was beating through the air. She could feel it swirling and growing. What was going on?

âWhat are you doing?' she cried.

âPutting the fire out!' Joanna shouted. She waved her hands and the fire died down until there were just a few flames licking at the grass. âWe were just flying past and we saw the flames.' She looked round, her face uneasy. âWe should get away from here. Something strange is happening. Can you feel it in the air?'

Lucy landed. âYes.' A wave of iciness swept over her. She stepped back. âIt's you, isn't it? You're doing something!'

âLucy, shut up!' Robyn said fiercely. âYou don't know what you're talking about.'

âI do,' Lucy exclaimed. She looked at Joanna. âYou're a dark spirit!'

âA dark spirit!' Joanna sounded as if she couldn't believe her ears. âButâ¦'

For a moment, Lucy felt her nerve fail
her, but she made herself look Joanna straight in the eye. âYes!' she declared. âWhy else are you stopping my magic? I know it's you!' she went on. âYou're always there! Don't try and say it's not.'

Joanna ignored her. âBut I am not a dark spirit.'

âMum, be quiet!' Robyn said, looking really upset. She flew into the air and 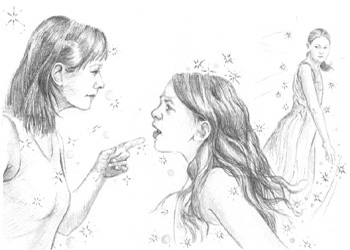 glanced round to see if her mum was following. âI'm going!'

âWait for me in the next clearing!' Joanna commanded. âDon't go any further on your own. I need to talk to Lucy. I will
not
be accused of being a dark spirit!'

Joanna sounded so angry that Lucy began to feel a prickle of uncertainty. She was right, wasn't she?

âWhat have you been doing to me?' she demanded.

Joanna hesitated and then sighed. âI have been stopping your magic from working, Lucy,' she admitted. âBut it's not because I'm a dark spirit. It's becauseâ¦' she took a deep breath. âIt's because I've been trying to help Robyn.'

âBut how? Why?' Allegra sounded as confused as Lucy was feeling.

âIt's hard for Robyn,' Joanna said, rubbing her forehead. âI move around so much with my job and she always has to make new friends. It makes it easier if you are powerful and can use magic well. People are interested in you â they accept you more.'

âIs that why you make Robyn practise so much?' Allegra asked.

Joanna nodded. âRobyn is naturally powerful, but by practising she has learned how to do things that impress people. It helps her fit in when we move to new areas. Others her age are keen to be her friend. Adults are interested in
her. She doesn't get picked on or bullied.' She looked from Lucy to Allegra. âI never want her to go through the awfulness of thatâ¦' Her voice trailed off.

Lucy frowned. It sounded like Joanna was speaking from her own experience.

âPeople can be cruel,' Joanna went on slowly. âWhen I was at school I was bullied by a group of girls. Nothing really bad. They never hit me or anything, but they made my life miserable. My parents were older than normal parents. I wasn't into clothes or music. I worked hard and tried to do well. The girls who picked on me teased me and called me names. I hated it.' She glanced at Allegra. âYour mum used to stand up for me, but the only thing that made it bearable was knowing that each night I could become
a stardust spirit. I'd do anything to help Robyn avoid being bullied like I was.'

Lucy felt bewildered. She would never have imagined that Joanna had been bullied, or that her determination to make Robyn practise her magic had anything to do with her wanting Robyn to fit in. But now she knew, she could see that it made sense â Joanna's insistence that Robyn made friends, her pride in Robyn's magic, Robyn's cool clothes and perfect appearance. She frowned. âBut why have you been doing stuff to me?' she asked.

Joanna sighed. âYour magic's so strong, Lucy. I knew it would be much harder for Robyn to impress people with her magic here. That first night, when we were fighting the storm, I suddenly realized that if I could stop your magic and if Robyn used her powers, well then people would be interested in her and impressed with what she could do. So I blocked the magic coming into you. I did it a few other times too â just to help her.'