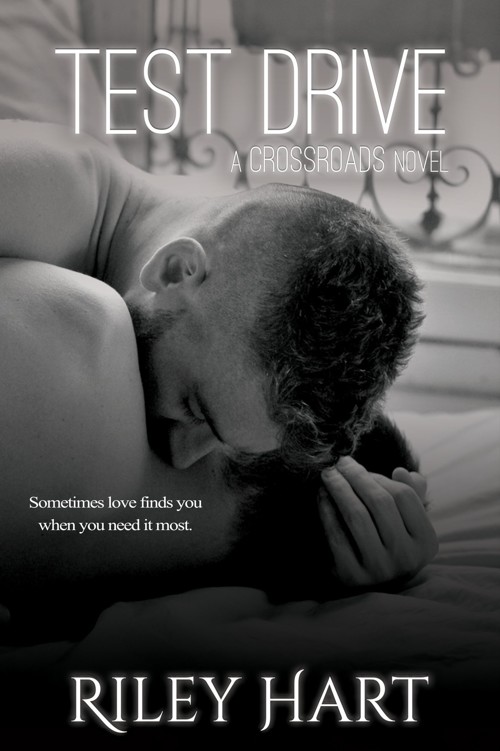 No part of this book may be used, reproduced or transmitted in any form or by any means, electronic or mechanical, including photocopying, recording, or by any information storage and retrieval systems, without prior written permission of the author, except where permitted by law.

This book is a work of fiction. Names, characters, places and incidents are products of the author’s imagination or are used fictitiously. Any similarity to actual persons, living or dead is coincidental and not intended by the author.

All products/brand names mentioned are registered trademarks of their respective holders/companies.

Special thanks to Riley’s Rebels member Robyn for letting me use your name. Also, to Carly Rose and Amanda Souliotis for all your help with the details about chemo, hospice and cancer. Any mistakes are my own.

To Ryan Burdett. Thank you for the support, conversations, and for helping me choose Drew’s career. You are a joy to talk to.

Justin Evanson sat in the busy club and eyed the guy seated down the bar from him. He hadn’t kept his eyes off Justin all night, and Justin hadn’t been inclined to take his eyes off him either.

His dad, who had been the picture-perfect father from the moment he’d come into Justin’s life at eight years old was dying—and his vision of that man was shattered. He’d discovered that his dad wasn’t who he thought he was. When he’d finally made his way into Justin’s life, he’d done so on the heels of abandoning a son and daughter, and until he realized he didn’t have much time left, had pretended they didn’t exist.

Now, Justin was in a new town, in a new fucking state, waiting for his father to find a way back into the lives of the kids he’d abandoned, and he had no idea how he really fit into that equation. How would he fit in with his father’s new family, which was really his original family?

His older sister, Shanen, had gotten married today. His older brother, Landon, had walked her down the aisle to give her away. Justin had spent the day playing cards and watching television at a piece of crap, yellow table with his depressed father, who was upset he couldn’t be there. They didn’t know their father was back.

They didn’t know Justin existed at all.

Talk about a shitty fucking hand to be dealt. He figured he deserved an anonymous hookup with a sexy guy he met in a club, and the blond with the strong jawline and hooded eyes just might be exactly what he was looking for.

Sex was a whole lot more fun than dealing with the other shit.

Justin couldn’t imagine how Shanen and Landon would feel when they found out about him—and more importantly, when they found out about their father. His chest felt hollowed out just thinking about the situation, thinking about the family he didn’t know. The things they’d missed—holidays and summer vacations. Fights and laughs and all the things that came with family. Basically, he was feeling really fucking sorry for himself. Hence the reason he sat in a club hoping to fuck the night away. It was the least he deserved.

After finishing his drink, Justin stood up and walked toward the sexy blond. For a brief second, he thought the guy was going to bolt, but he didn’t move, just continued to follow Justin with his eyes as he made his way to him.

“Hey.” Justin looked down at the guy as he swished whatever he was drinking around in his glass. His blond hair was short, buzzed closer around the edges and slightly longer on top. Every now and then his face would change colors—blue, red, green, as the strobe light shined around the room.

The blond nodded. “Drew.” He had a deep, sexy voice. All gravelly and…almost commanding, but somehow a little unsure at the same time. It got his dick hard, but then again, he hadn’t had sex in a while, so he wasn’t sure that was a difficult feat.

“You looking?” Justin asked. There was no reason to beat around the bush. Drew would say yes or no. They’d fuck or not. He wouldn’t pretend this was anything other than what it was.

He watched as Drew’s steel-blue eyes darted around the club—toward the door and then back at Justin again. Had he read the guy wrong and he wasn’t interested? Or hell, maybe he just wasn’t into hooking up with someone he didn’t know. Some people were and some weren’t. He didn’t judge one way or the other.

After bringing his glass to his lips, Drew downed the rest of his drink in three long swallows. He set the glass down a little hard on the counter and then flinched. “Let’s dance,” he finally said, a slight quiver to his voice.

Fuck. Was he in the closet? The thought made Justin’s gut cramp. He hated it when people had to live like that. Luckily, it had never been a problem for him but he knew it was for too many people.

Whether Drew was in the closet or not, there was one thing he had to confirm. “You married? Man or woman, it doesn’t matter. Are you in any kind of relationship at all?” He didn’t fuck around with a man who was with someone else. That’s how he’d been born. His dad had cheated on Landon and Shanen’s mom, and then gone back to her. Justin’s mom didn’t know how to get a hold of him, so she raised Justin alone until he was eight and she found out where his dad was. He’d gained a father around the same time Landon and Shanen had lost theirs. It didn’t matter to him that pregnancy obviously wasn’t an issue here, he didn’t touch someone who was cheating. He made damn sure he asked any time he hooked up.

“Nope. Are we going to dance or not?” Drew replied.

Jesus, he was sexy. He had narrow eyes like he hid secrets inside of them, and yeah, that mouth. It was pretty as fuck. He had nice, full lips that Justin wouldn’t mind seeing wrapped around his dick. None of that had anything on his jawline, though. It was defined, square and strong, with some sexy stubble Justin wanted to feel against his skin. Drew had a good body, too. Justin could tell he kept in shape. “Yeah, we’re dancing.”

Justin stepped back, while Drew stood and immediately started walking. Justin followed him through the packed club. They weaved their way around men kissing, dancing and talking.

Drew didn’t stop moving until he found what was probably the loneliest, darkest corner of the club. It was Justin who grabbed hold of Drew and pulled him close. If they were going to dance, he wanted to feel the other man. He’d always been like that—he liked touch. Loved the feel of a man against him, inside him, around him. He wasn’t picky on the how of it.

They both began moving together, slower than the music that pumped from the speakers, and vibrated through Justin. He ran his hands down Drew’s muscular back. His T-shirt was slightly wet with sweat, but that just made Justin pull him closer, inhale deeper.

Drew felt good, smelled like soap and alcohol and clean sweat. He let his hands travel down Drew’s back until they landed on his ass. Drew groaned as he palmed the globes. Oh yeah. He definitely worked out. He wasn’t a muscle-head, but there was no doubt that Drew was physical. He could feel it in every twist and turn and the tight constriction of his body movements.

He slid one of his legs between Drew’s, pulled their bodies flush against each other, felt Drew’s erection rub against his dick. That was all it took for blood to travel to Justin’s crotch as his own cock grew and hardened even more than it had already. Why were they wasting time? He wanted to fuck, to come, to forget about all the other shit he was dealing with.

“Let’s get out of here, and I’ll take care of that hard-on for you. It feels like a nice fucking dick.” The second Justin’s final word left his mouth, Drew’s lips took his. It was a hungry kiss, an urgent kiss. His tongue demanded entrance and Justin opened up and invited him inside.

Their tongues dueled, both of them obviously ravenous for each other. Justin wanted to devour him. It wasn’t Drew specifically, even though the man was fucking gorgeous. He just wanted someone, something to take his mind off of everything else. Off his father dying and his fear over how his siblings would react to finding out about him. Their father had left them and ended up raising Justin. How could they not hate him?

He groaned into Drew’s mouth when he pressed the palm of his hand against Justin’s erection. They kept moving, Drew slowly backing him farther into the corner.

The pressure against Justin’s dick got stronger and stronger. He squeezed Drew’s ass tighter, and this time, he was the one who got to eat Drew’s groan.

They kept kissing, kept rubbing against each other, and then both of Drew’s hands were on him. He stood in front of Justin, who had his back against the corner. His fingers fumbled with Justin’s button, then his zipper.

He almost stopped him, almost told him they could go somewhere else, but hell, why couldn’t they do this first and then fuck later? Coming twice was always better than coming once, right?

As Drew opened Justin’s pants and shoved a hand inside, Justin went for the button and zipper on Drew’s jeans. He opened them much quicker than Drew had his, and then they were rubbing each other’s cocks and eating at each other’s mouths. It didn’t matter that they were in a busy club. They’d hidden themselves and what they were doing as best as they could. The end result was all Justin could concentrate on.

Drew’s hand has sweating when he squeezed Justin’s cock. He had callouses on his palms, right beneath his fingers. The rough skin felt good against his aching erection.

Justin had never done this before. He’d fucked men he didn’t know, but jerking off in the corner of a club was new for him…and exciting. His heart beat against his chest, as his dick got harder by the second.

Drew was thick in his hand, thick and long and hot. His skin seared Justin and he couldn’t wait to taste him. This was exactly what he needed. The more he thought about it, the fuller his balls got. They pulled up tight as Drew jacked him faster.

Justin squeezed with more pressure, picked up the pace and it didn’t matter that they were going at this dry. It was fucking working.

Drew came first. His body went rigid. He pulled his mouth away and whispered, “Oh fuck,” as he shot into Justin’s hand. The raspy pleasure in Drew’s voice went straight to Justin’s balls and he let go, spurting two long ribbons of come into Drew’s hand. The pressure was still there, though. He wanted more, even as his body wanted to slump against Drew’s.

Ghost Moon by John Wilson
Tears for My Master: Cat's First Punishment by Lara Simon
Eveillez: Deny Your Blood Lust by Hussey, C.D.
Touch of Desire by Lia Davis
The Fortress of Glass by Drake, David
Una Pizca De Muerte by Charlaine Harris
The Heart is a Lonely Hunter by
The Broken Ones by Stephen M. Irwin
No More Secrets by Terry Towers
The Armor of God by Diego Valenzuela