The Knight in History (9 page)

The
vidas
follow a fixed formula: the poet’s country of origin, his social condition, an outline of his career with emphasis on his amorous adventures, and a brief criticism of his talents as poet and musician. Thus we are told where Arnaut Daniel came from, what social class he belonged to, the story of his life in brief including a frustrated love affair that supposedly inspired his poetry, and an evaluation of his work: that his versification was elaborate and his poems were consequently hard to understand. Neither the
vidas
nor the
razos
(stories or themes) that often accompanied them in the manuscripts, and that were evidently recited by jongleurs to introduce the poet’s songs, are wholly reliable sources. Both are often demonstrably assembled and elaborated from scraps of information in the poems or in the verses of other poets, or even adapted from folklore or fiction. Arnaut’s
razo
about the poetic competition at the court of Richard Lionheart is an anecdote that is also told about another troubadour. Nevertheless, some facts can be inferred from the
vidas
and
razos
about the class origins of the troubadours.

The troubadour was a knightly poet. He wrote for and about knights; he had the status of a knight even though his father was not always a knight. Many of the
vidas
state that the subject was a knight or son of a knight—often with the adjective “poor” preceding the “knight.” Some troubadours were from castellan families, and occasionally there is evidence that the families had fallen on hard times. A few were great lords, usually patrons of troubadours, who had taken up poetry themselves: Richard Lionheart; Alfonso I of Aragon; Raimbaut d’Aurenga (of Orange); Ebles of Ventadorn; Savaric de Mauléon, seneschal of Poitou; Enric I, count of Rodez; Guillem, lord of Les Baux; Albert, son of the Marquis de Malespina. Some troubadours were middle class: the son of a cloth merchant, of a tailor, of a furrier, of a goldsmith, or simply “of a bourgeois.” Some were clerics—monks, priests, or canons who had abandoned their profession, having, in the words of one
vida
, “fallen in love with the vain things of this world.” A few were “of low estate,” including, if we are to believe their
vidas
, two of the greatest, Marcabru (fl. 1129–1150), left on the doorstep of a rich man and by implication illegitimate,
9
and Bernart de Ventadorn (fl. 1150–1180), whose father was “a serving man who was a stoker and heated the oven to bake the bread in the castle [of Ventadorn].”
10
One troubadour, son of a poor fisherman, learned to play the viol and compose songs, and became a jongleur, whereupon “the dauphin [count] of Auvergne took him for his knight and clothed and armed him and gave him lands.”
11
Eight of the
vidas
describe women troubadours
(trobaritz)
, all depicted as noble, well-educated, and most as “very beautiful.”
*

In almost every
vida
the troubadour’s knightly virtues are stressed: he was “a courtly man and eloquent,” “a good knight and a good warrior,” “a poor knight but clever and well-bred and skilled at arms,” “a man of
pretz
and
valors
” (excellence and worth), or “a gentleman and handsome and charming and with natural sense.” The great lords who were troubadours and patrons of troubadours had an additional knightly virtue: they were “
larcs
,” generous, openhanded. 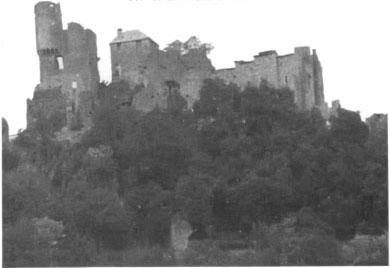 RUINS OF THE CASTLE OF VENTADORN (VENTADOUR), IN SOUTH-CENTRAL FRANCE, WHERE TROUBADOUR BERNART DE VENTADORN WAS BORN, SON OF A CASTLE SERVANT
.

Whether the troubadours originally wrote down their poems, or whether the songs were transmitted orally until their thirteenth-and fourteenth-century transcription is not known, but the versification is at times so complex that oral composition seems impossible. Yet some troubadours, like many of their fellow knights, may not have been literate. The
vidas
describe many as
ben enseignatz
, which could mean “well educated” or simply “well bred.” Clerics who became troubadours were usually described as “lettered,” implying Latin scholarship, as in the case of Arnaut Daniel.

The great majority of troubadours made their living from their poetry. Most seem to have belonged to the category of younger sons of knights or castellans who had to make their way in the world or were members of knightly families who had lost their lands. A few were sons of the bourgeoisie, perhaps looking for a way to better their social position. They were men of talent; as their
vidas
described them, they could “sing and compose well” and “play the viol,” they had “good natural sense,” they were “clever,” “charming,” “wise,” and “eloquent.” Turning troubadour was a means of upward mobility open to a man of intelligence, artistic ability, and social skill. All one had to do was find a patron.

In a few cases, the
vidas
tell us that a poor knight was taken in hand by a richer knight or great lord, and “clothed and armed” and given lands. More often the knight had to find his own sponsors, traveling from court to court, spending a few weeks or months, sometimes years, and then moving on. The
vidas
are full of their subjects’ movements “from castle to castle” on their “travels through the world”—the world of the troubadours, comprising southern France, Lombardy, and northern Spain. That troubadouring was a viable profession supporting a large number of practitioners is testimony to the material wealth and taste of twelfth-century civilization in southern France. Has any modern time and place, even with the aid of printing, produced more poets, including perhaps a dozen of the first order? Certainly none has permitted a larger number of poets to make their living by writing poetry.

A scholar has compared troubadour poetry to a flower that seems suddenly to appear without root or stalk but that “buds, opens out and blooms in perceptible stages in the south of France in the twelfth century.”
13
Root and stalk have been sought in classical literature, Christian thought, and the poetry of Moorish Spain. Ovid (43
B.C.–A.D.
18), a powerful influence on all medieval literature, was well known to the troubadours, as probably were early medieval poets who wrote in Latin, such as Boethius (c. 480–524), Venantius Fortunatus (c. 530–c. 603), Alcuin (c. 735–804), and Hrabanus Maurus (776–856). Some of the troubadour music came directly from the Church, as did certain verse forms; even the terms in which earthly women were flattered in troubadour poems were often borrowed—daringly—from those used to praise the Virgin Mary: the troubadour “worshiped” his lady, there was “no woman like her.”

Some scholars, on the other hand, consider the eleventh-century
zajal
and
muwashshab
of Muslim Andalusia as the source of troubadour poetry. Written to be sung, accompanied by lute or rebec (an early violin), these poems were distinguished by their lively measure, elaborate rhyme scheme, and sophisticated tone. Their themes were unrequited love, self-sacrifice, eternal fidelity, and love supreme over all else in the world. (There was even a Muslim forerunner of the women troubadours, blue-eyed, red-haired Wallada, daughter of Caliph Al-Mustaki and a Christian slave, herself a patron of scholars and poets.)

The cultural interchange between Muslims and Christians in Spain reached France by way of the French knights who fought in the Reconquest. Some took Muslim slaves back to France, or even married Muslim ladies. When the French captured Barbastro in northeast Spain in 1064, each knight was awarded a house with all it contained—furniture, servants, women, and children. A dispossessed Arab sent a Jewish merchant to ransom his daughters. The Jew found the conqueror in Moorish dress, seated on a divan, surrounded by Muslim girls. He refused all offers of ransom, saying that he had married one of the daughters and hoped she would give him sons. “Her Muslim ancestors did this with our women when they took this country. Now we do likewise.” He then turned to the girl and in broken Arabic told her to take her lute and sing some songs for the gentleman. The Jew added, “I was surprised and pleased to see the knight show great enthusiasm as if he understood the words—though he continued drinking.”
14

The expedition against Barbastro was led by the duke of Aquitaine, whose son Guillem (William) IX (1071–1127) has been called the “first troubadour,” on the strength of his being the first whose verses have survived. The chronicler Ordericus Vitalis pictures Guillem, whom he describes as “gay and lighthearted,” entertaining “kings and magnates and throngs of Christians” with stories of his misadventures in the Crusade of 1101 in the Holy Land “using rhythmic verses with skillful modulations,” as if such entertainment was already an accepted tradition.
15

In the words of Guillem’s
vida
, he was “one of the greatest courtiers in the world and one of the greatest tricksters of ladies, and a good knight at arms, and openhanded in giving, and he traveled a long time through the world to deceive women.”
16
Chronicler-cleric William of Malmesbury characterized him more severely as “a buffoon and a man so inclined to evil that he indulged in all manner of vices before his return from Jerusalem…. He took nothing seriously, he turned everything into a joke and made his listeners laugh uncontrollably.”
17

Five of Guillem’s eleven surviving poems
18
—the best known—are burlesques, including the riddle poem “
Farai un vers de dreyt nien
” (I’ll write a verse about nothing at all) and the Rabelaisian “
Farai un vers, pos mi sonelb
” (I’ll write a verse, then fall asleep), with its tale of a knight who pretends to be a deaf-mute in order to spend a week in “dalliance gay” with two married ladies who wish to ensure discretion. In another equally lusty song, “
Companho, tant ai agutz d’avols conres
” (Comrades, I have had such sorry company), he rails in earthy terms against the husband who too closely guards his wife’s virtue; he hates a
cons gardatz
(a guarded cunt) as much as a fishing hole without fish; the man who first guarded cunt should have perished,

For never was there a servant or guard

Who was worse to his lord

But I shall tell you about the cunt, what its nature is

As a man who has done bad things with it and taken worse from it:

Although any other thing decreases if someone steals from it, the cunt increases.

Thus in a private thicket when the wood is cut, two or three trees grow up where one stood before,

And when the wood is cut down, it grows back even thicker,

And the lord does not lose his revenue or his income from it;

The devastation is lamented wrongly if there is no damage at all.

It is wrong to lament the devastation if there is no harm at all.
19

One of William’s poems is a
congé
, a farewell poem written at a time when he believed that he was dying. The remaining five are on themes that became characteristic for troubadours: “
d’amor e de joy e de joven
” (of love and joy and youth). One of his verses provides the first example in the vernacular of one of poetry’s great favorite devices, the opening salute to spring, “
Ab la dolchor del temps novel
” (In the sweetness of the new season). After the singing birds and flowering hawthorn, the poem ends characteristically with a jolly reference to physical love:

(Let others brag vainly about love,

The early troubadours called all their poems simply
vers
, but Guillem IX’s five love poems belong to the most popular troubadour genre, the
canso
. By mid-century other forms had emerged: the
sirventes
(satire),
tenso
(debate),
alba
(dawn song),
pastorela
(pastoral, usually a dialogue between a virtuous shepherdess and a seducing knight), the
cobla
(epigram), and the
planb
(lament on the death of a great personage).