The Knight in History 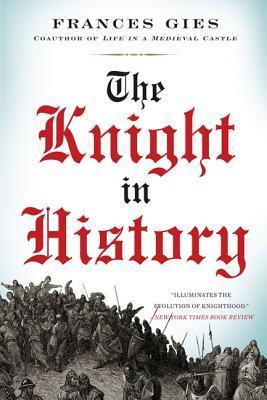 The Knight in History

3
/ Knights of the First Crusade

4
/ The Troubadours and the Literature of Knighthood

5
/ William Marshal: Knighthood at its Zenith

7
/ Bertrand du Guesclin: a Knight of the Fourteenth Century

8
/ English Knights of the Fifteenth Century: Sir John Fastolf and the Pastons

9
/ The Long Twilight of Chivalry

Other Books by Frances Gies

THE BATTLE OF HASTINGS

NORMAN SHIPS LOADED FOR THE INVASION OF ENGLAND, 1066

VASSAL SWEARS FIDELITY TO HIS LORD

KNIGHTS FORAGING ON THE FIRST CRUSADE

EPIDEMIC AMONG THE CRUSADERS AT ANTIOCH

RUINS OF THE CASTLE OF VENTADORN

TROUBADOUR BOUND WITH A GOLDEN THREAD OF LOVE

BATTLE OF YVAIN AND GAWAIN

MARRIAGE OF YVAIN AND LAUDINE

THE KNIGHTLY VIRTUES:
THE KNIGHT RESCUES A MAIDEN IN DISTRESS

HOUSE IN MARTEL, FRANCE, WHERE THE YOUNG KING DIED

KNIGHTING ON THE BATTLEFIELD

SIEGE OF A TOWN, FIFTEENTH-CENTURY

SPANDREL OF THE MAIN GATEWAY OF ST. BENET’S ABBEY

EGYPT: THE CRUSADE OF ST. LOUIS

FRANCE IN THE HUNDRED YEARS WAR

What is a Knight?

YOU CALL YOURSELF KNIGHT; WHAT IS THAT
?

O
F ALL THE many types of soldier that have appeared on the military stage in the course of time, from the Greek hoplite, the Roman legionary, and the Ottoman janissary to members of the specialized branches of modern armed forces, none has had a longer career than the knight of the European Middle Ages, and none has had an equal impact on history, social and cultural as well as political.
1
Knights fought on the battlefields of Europe for six hundred to eight hundred years, some scholars dating their emergence as early as the eighth century, some as late as the tenth. They were still prominent, though increasingly obsolescent, in the sixteenth century, long after the introduction of firearms and the advent of the national state.

Originally a personality of mediocre status raised above the peasant by his possession of expensive horse and armor, the knight slowly improved his position in society until he became part of the nobility. Although knights remained the lowest rank of the upper class, knighthood acquired a unique cachet that made knighting an honor prized by the great nobility and even by royalty. This cachet was primarily the product of the Church’s policy of Christianizing knighthood by sanctifying the ceremony of knighting and by sponsoring a code of behavior known as chivalry, a code perhaps violated more often than honored, but exercising incontestable influence on the thought and conduct of posterity.

The institution of knighthood summons up in the mind of every literate person the image of an armor-plated warrior on horseback, with the title “Sir,” whose house was a castle, and who divided his time between the pageantry of the tournament and the lonely adventures of knight-errantry. The image has the defect of being static, and it represents a concept that belongs more to legend and literature than to real life. Yet the real historical figure of the knight is not totally at odds with the popular image. He did indeed wear plate armor, but plate superseded mail only late in his long career. The “Sir”—“Messire” in French—also came late and in England still exists as a title of honor or of minor nobility. A knight sometimes lived in a castle, but the castle was rarely his own. He participated in tournaments, but the tournament’s character as pageant developed only in its decadence. He was certainly prone to adventure in his often short life, but nearly always in company and in search of income rather than romance.

In England and America the popular image of the knight is pre-ponderantly English, thanks to the overpowering appeal of the King Arthur story. Real knights, however, originated in France and were unknown in England until the Norman Conquest. The French-Welsh-English creators of the Arthur literature, who grafted onto a grain of historical fact a mass of legend about a sixth-century British chieftain, ended by creating a bizarre time warp in which knights in gleaming plate armor galloped anachronistically through the primitive political countryside of post-Roman Britain.

Though change was continuous, one may usefully divide the knight’s long history into three stages: first, the emergence of the armored, mounted soldier in the turmoil-filled ninth and tenth centuries; second, the development of the mature institution of knighthood in the eleventh through the thirteenth centuries, the age of the architects of the King Arthur legend; and third, the decay of the institution as a consequence of the rise of new social forces in the late Middle Ages and early modern times.

The knight may be defined from three different standpoints, each of them important: the military, the economic, and the social.

He was first and foremost a soldier, as identified by the Latin term for him,
miles
, and the Anglo-Saxon
cniht
, cognate of “knight.” He was invariably mounted; in most languages the medieval vernacular word that replaced
miles
denoted horseman: French,
chevalier
; German,
Ritter
; Italian,
cavaliere
; Spanish,
caballero
. Again invariably, he was clad in armor. Thus militarily he was an armored cavalryman.

Economically, the knight was a component of the system known to historians as feudalism. In this dominant economic (and political) order of the Middle Ages, a lord granted land to a vassal in return for military and other less important services. Lord and vassal swore an oath, of protection and support on the part of the lord, of loyalty on the part of the vassal. At the height of feudalism, the knight was the cornerstone of the institution. He may be said to have formed its basic currency. The lord’s grant of land to his vassal was typically in return for the service of a specified number of knights, whose swords the vassal was able to secure in his turn by granting land to them through a similar exchange of oaths. Lord, vassal, and knight were free men, tied together by their mutual promises.

The economic prototype of the knight, then, was a free man, holding land, and owing feudal military service. Details of practice varied widely. In Germany up to the thirteenth century some knights were household retainers who shared characteristics with serfs. Throughout Europe and throughout the Middle Ages, many knights were landless and not strictly speaking part of the feudal system. Finally, in the late Middle Ages, knights ceased to perform feudal military service in return for grants of land and became plain professional soldiers, differing only in prestige, equipment, and pay scale from other men-at-arms.

Socially, even the protoknights of the early period were set apart by their expensive equipment and horses. Gradually professional pride matured into class consciousness, which was enhanced by the Church’s sponsorship. The soldiers of the earlier period may or may not properly be called knights, but the full development of knighthood came only with the acquisition of class identity.

The Western European knight may be summarized as a mounted, heavily armed and armored soldier, in most times and places a free man and a landholder, and, most significantly, a member of a caste with a strong sense of solidarity.

This book will attempt to trace the development of the medieval knight from first appearance through rise to gradual eclipse, and to assess his impact on history, using real-life knights as examples.

It will first describe the genesis of the knight and his tenth-century manifestation, a crude and violent figure virtually uncurbed by a society that had lost control over its military class. The efforts of the Church first to tame and then to harness the brute bestowed on him a dawning consciousness of belonging to an “order,” a chosen cadre with duties and disciplines prescribed by the Church, to which he came to owe a special allegiance.

The maturing eleventh-century knight, his self-image further enhanced by the designation “soldier of Christ,” a radical concept of Pope Gregory VII, undertook the unparalleled adventure of the First Crusade. Social and economic motives as well as religious ones impelled him. One motive proved ephemeral: many landless knights went to the East with thoughts of acquiring estates, but few remained. Nevertheless, the Crusade gave further impetus to the rise of the knightly class, through the broadening effect of travel, which helped lift the knight from petty provincial to European gentleman-soldier, and through his role in “the army of the Lord,” combating “God’s enemies.”