The Knight in History (4 page)

How much the Church’s sanctions actually affected the warriors’ behavior is conjectural, but their impact on knightly psychology and hence on the institution of knighthood was significant. The collective oaths helped to create a class consciousness that included acknowledgment of a personal responsibility to the Church and to the unarmed population. From prohibiting attacks on the clergy and the poor, the Church next advanced to prescribing a knightly mission as active protector of both. A council in Narbonne in 1054 expanded the terms of the Truce of God in these words: “Let no Christian kill another Christian, for there is no doubt that he who kills a Christian spills the blood of Christ.”
29
This startling assertion, which few knights could accept literally, carried an implication with enormous potential consequence: the knight was justified in exercising his profession of war only if he did it against the enemies of Christ.

The Church had already moved toward sanctifying the knight with formulas for blessing his sword that had begun to appear in the tenth century and became common in the eleventh. Shortly after 1070 the ceremony of knightly investiture known as “dubbing,” usually in a church, is first mentioned in French sources.
30
With this ritual of initiation the Church adopted knighthood, just as it had many other lay institutions, such as pagan holidays and sanctuaries.

The Church had first confronted the knights and imposed limits to their depredations. It had then prescribed an ascetic discipline for them as a group, while persuading them that they were at heart good and honorable and deserving of its blessing. Logically, it remained only to enlist their services for the Church’s own purposes. From the Council of Narbonne to that of Clermont and the concept of the knight as the “soldier of Christ,” the holy Crusader, was the final step.

Knights of the First Crusade

DO YOU KNOW WHAT GOD HAS PROMISED THOSE WHO TAKE THE CROSS
?

BY GOD! HE HAS PROMISED TO REWARD THEM WELL! PARADISE FOR EVERMORE
.

LET NONE OF YOUR POSSESSIONS DETAIN YOU, NO SOLICITUDE FOR YOUR FAMILY AFFAIRS, SINCE THIS LAND WHICH YOU INHABIT, SHUT IN ON ALL SIDES BY THE SEAS AND SURROUNDED BY MOUNTAIN PEAKS, IS TOO NARROW FOR YOUR LARGE POPULATION; NOR DOES IT ABOUND IN WEALTH; AND IT FURNISHES SCARCELY FOOD ENOUGH FOR ITS CULTIVATORS. HENCE IT IS THAT YOU MURDER ONE ANOTHER, THAT YOU WAGE WAR, AND THAT FREQUENTLY YOU PERISH BY MUTUAL WOUNDS. LET THEREFORE HATRED DEPART FROM AMONG YOU, LET YOUR QUARRELS END, LET WARS CEASE, AND LET ALL DISSENSIONS AND CONTROVERSIES SLUMBER. ENTER UPON THE ROAD TO THE HOLY SEPULCHRE; WREST THAT LAND FROM THE WICKED RACE, AND SUBJECT IT TO YOURSELVES. THAT LAND WHICH AS THE SCRIPTURE SAYS “FLOWETH WITH MILK AND HONEY” WAS GIVEN BY GOD INTO THE POSSESSION OF THE CHILDREN OF ISRAEL
.

JERUSALEM IS THE NAVEL OF THE WORLD; THE LAND IS FRUITFUL ABOVE OTHERS, LIKE ANOTHER PARADISE OF DELIGHTS
.

—Urban II at Clermont, according to the
Historia Hierosolymitana (History of Jerusalem)
, by Robert the Monk

O
N NOVEMBER 27, 1095, Pope Urban II preached the First Crusade at Clermont, in central France, in an open field outside town, in a scene reminiscent of the Peace of God councils. Chroniclers report that the vast crowd wept and applauded by stamping on the ground,
1
their enthusiasm culminating in a great cry of “God wills it!”
2
Adhémar, bishop of Le Puy, who later became the pope’s legate, a churchman of noble origin who had been trained as a knight, came forward, knelt, and took the vow to go to Jerusalem. The pope gave him his blessing and named him leader of the Crusade.
3
Urban then “instituted a sign well suited to so honorable a profession by making the figure of the Cross…the emblem of the soldiery…of God. This…he ordered to be sewed upon the shirts, cloaks, and tunics of those who were about to go.”
4
Nobles and knights then followed Adhémar’s example, kneeling to take the vow.

During the eight subsequent months that Urban toured France preaching the Crusade, thousands of knights enlisted under the banners of great regional princes such as Count Raymond of Toulouse, Count Hugh of Vermandois (brother of the king), Count Godfrey of Bouillon, Count Robert of Flanders, Duke Robert of Normandy, and Bohemund d’Hauteville, the Norman lord of Taranto in southern Italy. Five knightly armies took the field, setting out in 1096 by land and sea for Constantinople, their base of operations for the offensive against the Saracens.
5

The knights came from France and neighboring lands: Lorrainers, Normans, Flemings, Burgundians, northern French, southern French, Germans, Italians. Their condition varied from region to region as to social standing, life-style, and the degree to which they were involved in a feudal hierarchy, but all had been affected by changes that had taken place since the year 1000 in knights’ status, in the laws of inheritance, and in the philosophical concept of knighthood. These changes, in fact, combined to supply much of the motivation for the Crusade. 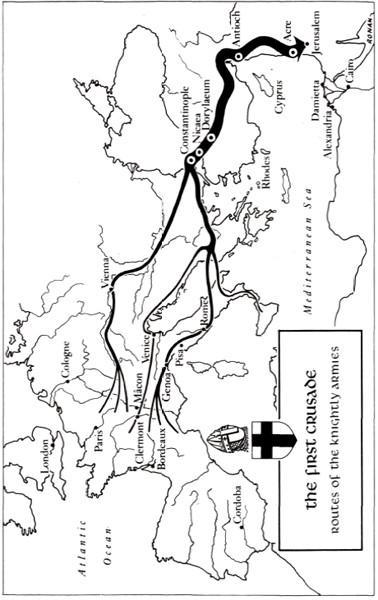 Contemporary chronicles focus on the princely leaders, leaving the knights almost anonymous. Many names and bits of information about their lives, however, are preserved in local documentary records. Those of central France, which supplied the single largest contingent of Crusaders, have been the subject of the study by Georges Duby mentioned in the second chapter. Duby’s research, mainly in the records of the great abbey of Cluny, provides information about some of the men who fought in the First Crusade: their numbers, place in the social scale, marriage and inheritance customs, feudal relationships and obligations, and way of life. From other sources, information can be gleaned about their training, armor and weapons, and how they supported themselves. Among the knights described by Duby are the Le Hongre brothers, whose family lands lay west of Tournus, and who were vassals of the Gros family, lords of the neighboring castle of Uxelles.

In many ways the Hongres were typical of the contemporary knightly family. Of five sons, two had become monks, two responded to the preaching of the Crusade and went off to the Holy Land, never to return, the fifth, Humbert, became sole heir of the family estate.
6
Behind the varying fates of the Le Hongre men lay the series of gradual but drastic social, economic, and legal transformations in the situation of knights that had taken place in the course of the eleventh century, by more than coincidence in time for the Crusade.

On the one hand, as a result of the Peace of God movement and the Christianizing of knighthood, the title of knight had acquired a prestige that made even great lords proud to assume it, a prestige that gave a new cohesion to the two-tiered upper class. The lords, or castellans, a very small group of families of ancient wealth and nobility, exercised independent control over large districts, with the power to command and punish, tax, try, and exact military service. The knights were small landholders, subject to vassal obligations but exempt from the castellans’ other powers, and with powers of their own within their restricted territories. Simple knights might marry the daughters or sisters of castellans; castellans chose their own and their sons’ wives from their own rank. Nevertheless, the two groups felt a powerful class solidarity as members of the military elite, segregated from the rest of the population by their profession of arms and united by the ceremony of knighting and the title of knight.

But at the very time they were rising in the social scale, the knights were undergoing a catastrophic economic squeeze which brought about changes in family structure and inheritance customs that in turn profoundly affected the institution of knighthood. The ancient custom of dividing the inheritance equally among sons and daughters had diminished land holdings to the point where many heirs were reduced to poverty and peasant status.
7
A general European agricultural crisis around the year 1000 may have aggravated the problem.
8
The mechanism by which the historic change was brought about is not known, but by the end of the eleventh century the system of partition of estates had been supplanted nearly everywhere by that of undivided inheritance.
9

In many areas this took the form of primogeniture, inheritance by the eldest son. In the region where the Hongres lived, the commonest form was the
frérèche
or
fraternitas
(brotherhood), in which the estate was owned intact by all the male relatives but administered by a single heir (not necessarily the eldest).
10
In either form of undivided inheritance, marriage and the founding of a household was limited to one or at most two sons. Where primogeniture was the rule, younger sons had to leave home to find a livelihood either in the Church or by the sword. In the area where the Hongres lived, they might remain at home but were subject to the supervision of the head of the family, who alone became truly an adult
(senior)
. The younger sons were perpetual “bachelors,” “youths”
(juvenes)
, and they had to leave home, if not to seek a livelihood, at least to seek fortune and freedom.

In the early eleventh century, knighthood still constituted an open class. Anyone could belong who could afford a warhorse, armor, equipment, and peasants to work his lands in his absence. But the caste was scarcely threatened from below. The great medieval commercial revival, though already under way, had as yet enriched few merchants or peasants. On the contrary, in at least some areas, the knightly class was subject to losses, as impoverished members could no longer afford to equip themselves. In the first decades of the eleventh century, Duby found, the number of knights in the Mâcon region declined. One district, Merzé, had seven knights in the year 1000; one died without heirs, and two did not leave sufficient inheritance for their sons to maintain the rank; by the time of the First Crusade, descendants of these two knights were peasants, serving as stewards for a castellan who held land in their village. Only four knightly families were left, and no new ones rose from the peasantry or the bourgeoisie to replace those that had been lost.
11 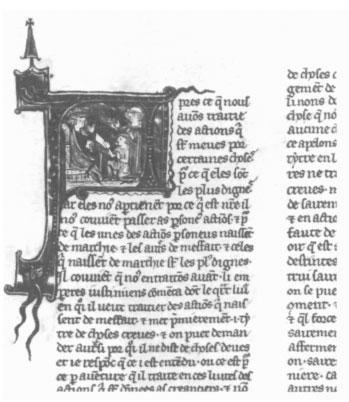 This demographic erosion of the knightly class, which in some regions actually threatened it with extinction, was counteracted in the course of the century by certain other changes. The knights’ financial basis was strengthened by the general economic upturn and the new family customs with respect to succession. The title
miles
became more widely applied and was now attached to a surname, usually the name of the principal family estate. As family solidarity strengthened and individualistic ownership declined, knightly status began to be regarded as hereditary. After 1050 knighthood was commonly handed down from father to son; what had been a rank became a hereditary caste, closed to new members and locking in the old ones. In short, it became an “order,” whose qualifications for membership were those of birth; neither peasant nor merchant could gain entrance, no matter how rich they might be.
12