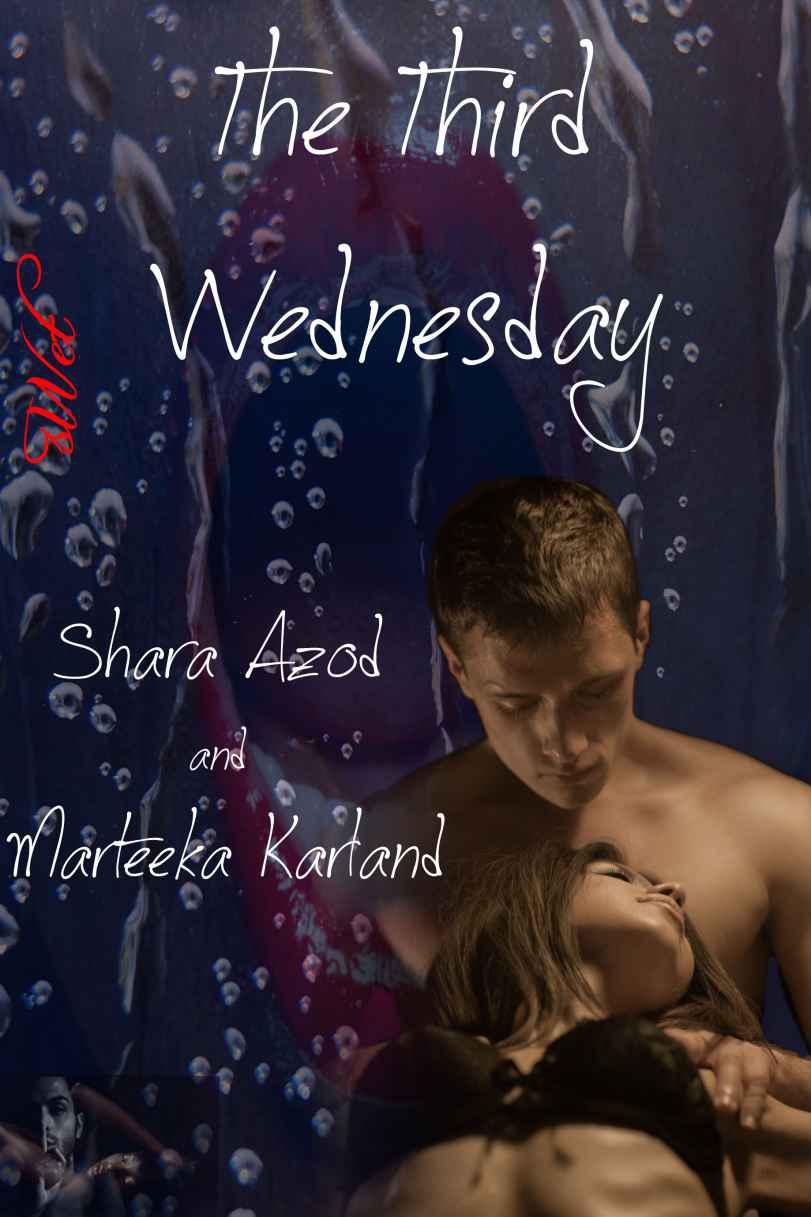 Books are NOT transferable. Re-selling, sharing or giving eBooks is a copyright infringement.

Four meetings, two negotiations and one mediation was not bad for a day’s work. Tonisha settled into the high-backed leather chair for the first time in a very long, very busy day. Sighing, she flipped through the custom-made, leather-bound planner that had her name embossed in gold on the cover. Of course she could’ve started her computer and synced her smartphone, but sometimes she just preferred the texture of paper and pen. Touch. It made her feel like less of the automaton she was becoming.

A smile graced her lips as she confirmed what her body was already telling her. Today was the second Wednesday of the month. It was the one day of the month she would be able to completely relax and let go of the hectic hustle and bustle that was the one constant in her everyday life. Tonisha’s career as a high-powered corporate attorney took up all her time, leaving nothing for relationships beyond the job, intimate or otherwise. If she wasn’t flying to every corner of the globe, she was negotiating contracts, mediating, advising, or holding the hands of dumb-fuck CEOs and CFOs who deserved to go hang for their stupidity. She’d clawed, sweated and bled her way to the top of her game, and in return she’d sacrificed a marriage along with more relationships than she cared to count.

In the end, she had earned her kick-ass penthouse, a vacation house in the Bahamas she had only used to schmooze clients and her multi-million dollar salary. To her, it had been worth the sacrifice. Still, there was something elemental missing. A connection that could not be faked. All the people who moved in her circles were looking to make up that lack of true personal contact. Some joined exclusive BDSM clubs and paid for the privilege to give up complete control to someone who didn’t give a damn they ran a Fortune 500 company or were in charge of more people than the population of some small countries. Others had mistresses (or whatever the hell the male version was.) Perhaps, in a way, paying for it was easier than letting someone in naturally. Even if the payee didn’t get it, or didn’t accept it, they had an incentive to pretend. Or maybe the person getting paid was just as removed, with a closet full of frustrations, needing something just as much as the person paying.

Tonisha didn’t know or really care. In her mind, she wasn’t paying for intimacy. It was a wonderful byproduct of letting go. After all, it had started out as just a massage at Body Electric, the private spa at which she was a VIP member. Of course, she visited the spa regularly--once a week. But the third Wednesday--that was her personal appointed with Eduardo, the owner and operator who was only in Atlanta once a month. Today she would get much more than waxed, primped and massaged. Today she would get the total package.

It had started a year ago today, when her regular masseuse had been out for the day...

“I apologize, Ms. Cauldwell.” Eduardo smiled, and his green eyes had twinkled as his gaze swept her from head to toe. “Lisa had a family emergency. I will be giving you your massage today, if I may?”

Tonisha shivered. There was something in the way he’d looked at her that promised much more than just a massage at the end of her beauty regime. A warning sounded in the back of her mind, but she found herself agreeing instead of simply rescheduling her massage. “I’m sure that will be fine,” she heard herself say.

The staff should have said something before she went through her entire ritual; frosting her hair, then a manicure and pedicure, a facial, body wrap...then came the massage as the cherry on top. Once a week, every week, this was her escape. How was she supposed to relax when this enigmatic man had her tensed tighter than she’d been when she walked in?

Eduardo left the room for her to undress, and she had a moment to appreciate the view. The man was seriously fine. South American of some sort, with just a slight accent. His shoulders and arms looked like they might have been made from rock rather than sinew and bone. Her ritual weekly massage was more about relaxing than dirty little fantasies, but she'd been so wound up, she needed the relief. Eduardo was something to look at in his perfectly fitting white pants with the pale blue, short-sleeved shirt. He wasn't overly muscular, but lean with defined arms. She caught glimpses of his chest and abdomen through the shirt when he moved.

Maybe this wasn't such a good idea. Moisture had pooled in her pussy, threatening to leak out. She so didn’t need that during a massage. No way he wouldn’t notice.

When he shut the door, she sighed in defeat. Might as well. Walking out now would just look bad. Really, she needed the release.

Once undressed, she lay on the table, face up with the sheet covering her breasts. Crossing her arms over her chest, she chewed at her bottom lip a little self-consciously. It was disconcerting to think of herself lying there so vulnerable to a man. Sex was one thing, but this ritual exposed her in a way that could be considered more intimate than sex. All her imperfections were on display. Lisa knew all the places kinks and knots cropped up without asking. Because they had been together for so long, Lisa also knew not to say anything during the massage, but to let the soft music and aromatherapy candles do their work to relax her. The masseuse’s hands had always worked methodically, impersonally working out all the anxiety Tonisha held in. Lisa knew her quirks and indulged her.

God, she sounded like a spoiled brat. But she deserved it, dammit! This was one of the perks that came from her hard work--why shouldn’t she indulge? No. This wasn't a good idea. No matter how good Eduardo might be, he couldn't know all her preferences. And he was a man. Would she be able to look past that when he had those very large, capable-looking hands all over her?

Then soft music drifted around the room, the increase in volume gradual so as not to jar the auditory senses. It was a soothing blend of tenor flute and strings. Ocean waves rolled lightly in the background, creating the perfect counterpoint to the music. Okay, so he hit that one right. She'd give it a few minutes. If anything wasn't to her liking, she’d call an end to it.

There was a soft knock, and the door opened slowly and clicked shut, and Eduardo moved quietly around the dimly lit room. Seconds later, she realized he was lighting candles in various small alcoves. Before he'd finished, the soft aroma of lavender and jasmine reached her. Some of the tension left her body. For the first time since she’d realized her monthly ritual was in jeopardy, she relaxed. Maybe all wasn't lost, after all.

Eduardo didn't say anything, though she kind of wished he would. Not only did she really like his voice, but she almost wanted a reason to end this before it got started. There was a nagging feeling in the back of her mind that said this wasn't a good idea. Not in a bad way, but in a way that said it might be far better than she was expecting.

Uncovering her feet, he used a warm, moist towel to refresh her, beginning the process of complete relaxation. The soft, terrycloth towel abraded her feet gently, more soothing than rough. He used the perfect amount of pressure, squeezing her toes, moving the cloth gently over the tops and bottoms of her feet several times until the towel cooled. Then he covered one foot and started the slow, almost laborious process of working out the tension in one foot and lower leg.

Tonisha had always enjoyed this part of her massage more than just about any other part. There was something so soothing about it. When Lisa finished with both feet, the tension in her whole body was significantly less. Logically, she knew the feet had nerves that connected to the whole body, but it just amazed her how good it felt. After a few moments with Eduardo's magic hands and fingers stroking her foot, she realized this man definitely knew what he was doing.

Unable to suppress a groan as he worked out a particularly sore spot just above her heel in the fleshy part of the underside of her foot, she felt herself melting. He didn't seem to have any trouble finding her buttons and pushing them with every sensual slide of his fingers. All the tension she had been holding inside started the slow slide out of her system, just as it had when Lisa massaged her. Only this time, behind the initial release was a nagging, growing need for something else.

Ignoring it as best she could, she tried valiantly to empty her mind as those wonderfully talented hands started to work their way up her calves. His hands worked the muscles deep, then soothed the aches and pains away. Tonisha breathed in deeply, allowing the sure pressure of his moves to take her away from her hectic life to a zone of pure pleasure. His hands were so much stronger than Lisa’s. She could sense him holding back as if he were afraid to hurt her, careful not to use too much pressure. Yet there was a command in his touch, one that made her open her legs without hesitation as he moved up to her thighs.

No longer breathing deeply, Tonisha was hyper-aware of where Eduardo’s hands lingered, kneading before soothing. There was no keeping back the desire that made her moisten liberally. Not once did he touch her inappropriately, coming nowhere near her center. But she found herself wishing he would. Like an itch that demanded to be scratched, the ache inside her grew by the second, leaving her panting with a need blossoming from a place so deep and real it refused to be denied. She wanted to cry out, to beg him to just move his hands and touch her there, just a little. Only that would make her every bit a skeevy as those pathetic men who visited cheap massage parlors to get someone to jerk them off.