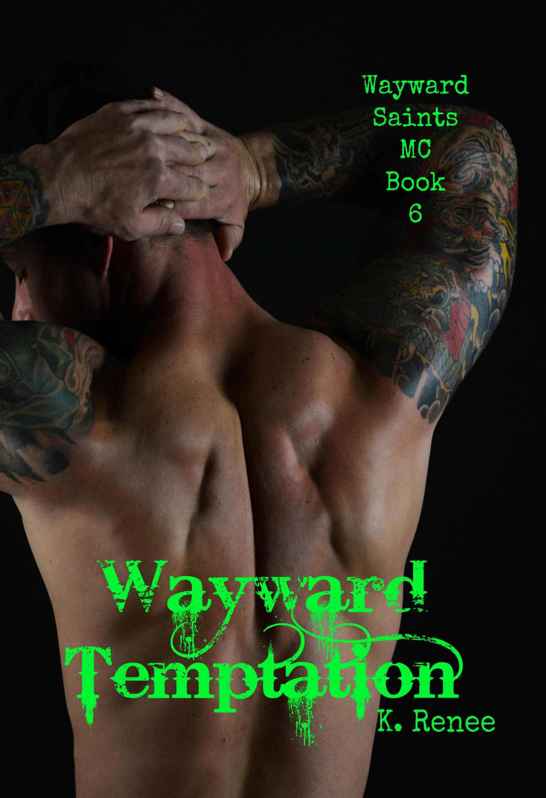 A big thank you for suggesting the tree scene ;)

This book is licensed for your personal enjoyment only. It may not be re-sold or given away to other people. If you would like to share this book with another person, please purchase an additional copy for each person. If you are reading this book and did not purchase it, or it was not purchased for your use only, you should return it to the seller and purchase your own copy. Thank you for respecting the author’s work.

Running. That’s all I’ve really known my whole adult life. Butch and I didn’t grow up in the perfect family, but we were loved. Our mom did the best she could, and when times got hard, we had to help out. Not that I’m complaining because I wouldn’t trade it for the world.

Ever since Butch joined the Wayward Saints, things got a little easier for us. Mom was finally able to stop working three jobs to make ends meet, and she was able to focus more on herself.

Down the road, I’ve made some mistakes that I regret, and I wish I would have listened when Butch told me that Marco was bad news. But of course, I didn’t. Instead, I learned the hard way.

By the time I finally left, Marco Cabrera wasn’t the man I first fell for. Over the last few months, he got involved in the mob, and when I tried to get out, it was already too late. He thought he owned me, and in turn, thought he could do whatever he pleased to me.

Little did he know that I was about to take a stand, and fight for my freedom. I wouldn’t just let them do as they pleased, and I sure as hell wasn’t going to lie down while they sold me to some man because he had some money.

Walking into the clubhouse, I never thought that I would be bringing trouble to my brother’s front step. Part of me feels like I have nowhere else to run. Looking around the room, I see a bunch of the brothers that I’ve only met a handful of times. Once their attention is on me, I feel like I’m suffocating.

Getting ready to run the other way, I feel a hand on my arm. When I turn around, I see his face, and part of me sags in relief. He will protect me. I know he will. He always promised that if I ever needed anything, he would take care of it.

“Sailor, what are you doing here?” Butch asks. I look around the room once more. I see that everyone is quiet, and still staring right at me. I would do anything to get out of their sight, but I know that it’s not safe outside of these walls.

Taking a deep breath, I decide on telling my brother the truth. If anyone can get me out of this mess, he can. He may hate me for it, but I never meant to get involved with these people. I left Marco because he was getting into some shady stuff that I wanted nothing to do with.

“Marco sold me.” The words stumble out of my mouth, and hearing the words for the first time shocks me just as much as they do him.

“What the fuck do you mean Marco sold you?” he questions. The grip he has on my arm tightens, and he drags me down a hallway that I can only assume leads to his room. When we make it through the door, he sits me down on the bed, and forces me to tell him the whole story.

“For weeks I’ve been trying to get away from Marco. About a year ago he started to hang with some shady people, and I broke up with him. For the last few months he’s been still coming around my apartment, and telling me that we are not over. He isn’t taking no for an answer. Last night he came by again and told me that I needed to grab my clothes. He said that someone would be by in the morning to meet us. He spent the night, and I might have dosed his whiskey with some sleeping pills. Instead of doing what he said, I threw some clothes in a bag, and came here before he could wake up,” I blow out a breath, and he runs his hands over his face. It might not be the exact truth, but I don't think he can deal with the real truth.

“Please Butch, you have to help me. I found the messages on his phone, and they were agreeing on a price for me. He sold me to some asshole for ten thousand dollars. I don’t know what to do, and I can’t go home now.” I can feel myself start to tear up. I know that if he doesn’t help me, I won’t survive this.

“Do you know who he sold you to?” I shake my head no, and he takes a seat next to me on the bed. He wraps his arm around me, and I can feel my body start to go off of alert. For hours all I have been doing is looking over my shoulder. I want so bad to just curl up in a ball and cry until I wake up from this bad dream, but it’s not going away.

There’s a knock at the door, and when Butch goes to answer it, I don’t expect the man who’s standing there. I’ve known Striker for as long as I can remember. He’s been Butch’s best friend for years, and he’s like the second brother that I never wanted.

When I see him, I run to him, and he wraps his arms around me. “You okay?” he whispers against my hair. I nod my head, and bury my face into his neck. Striker and I had a small thing a few years back, but it never amounted into more than just friends.

I hear my brother mutter under his breath, and Striker pulls away from me, and asks what his problem.

“That dickhead she was dating sold her. Shit’s not okay,” he grounds out.

When Striker’s eyes meet mine, I can’t help but look to the ground. I can see the disappointment in his eyes, and when he forces me to look at him. I see the hurt in them as well.

The tears start to fall from my eyes, and down my cheeks. “I’m sorry,” I choke out. “I never thought that he would do something like this to me. Striker please, I need you guys to help me. I don’t know what to do,” I start to sob. He pulls me into his arms, and for the first time in months, I feel like someone cares enough about me to make sure nothing happens to me.

A Boss to Love and Hate by Peters, Norah C.
Honor and Betrayal : The Untold Story of the Navy Seals Who Captured the "Butcher of Fallujah"-and the Shameful Ordeal They Later Endured (9780306823091) by Robinson, Patrick
You Know Who Killed Me by Loren D. Estleman
Paula Spencer by Roddy Doyle
Crossing Borders by Z. A. Maxfield
The Girls by Lisa Jewell
Scarlett Epstein Hates It Here by Anna Breslaw
The Flawed Mistress (The Summerville Journals) by Brazear, Margaret
Birthday Challenge (Weekend Getaways) by Littlejohn, Dana
Arundel by Kenneth Roberts