“What about your heart?” Steve pressed two fingers to the spot where it beat against her flesh. “Am I in there too? Because you’re in mine, and I don’t want to get strung along only to get my heart broken later because you’re not serious about this.”

Pam smiled at how he’d mirrored her earlier words. She knew by the quiet way he spoke that he wasn’t making a flippant joke. He was in this with her, as scared and excited and overwhelmed as she was. They would be all right, as long as they were honest with each other and kept their eyes wide open. She had to trust that.

She
did
trust it. She trusted Steve, and she trusted herself to handle whatever was to come. “Yes, Steve Waller,” she admitted. “You’ve definitely carved yourself a spot in my heart.”

“Woot!” Steve leaned back and punched the air in a gesture of triumph. “She loves me!”

But Steve wasn’t listening. Neither were the fifteen or so students, three teachers and two firefighters, who were standing outside the classroom with their faces pressed to the windows. At Steve’s proclamation, the group let out a rousing cheer. Erica beamed at Pam through the glass, giving her a thumbs-up signal. Rob sent her a knowing smile and a wink. The students alternated between doing exaggerated kissing impressions and making vomiting sounds.

Pam laughed, her face flushed but her heart light. Steve picked her up and spun her around, planting kisses all over her face and down her neck, until it got to a point where Pam figured they had to stop before the students got a lesson in sex education their parents would write letters of complaint about.

“Put me down, you fool.” Pam giggled. “There will be time for all this later.”

“Why don’t you come over to my place tonight and find out?”

“Tonight?” Steve set her on her feet and grinned. “You move fast. Is my virtue in danger?”

“Very much so.” Pam cocked a brow. “Think you can handle it?”

Steve’s smile widened. The way his gaze tracked over her face, settling at last on her mouth, set every sense in Pam’s body tingling. And his words were like music to her heart, a heart that had waited so long to whistle this particular tune. A tune of happiness and hope.

“I can handle all of it, sweetheart,” he pledged. “Everything you’ve got.”

If you enjoyed Burning Up, you might be interested in Erica’s Choice, a hot MMF ménage romance that follows Corey, Griff and Erica’s journey over rough terrain toward their happy ever after.

You might also be curious to find out what happens to Rob McConnell. Will he get his own happy ever after? Check out Giving off Sparks to find out! Keep reading for an excerpt.

Two things woke Rob McConnell at 3:46 in the morning. The sound of a woman screaming and the acrid smell of smoke.

He shot out of bed, his firefighter instincts on full alert. Yesterday, he’d spent the better part of a ten-hour shift working with his crew and several others to dampen a factory fire before it spread to the surrounding industrial area. They’d managed to douse the flames without any loss of life, but they weren’t always so lucky. Screaming and smoke tended to make Rob spring right into action.

He was yanking on a pair of jeans in two seconds, bolting out of his bedroom in three. He stopped in the darkened hall, listening for the roar of flames. It took him a moment to realize there was no roar, and that the woman’s screams weren’t the come-and-save-me-I’m-burning-to-death kind. They were more of the Oh-God-baby-yes-I’m coming-I’m-coming variety.

Rob groaned and rubbed at his eyes with the heels of his hands. His housemates were at it again. Blair Bowman and Leo Chatfield—otherwise known at the fire station as Blue and Chats—were working their way through all the women in Ashton Heights and a few surrounding suburbs who were willing to take both of them on at the same time. Unfortunately, there were a lot of women to choose from.

Ordinarily, Rob wouldn’t care what his two workmates did in the bedroom. He wasn’t a complete stranger to the delights of three-way action himself. But the walls in the old Queenslander the three of them shared were paper thin. The noise was affecting his sleep.

Pushing out a sigh, Rob walked into the kitchen to grab the milk from the fridge. Just as he was about to lift the carton to his lips, he detected that scent of smoke again. The screams might have been nothing to worry about, but that persistent smell was a concern. He followed it to the open kitchen window, which faced the kitchen window of the neighboring house. Through the glass, he saw a telltale orange glow emanating from inside.

Rob dropped the milk carton, spilling the contents all over the linoleum floor. Ignoring the mess, he yanked the fire extinguisher off its wall bracket and bolted toward the sliding glass door that led to the back patio. He ran down the stairs three at a time, vaulted over the fence between the two properties and leapt up the back stairs of number nineteen. He banged on the glass of the house’s back door, trying to rouse the single mother and three kids who lived inside.

Through the glass, Rob could see the fire had already consumed the toaster on the bench. As he watched and banged furiously on the door, the flames leapt from the toaster to a nearby tea towel and set it alight.

Where the hell were their smoke alarms?
Fuck it,
he thought. He couldn’t wait for Cheryl to wake up. He lifted the fire extinguisher and rammed the base of it into the door. A crack appeared in the glass immediately. With only one more blow, the whole sheet exploded. Glass fell everywhere, leaving shards on the inside and outside of the house.

A woman screamed, the sound ear-splitting. Rob didn’t even look at her as he leapt over the broken glass and headed for the kitchen. He lifted the fire extinguisher and released the safety switch. Rob gave it a few good long bursts, spraying at the flames until he’d buried the small blaze in white foam.

When the noise of the extinguisher died down, silence fell. Outside, a dog barked. A few screen doors creaked as they opened. The commotion had obviously gotten the attention of the neighbors. Rob’s heart rate began to calm as the adrenaline eased out of his system.

It sped up again at the sound of one shrill question. “Why in the world did you do that?”

Rob’s head whipped around and he got his first real look at the woman who’d screamed earlier. A woman who was definitely not Cheryl, the forty-something mother of three who lived at number nineteen. This woman was not forty, probably wouldn’t be for at least fifteen years. And if her hips had born any children, they sure didn’t show a sign of it. She was trim and slender with long hair that fell in straight dark strands all the way to her tiny waist. Which wasn’t far because she was short.

She was short, cute and really ticked off. Which ticked Rob off. Fortunately, his annoyance distracted him from the other things he was feeling. His first glimpse of the woman had knocked the breath from him and he felt like he’d been sucker punched.

He turned around fully to face her. She’d put on the hall light at some point, and the illumination glanced off the shiny strands of her dark hair, creating a halo effect that was in direct contrast to the thunderous look on her face. Rob shook his head, as though that would help him make sense of her question. “Are you asking why I put out your fire?”

“No, I can see the logic in you putting out the fire. There were flames. And smoke. I’m glad the flames and the smoke are gone.” She gestured to the shattered glass all over the floor and the gaping hole where the back door used to be. “But why did you have to break the door, for Pete’s sake?”

“The fire was spreading fast,” Rob explained. “Would you rather I’d let it burn down the kitchen?”

“I
did
knock.” Rob heard the exasperation creeping into his voice. “There was no answer. None of this would have been necessary if you had smoke alarms.”

“I do have smoke alarms. I mean, Cheryl does. I think. I’m just the house-sitter.” The petite brunette directed her gaze toward the ceiling, her brow furrowed. “What about that?”

Rob followed the line of her gaze toward the roof. There was an alarm fitted half way between the kitchen and the living room, but it was an old model and the red sensor light wasn’t on. “It obviously doesn’t work.”

“A house can go up in a matter of minutes. If you’re asleep when a fire breaks out, the smoke could kill you before you’re even aware of the flames.”

“Or it could attract the attention of strange men in the area, who might break down your doors in their efforts to be heroic,” she drawled.

Rob turned back to face her. “I wasn’t trying to be heroic. I was trying to save Cheryl and the kids.”

“Ah. So if you’d known it was only me here, you wouldn’t have bothered?”

Stunned, Rob opened his mouth to refute the suggestion. The words died in his throat when he saw the glimmer of amusement in the woman’s eyes. They were hazel, more on the green side than the brown, and there was a playfulness in them that made Rob’s skin—and other parts of his anatomy—tingle.

That feeling of being sucker punched returned. Oxygen seemed pretty hard to come by all of a sudden. He wanted to answer
I’d break down a hundred doors to save
you
,
but he was too winded to speak.

His sense of being off-kilter only got worse when she smiled, a simple curve of her lips that was as devilish as it was cute.
Whoa. Forget sucker punched. I think I’m being waterboarded.
Although if he could do things over he wouldn’t alter his actions in the slightest, Rob found himself blurting. “I’m sorry about your door.”

“I’m sorry I yelled at you about the door,” she countered, her smile turning chagrinned. “I don’t do well when woken suddenly.

Rob returned her smile, feeling more than a little giddy. “I can understand that.”

“I was fast asleep, so if you hadn’t come along, things could have been a lot worse. What I should have said first up is thank you.”

Rob lifted a shoulder, a no-big-deal gesture. His face felt hot. Shit. Was he blushing? “It’s cool. I live next door, by the way. My name’s Rob. Robert, but it’s just Rob. McConnell. Rob McConnell.”

Oh my freaking God, man, buy a vowel why don’t you?

She stuck out her hand. Rob enveloped it in his and an electric current strong enough to spark another fire passed from her flesh to his. Holy Guacamole. Where had Sierra been all his life? 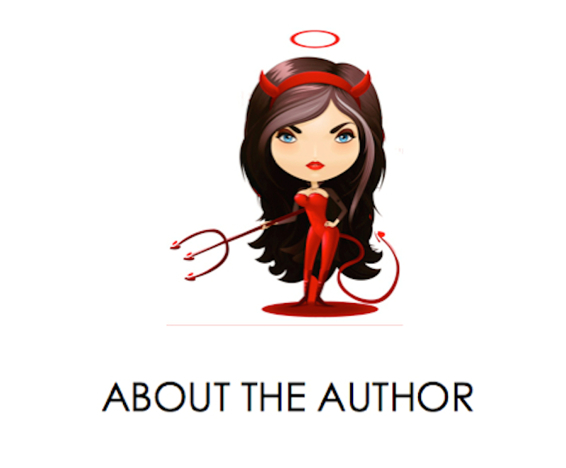 Despite falling in love with creative writing in her teenage years, Sami worked a wide variety of jobs on her way to eventual publication. As a bartender she used to scrawl snatches of dialogue on the back of flyers advertising $2 drink specials. Now she types on a computer like a bonafide, professional author—but she wouldn’t mind finding a bar that still sells $2 drinks. If you know of one, please email her at
[email protected]
or contact her on
Twitter
or
Facebook
.