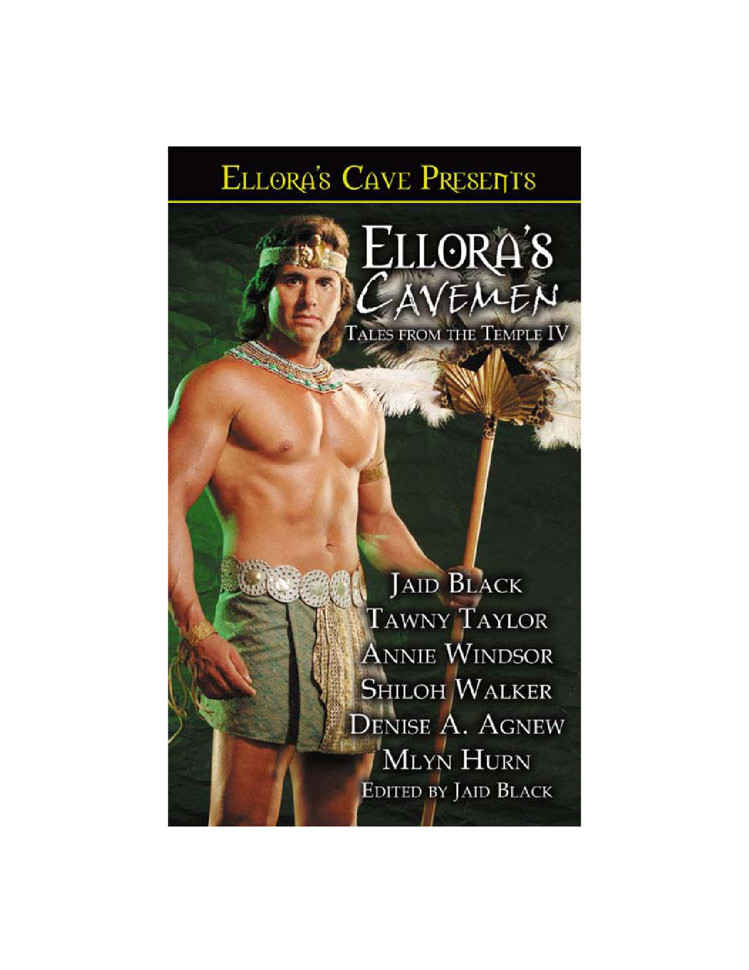 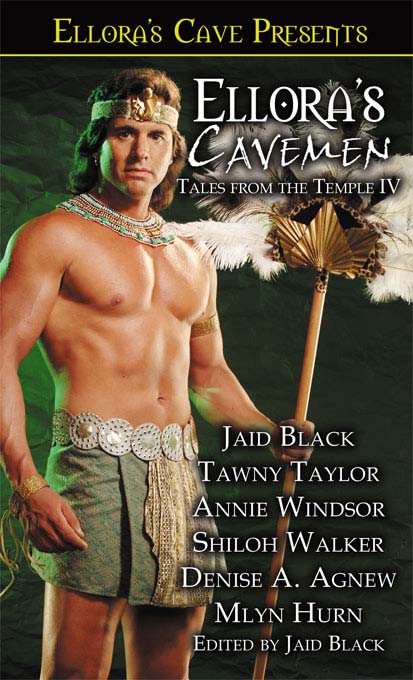 ALL RIGHTS RESERVED. This book may not be reproduced in whole or in part without permission.

This book is a work of fiction and any resemblance to persons, living or dead, or places, events or locales is purely coincidental. They are productions of the authors’ imagination and used fictitiously.

ELLORA’S CAVEMEN: TALES FROM THE TEMPLE IV edited by The Legendary “Queen of Steam”
Jaid Black.

Tales From the Temple IV
has been rated E–rotic by a minimum of three independent reviewers.

E-
rotic
love scenes are explicit, leave nothing to the imagination, and are high in volume per the overall word count. In addition, some E-rated titles might contain fantasy material that some readers find objectionable, such as bondage, submission, same sex encounters, forced seductions, and so forth. E-rated titles are the most graphic titles we carry; it is common, for instance, for an author to use words such as

“fucking”, “cock”, “pussy”, and such within their work of literature.

X-
treme
titles differ from E-rated titles only in plot premise and storyline execution. Unlike E-rated titles, stories designated with the letter X tend to contain controversial subject matter not for the faint of heart.

TALES FROM THE TEMPLE IV

By Denise A. Agnew

Ghost of a Chance

Evelyn Layne heard a faint noise coming from the corridor outside the office and stopped typing.

At first she couldn’t be sure she’d heard anything. Considering the weird stories going on around SIA about a haunting, it would be easy to accumulate a case of the creeps.

“I don’t believe in ghosts,” she whispered to the empty office.

Well, okay, she did believe in ghosts, but that didn’t mean SIA was haunted. No, the rumors flying around the watercooler resulted from people spending too much time in front of computers and not enough downtime.

With a sniff of disdain for any goblins lurking around the big building, she continued her work. Friday night had come, but since she didn’t have plans, she might as well stay.

Clacking away in order to finish her report for Section Chief Mac Tudor, she realized her neck and back felt stiff. After Mac’s last assignment battling the man-eating genetic mutants in the Colorado mountains, he’d received a raise and promotion. While she adored Mac, she couldn’t say the increased duties she’d experienced as a result of his promotion pleased her.

Neither did the fact he’d found the love of his life in Cora Destiny Tremayne, a talented, beautiful agent that had assisted him with the
Maneater
case. Not that Evelyn ever believed she had a chance with Mac, but a woman could dream.

She sighed and stopped typing. The little cursor on the screen blinked madly and drove her to within an inch of screaming. Her eyes itched and her stomach growled.

She glanced at the bland black and white office clock above the file cabinets.

She groaned. Life had gotten too damn mundane. Or as her English friends would say,
bloody-assed boring
.

Disgusted, she muttered to the empty office, “Okay, enough pity party. Get over it.”

Several minutes passed before lightning flashed across the sky and a distant rumble of thunder interrupted her. Grumbling, she backed up her documents just in case and started to shut down the computer.

She wondered if the new Special Agent, Conall Tierney, would prowl the halls tonight. Mixed pleasure and wariness entered her thoughts. The few times she’d met Conall qualified as way off the charts interesting.

Try mind-blowing, irritating, and uncomfortably arousing.
Her body reacted as she thought about the exciting agent. Heat curled through Evelyn’s stomach, a sweet, annoying arousal reminding her that she had ignored her female needs for too long.

The first time she’d spied the tall agent, every gonad in her body had taken full notice. His collar-length wavy hair tossed about his head in unmanageable strands, and she’d caught a flash of his deep-set eyes. Cut in a rugged, handsome line, his jaw spoke of stubbornness. His patrician nose fit his face, not too big or too small.

He’d caught her gaze with his for one startling, intense moment. Deep, emerald green with a hint of the sea, his eyes commanded attention. Then his crusty exterior had melted, replaced by the most stunning, unbelievably gorgeous smile she’d ever seen.

Before she could do more than gape at him, he’d followed Mac into his office.

Evelyn thought back to their last encounter. Conall had walked in about a week ago around six o’clock in the evening. Before she could turn toward him, he planted both hands on her desk and glared at her like she’d committed a crime. His musk and sandalwood scent stirred her senses and she took a deep breath of the pleasant combination. Too bad his attitude didn’t match his delicious cologne.

“I need to see Mac.” His voice, laced with velvet richness, held a husky timbre that spelled hot days and steamier nights. “Now.”

Thrown off by his briskness, she frowned and swiveled her chair toward him.

Bristling, she kept her voice steady. “He has an appointment with him right now.”

He leaned in closer, his presence intimidating and his mere size reason to give a person pause. Something earthy, mysterious, and powerful radiated from him that didn’t seem ordinary. “Break in on the appointment and tell him I’m here.”

Annoyed, she stood and faced him, despite her discomfort with making a scene. “I can’t break in to his meeting. He asked me to hold all calls and visitors.” A strange light flashed through his eyes, yellow as a monster in a horror flick, then he blinked and it disappeared. Shaken and not sure what she’d seen, she said, “If you want to leave a message, I’m sure he’ll call you.”

Reluctant admiration mixed with continued urgency in his eyes. He wore dark gray dress slacks and a pressed white long-sleeved oxford shirt without a tie. He might look tailored, but the potency in his stare, his sheer masculinity, ignored the mundane.

Instead, he looked like a gladiator ready to take on an opponent.

One corner of his finely carved mouth turned upward. As he watched her the tension rose, the spark and pop in her veins making her more aware of him as a virile, intriguing man. As his gaze locked with hers, a strange lethargy built inside her. She 7

should
be flaming angry with him, but unprecedented desire slowly eroded the irritation.

“What can I do to convince you this is important enough to interrupt?” he asked.

She moved around the desk and stood in front of Mac’s door to illustrate her firmness on the subject. Just because this man defined sex on two legs didn’t mean she couldn’t handle him.

She plastered on a smile. “Maybe if you told me the problem, I could help you solve it.”

His return grin held sarcasm. “I doubt it. You wouldn’t believe what I have to say.”

Again he came closer. With her two-inch heels she stood five-nine, but this man towered over her. “Are you sure you want me to
try
you?”

His statement made her blink. “Was that supposed to be a double entendre?”

Without losing a beat, he said, “Yes.”

Okay, what do I say to that?

Evelyn knew he wouldn’t back down, at least not if she allowed him to intimidate with his barely veiled allusions. “I have clearance. Remember, I type Mac’s correspondence and documents.”

His fists clenched at his sides, and growing exasperation grew along with his dark frown. Narrowed and turning more molten by the second, his eyes held desperation.

Perhaps he thought friendliness would get him in to see Mac. Little did he know.

“The Section Chief will be available in the morning at eight o’clock if you want to make an appointment to see him then,” she said.

She started to move away from his disturbing closeness when he put a hand down near her head, palm flat on the door. Inhaling his wonderful, heady masculine scent, she felt enveloped in corporeal heat. A strange dreaminess came over her. Her mind skittered around looking for an explanation for why she felt so languorous and couldn’t resurrect a single excuse other than finding this man way too stimulating.

Right then the door snapped open and she started to tumble backwards. A tiny squeak of surprise left her throat. Conall grabbed her by the shoulders and tugged her toward him. His impersonal grip moved her aside and Mac strode through the door with his appointment in tow.

Needless to say, Conall
did
get to see Mac that evening. That night she’d dreamed of Conall’s hands warming her arms, sliding into her hair, touching her breasts, her nipples, her clit. The rest of this week, though she hadn’t seen him once, she’d fantasized about what could happen if she ran into him again. The man might be a pain in the ass, but her libido made her wonder what it would be like to have sex with him.

Returning to the present, Evelyn sighed. She needed to ignore her weird obsession with Conall and remember her goal.

She wanted to
be
an agent, not fuck an agent.

Since she’d started concentrating on her goals by picturing them, plus taking concrete steps such as physical fitness and completing her Bachelor’s in criminology last month, good things began happening for her. Mac had said he’d write her a recommendation if she applied for a special agent position in the next round of applications. Still, selection of agents didn’t come easy. SIA could turn her down.

An odd screech, almost like a bat, echoed in the hall. Fear born of uncertainty rolled up her spine and started goose bumps along her skin.

Thunder rumbled and rain splattered hard against the windows. She decided she’d challenge whoever or whatever prowled the halls. She went around her desk and headed toward the closed office door. Pausing, she reconnoitered for weapon possibilities and located her oversized stapler. Hefting the stapler in her right hand, she opened the door and peered into the corridor. With caution she looked right, then left.

Nothing but empty space.

Another high-pitched screech came from somewhere in the building. Her skin prickled as she cringed from the nails-over-a-blackboard sound. She paused and considered options. A night shift manned the communications complex in the center of the building, and security stayed tight at this top secret location. Someone else must have heard the noises, too. A howl came from the bowels of the building.