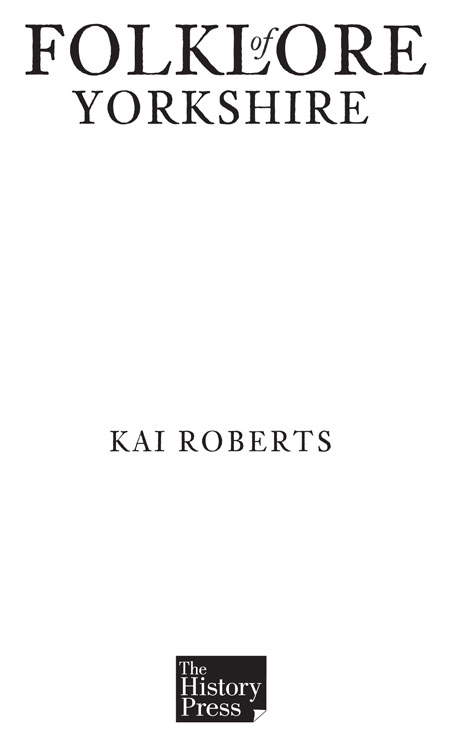 For Miss Kathryn Adelaide Wilson (of the Moors).

I
n the present day, two questions may naturally arise when a book such as this is encountered: what is ‘folklore’, and what value does it have? When the word was first coined by W.J. Thoms in 1846, the answers were relatively easy. Folklore was an attempt to record, systematise and preserve what had previously been referred to as ‘popular antiquities’ – the beliefs and practices of the ‘folk’; a poorly educated and primarily rural class whose indigenous, insular culture was perceived as threatened by the rapid advance of industrialisation and urbanisation. Such people were typically regarded as quite separate from the refined, scholarly collectors, and, as the historian E.P. Thompson so scathingly put it, ‘Folklore in England is largely a literary record of eighteenth- and nineteenth-century survivals, recorded by parsons and by genteel antiquarians regarding them across a gulf of class condescension.’

Today, with the advent of universal education, global communications, mass media and a mobile population, it is impossible to regard the ‘folk’ in such a detached, homogenous manner – if it was ever truly possible in the first place. We are all immersed in popular culture and we are all members of many social groups over the course of our lives; whether those groups be determined by generation, geography, ethnicity, occupation, religion, hobby or economic status. The boundaries are permeable, flexible and almost impossible to identify. As a result, the term ‘folklore’ increasingly looks anachronistic and yet somehow it survives; for no matter how nebulous the concept might be, it still identifies an area of knowledge worthy of study in its own right and too often overlooked by its close cousins, social history and ethnography.

The best definition of folklore we can find today comes from Jacqueline Simpson and Steve Roud: ‘It includes whatever is voluntarily and informally communicated, created or done jointly by members of a group (of any size, age, or social and educational level) … The essential criterion is the presence of a group whose joint sense of what is right and appropriate shapes the story, performance or custom – not the rules and teachings of any official body.’ The value of studying such material lies not just in preserving it but in learning to recognise what counts as folklore, because often it provides a rare insight into the hidden assumptions and unrecognised priorities of the culture that spawned it; whilst historically, it offers a valuable alternative narrative to the ‘authorised’ or ‘official’ accounts supplied by the hegemonic interests in that society.

Of course, this book does not have quite such high ambitions. In the history of folklore studies, the county folklore collection has been something of an institution. In the early days of the discipline, they provided a great deal of the material with which folklorists subsequently worked and whilst they have slowly calcified into a product primarily marketed to tourists, they remain one of the primary sources of folkloric material available to a general readership. This work undoubtedly falls into the latter category, but whilst it does not aim for originality or innovation, it will hopefully do more than merely repeat material which has been printed in such collections a hundred times before without context or analysis. Folklore is something that once possessed meaning for those who lived with it and it should not be reduced to mere whimsy or entertainment.

An entrenched problem with county folklore collections, dating back to the very first examples, has been their failure to properly consider the environment in which it was typically transmitted and the significance it was afforded by those who communicated it. Either the original collector imposed his own beliefs on the material or failed to regard it as anything more than a novelty. As Gillian Bennett complains, ‘For the most part, no great care was taken to make any sort of
sense
of these stories. They were simply “stories” and not
expected
to make sense: they were curiosities rather than realities. There was no attempt to put them in context either: we do not know when or why or how or to whom the legends were told … Such accounts do not tell us what … traditions meant to the informant: they only tell us what they meant to the collectors – which was
precisely nothing
.’

A common difficulty with such collections is that they were often rooted in the folkloric theory of the nineteenth century. Influenced by the reductive academic climate of the day, early folklorists took inspiration from the emerging theory of evolution and attempted to apply it their own material. The result was the hypothesis of ‘survivals’, which claimed that whilst human history and culture was often a progressive, dynamic process, some features remained relatively static: these remnants gradually lost their original function and significance to become ‘folklore’, preserved in debased form by the collective memory of a conservative rural working class. The early folklorists believed that by studying these relics, it was possible to reconstruct the religious belief of pre-Christian societies.

As a result of this assumption, English folklore studies developed an obsession with continuity. For something to be regarded as ‘folklore’, it was thought to have remained unchanged for countless centuries and be ‘fixed’ so that no further collection was necessary. The same old stories were reprinted again and again in folklore anthologies, under the mistaken impression that folklore never moved on; whilst commentaries on this material never considered the unique circumstances which might have produced an individual legend or custom, nor the needs they might have fulfilled. It is an error which has been repeated by county folklore collections down the ages, and although academic folklore studies have advanced considerably in the last fifty years, new ways of thinking about the subject have rarely filtered through to popular books on the subject.

The truth is, however, that even the most insular, rural populations were rarely as conservative as the early folklorists believed. New traditions often developed in response to changing populations and circumstances, and even the oldest surviving customs underwent constant revision over the centuries. Some continuity does exist, but it was a dynamic rather than a static process, and the emphasis needs to be placed on how and why such development occurs. Similarly, the turnover of some traditions is very rapid indeed and a great deal of what is popularly thought of as ‘folklore’ is merely the folklore of the nineteenth century, preserved by uncritical repetition in printed texts over the last 150 years. Much of this material has not been relevant since it was first collected and bears scant resemblance to the ‘folklore’ that circulates in modern society. Yet we are so immersed in the folklore of our own age, that often we do not even recognise it.

A truly twenty-first century ‘Folklore of Yorkshire’ would include such topics as ufology, conspiracy theories, urban legends, aliens, big cats, email rumours and more, but this is not that book. Such a project would probably take a lifetime of collection to compile and owing to the dynamic nature of the phenomena it dealt with, would be obsolete long before it was finished. This work can only ever be
A
Folklore of Yorkshire – no definitive article – and one that will primarily deal with historical material at that. But whilst it will repeat some familiar legends and hopefully bring one or two gleaned from obscure sources to a larger audience, its purpose is not just to repeat stories without any reference to their wider meaning. Instead, the material will be treated as the vehicle by which centuries of Yorkshire folk expressed their hopes, fears and beliefs in response to ever-changing and diverse circumstances – a dynamic, creative process which continues today.

How to Rescue a Dead Princess by Jeff Strand
All My Friends Are Dead by Avery Monsen, Jory John
Sullivan's Justice by Nancy Taylor Rosenberg
As Luck Would Have It by Alissa Johnson
The Simulacra by Philip K. Dick
Rain Saga by Barton, Riley
The House by the Church-Yard by Joseph Sheridan le Fanu
His Royal Pleasure by Leanne Banks
Dilke by Roy Jenkins
Solitary: A Novel by Travis Thrasher