Read Muslim Fortresses in the Levant: Between Crusaders and Mongols Online

Muslim Fortresses in the Levant: Between Crusaders and Mongols 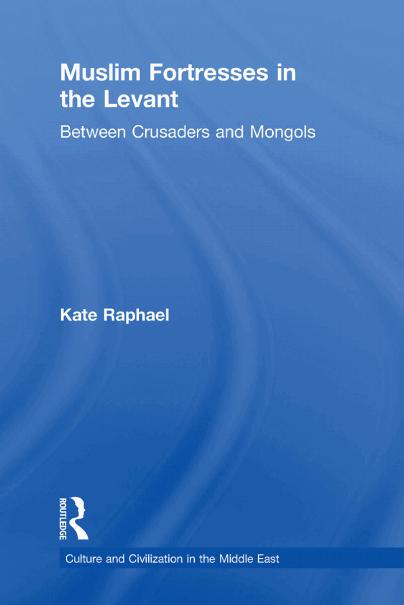 During much of the twelfth century the Crusaders dominated the military scene in the Levant. The unification of gypt and Syria by Saladin gradually changed the balance of power, which slowly begun to tilt in favor of the Muslims. This book examines the development and role of Muslim fortresses in the Levant at the time of the Crusaders and the Mongol invasion, situating the study within a broad historical, political and military context.

Exploring the unification of Egypt with a large part of Syria and its effect on the balance of power in the region, Raphael gives a historical overview of the resulting military strategies and construction of fortresses. A detailed architectural analysis is based on a survey of four Ayyubid and eight Mamluk fortresses situated in what are today the modern states of Jordan, Israel, Southern Turkey and Egypt (the Sinai Peninsula). The author then exploes the connection between military architecture and the development of siege warfare and examines the influence of methods of rule on the concept of defence and the development of fortifications.

Drawing upon excavation reports, field surveys and contemporary Arabic sources, the book provides the Arabic architectural terminology and touches on the difficulties of reading the sources. Detailed maps of the fortresses in the region, the Mongol invasion routs, plans of sites and photographs assist the reader throughout the book, providing an important addition to existing literature in the areas of Medieval Archaeology, Medieval military history and Middle Eastern studies.

Culture and Civilization in the Middle East

This series studies the Middle East through the twin foci of its diverse cultures and civilisations. Comprising original monographs as well as scholarly surveys, it covers topics in the fields of Middle Eastern literature, archaeology, law, history, philosophy, science, folklore, art, architecture and language. While there is a plurality of views, the series presents serious scholarship in a lucid and stimulating fashion.

The Origins of Islamic Law

The Qur’an, the Muwatta’ and Madinan Amal

A Jewish Archive from Old Cairo

The Formative Period of Twelver Shi’ism

Hadith as discourse between Qum and Baghdad

Folklore and Folklife in the United Arab Emirates

Structure and Meaning in Medieval Arabic and Persian Lyric Poetry

Muslims and Christians in Norman Sicily

Arabic-speakers and the end of Islam

Historical discourse and the nation-state

The Philosophical Poetics of Alfarabi, Avicenna and Averroes

The Epistemology of Ibn Khaldun

The Hanbali School of Law and Ibn Taymiyyah

Arab Representations of the Occident

God and Humans in Islamic Though

Malik and the madhhab of Madina

Al-Ghazali and the Qur’an

One book, many meanings

Birth of The Prophet Muhammad

At the limits of the labyrinth of Fez

The Status of Women in Islamic Law and Society

Islam and the Baha’i Faith

A comparative study of Muhammad ‘Abduh and ‘Abdul-Baha ‘Abbas

The histoy of Ibn al-Qū.tīya

Al-Ghazali, Averroes and the Interpretation of the Qur’an

Common sense and philosophy in Islam

Between Crusaders and Mongols

Between Crusaders and Mongols

Routledge is an imprint of the Taylor & Francis Group, an informa business

This edition published in the Taylor & Francis e-Library, 2010.

To purchase your own copy of this or any of Taylor & Francis or Routledge’s collection of thousands of eBooks please go to
www.eBookstore.tandf.co.uk
.

All rights reserved. No part of this book may be reprinted
or reproduced or utilised in any form or by any electronic,
mechanical, or other means, now known or hereafter invented,
including photocopying and recording, or in any information
storage or retrieval system, without permission in writing from
the publishers.

This ebook has been optimized for MobiPocket PDA.

Tables may have been presented to accommodate this Device's Limitations.

Table content may have been removed due to this Device's Limitations.