A Surprise for Lucy 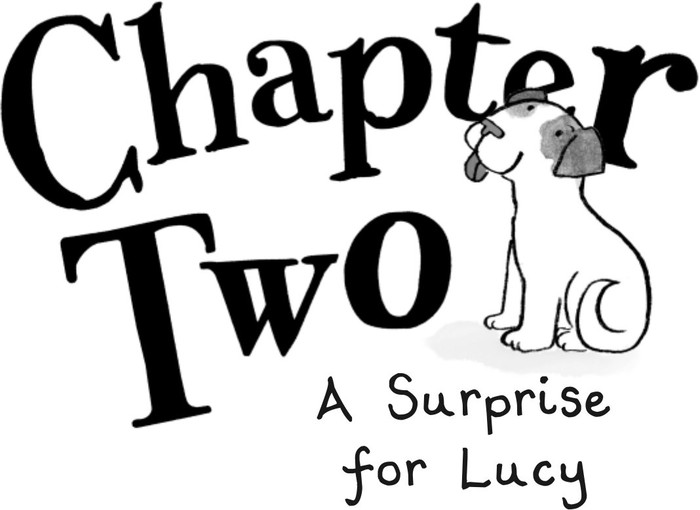 “I wonder what the special exciting thing’s going to be?” Christy whispered. Ellie shrugged. She and Christy were sitting with Lucy’s mum at the edge of the dance studio, where there were a few chairs for parents. Lucy and the rest of her dance class were working on a complicated routine to a song from
The Wizard of Oz
, and it was fun to watch. But no one had mentioned the surprise yet.

“Maybe someone from the show is coming to dance for them? It’s on in London at the moment, isn’t it?”

Christy nodded. “Could be that.”

“Is it OK if I get a drink of water?” Ellie asked Lucy’s mum. There was a water cooler by the door to the studio. Lucy’s mum nodded, and Ellie crept along the side of the room, trying not to disturb the dancers.

As she went back to her seat, Ellie
noticed a man and a woman sitting close to the water cooler. They were watching the girls dancing, and the man was making notes on a clipboard.

“Yes, the one with the curly dark hair,” the woman was saying, as Ellie walked past. “She’s a definite. Such a lovely smile, and she’s got real stage presence.”

Dark hair – Ellie glanced across at the girls dancing. Lucy was the only one with really curly dark hair. Quickly she looked back at the clipboard, which had a logo on the back. Eclipse Productions. Was it a TV company? And it sounded like they were interested in Lucy! She hurried back to her seat, and whispered her news to Christy and Lucy’s mum.

“That must be what Miss Louisa meant,” Lucy’s mum murmured. “I wonder what they’re here for.”

“Maybe they need dancers for a show. Or perhaps they’re going to be in a film!” Ellie whispered, her eyes wide. “Lucy told us that Miss Louisa sometimes finds performers for TV and films.”

Lucy’s mum smiled at her. “That would be great, wouldn’t it? Oh, shush a minute. I think Miss Louisa’s giving us a look.”

At the end of the class, the woman who’d been watching got up and came to talk to Miss Louisa. She was nodding, and Miss Louisa looked pleased.

“Remember I mentioned a surprise? This is Carla from Eclipse Productions, girls,” Miss Louisa announced. “They’re about to film a TV commercial close by, and Carla wants to ask some of you to audition for them.”

A thrilled whisper ran through the class, and Ellie beamed triumphantly at Christy and Lucy’s mum. She’d been right. She crossed all her fingers, hoping that they would pick Lucy for the audition.

Carla had a quick conversation with Miss Louisa, pointing to different girls, and then Miss Louisa called Lucy and two others to stay behind. Everyone else trailed out to get changed, looking rather disappointed. 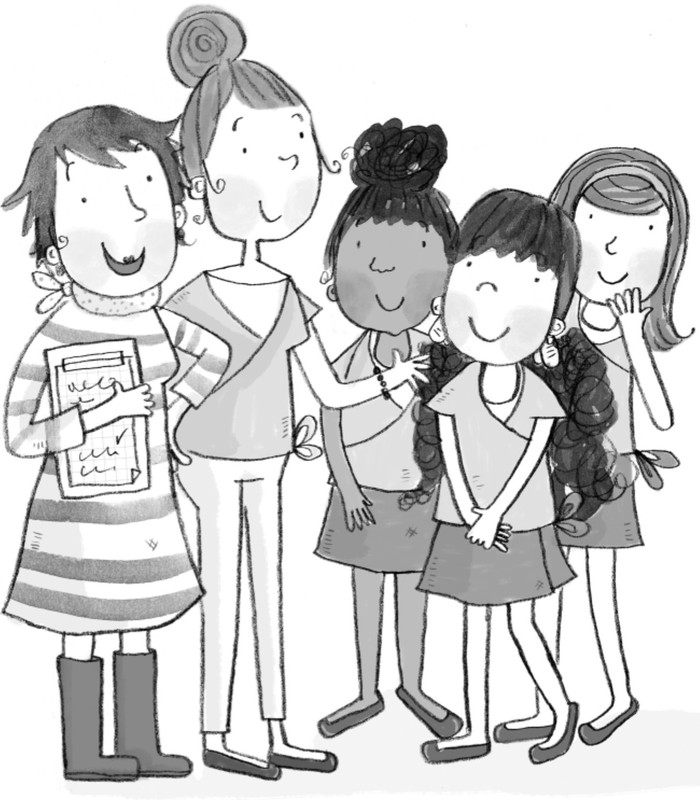 Carla had a chat with Lucy and the other two girls, and gave them some paperwork. Then Lucy came running over to Ellie and Christy and her mum, looking really happy. “Did you hear, Mum? An audition! It’s next Saturday, can I go?”

Her mum was reading the letter on the top of the sheaf of papers. “I suppose so, Lucy. It says the filming would only take one day, oh, and it’s in half-term, so you wouldn’t miss school.” She laughed. “Why not? But remember, Lucy, there might be lots of people auditioning. Don’t get too excited yet, will you?”

Lucy shook her head, but Ellie could see that her eyes were sparkling. Of course she was excited! Ellie was excited too, and she
was only a friend of the person going to an audition.

“Come on then.” Lucy’s mum led them out of the studio. “Let’s go to the DVD shop and choose a film to watch. And we’ll have a proper read of all this at home.”

The girls were so desperate to get back and read all about Lucy’s audition that they chose a DVD in about two minutes, without any arguing.

“I wonder what the ad is for?” Christy asked, as they walked back to Lucy’s house.

“I’m sure it’ll say somewhere in all that stuff.” Lucy’s mum glanced at the papers sticking out of her handbag. “I hope it’s not for something you hate, Lucy. Like eggs!”

Lucy made a face. “I don’t think I could
eat an egg, even if I was going to be on TV,” she agreed. “But I’d definitely try!” she added. “I can’t believe I’m going to an audition.”

When they got home, Lucy’s mum spread out the papers over the kitchen table, and everyone squished up next to her to look.

“So the audition’s at the production company’s office. Oh, and we need to apply for a licence, if you get the part,” Lucy’s mum murmured. “I hadn’t realized it was all so complicated.”

Lucy was scanning the different bits of paper, trying to find out what she might have to do. “It must say somewhere,” she muttered. “Ooh, if it’s for a clothes shop I might get to keep some!”

Ellie laughed, as she held up the piece of paper she’d been reading. “I’m not sure you’ll want to keep anything from this advert, Lucy. You could pass it on to me or Christy though.”

“What is it? Tell me!” Lucy asked excitedly. 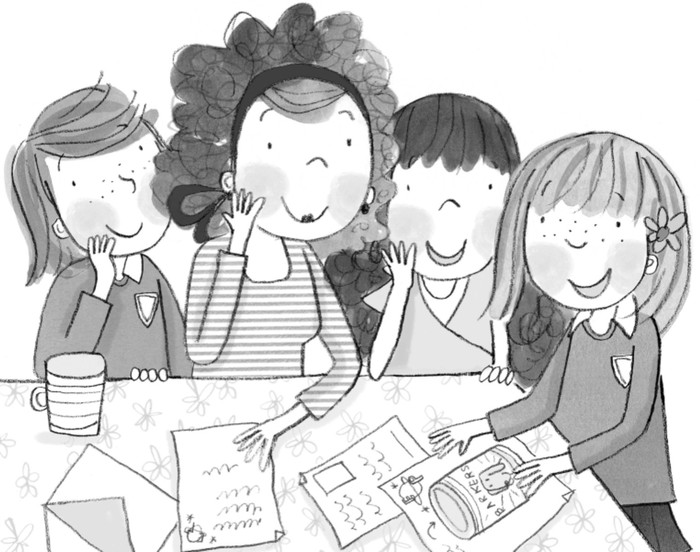 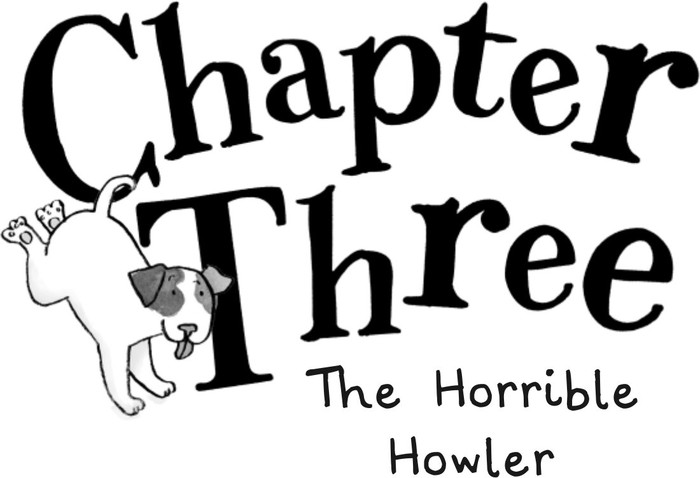 “Barkers dog food… Ohh.” Lucy read the description of the ad. “Do you think there’ll be a dog in it? I’ll have to act with a dog?”

“I don’t think there’s a dog at the audition, not from what it says here,” her mum put in. “But I imagine there’ll be a dog in the actual ad. Are you sure you want to do this, Lucy?”

Lucy nibbled her bottom lip, looking worried. Then at last she nodded. “I might never get another chance. And it isn’t as if
I’ll get the part anyway! I just want to see what it’s like going to an audition.”

Her mum frowned, looking concerned. “You never know. They picked you and Tasha and Sam out of the class, they obviously thought you were good.”

“That lady – Carla – she said you had stage presence,” Ellie added.

“I bet a dog that does acting would be really well-trained,” Ellie said. “It would be too nicely behaved to scare you.” She gave a tiny sigh. It would be lovely if Rascal was like that. He’d accidentally upset Lucy the first time she’d met him,
even though her friend loved him now.

Christy was nodding. “You really like Rascal and Bouncer, don’t you? Bouncer’s a big dog, as well. And Rascal’s … well, he’s bouncy… I’m sure you’d be OK. And you shouldn’t go to the audition thinking you won’t get it. You have to think you’re a star!” 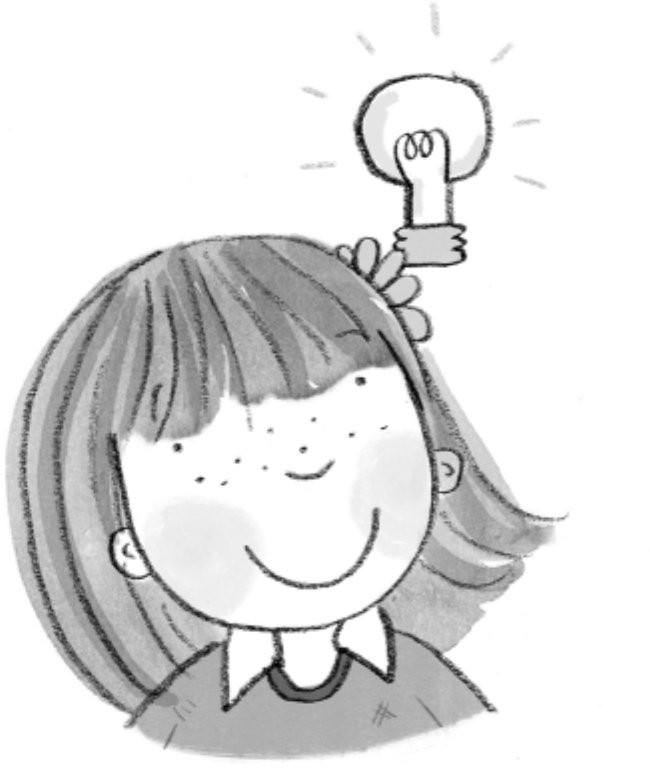 Ellie suddenly sat up, beaming. “I’ve got a brilliant idea. Dogs can tell when you’re nervous, it makes them really play up sometimes. We just have to get rid of your nerves! The audition’s on Saturday, so that gives us a whole week to
get you really happy with dogs. Then if they ask you at the audition whether you like them, you won’t even have to pretend. Would it be all right if Lucy came to the park with me and Christy and our dogs a couple of times this week?” she asked Lucy’s mum.

“Sounds like a great idea. But now we need to think about tea, otherwise you’ll never get to watch that film.” Lucy’s mum got up quickly, and then groaned as the phone rang. “Hello? Oh! Ellie, it’s your mum.”

“Hello, Ellie. I’m having a bit of a problem with Rascal, I’m afraid.”

“What’s the matter with him?” Ellie asked anxiously. “He’s not ill, is he?”

“No, he’s absolutely fine, don’t panic. He’s just being difficult.” Ellie’s mum sounded stressed, and Ellie realized that the funny noise in the background was Rascal. He was howling very, very loudly.

“I can hear him, Mum! He sounds really upset.” Ellie gripped the phone tightly. It was hard to listen to Rascal sounding so miserable. Maybe she should go home. 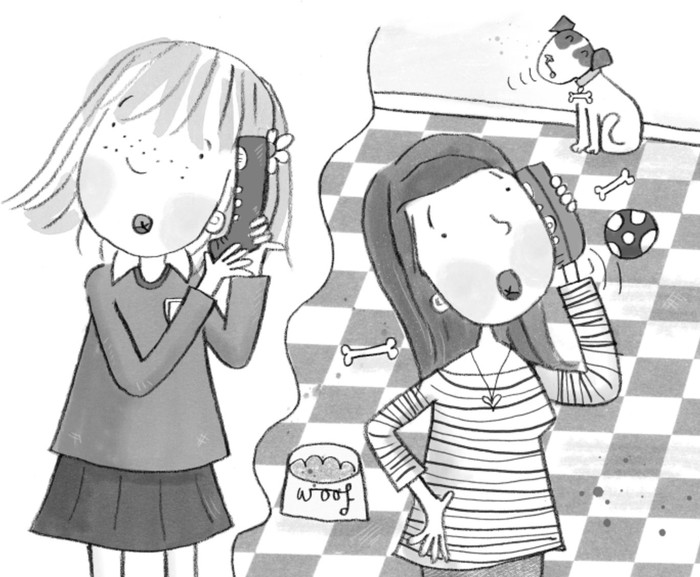 “You were right, Ellie. He doesn’t like you not being here and he’s making a fuss,” said Mum. “But he has to get used to it, or you’ll never be able to go anywhere!”

“I suppose so…” Ellie murmured.

“Anyway, I rang up so you can talk to him. Tell him to be quiet, Ellie, please! I’ll hold the phone up to him.”

“Is that Rascal?” Christy whispered. “Is he missing you?” 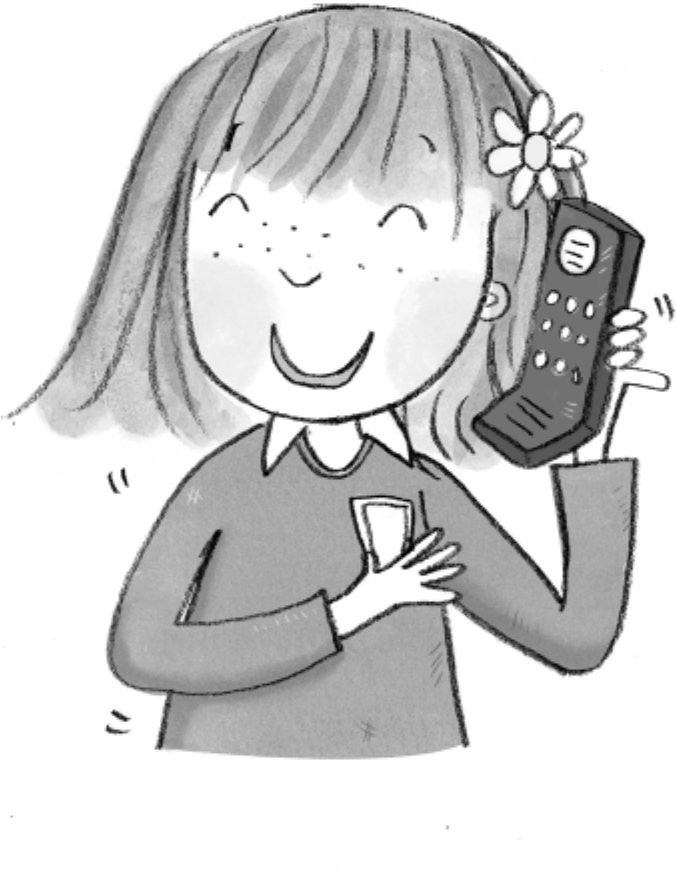 Ellie nodded. Then there was a curious snuffling sound on the other end of the phone, and Ellie giggled. Even though she was worried about Rascal,
it was funny to think of him on the phone to her. “Hey, Rascal…”

There was an excited little yap at the end of the line, and she heard her mum’s voice, sounding a bit distant. “Keep talking to him, Ellie. Thank goodness he’s stopped making that awful noise.”

“It’s OK, Rascal. I’ll be back home tomorrow. I’ll see you really soon, I promise. Did you go for a walk? Did Mum give you your tea?”

“That was the only time he did stop howling,” her mother muttered. “He’s looking a lot less upset now, Ellie. Hopefully he understands that you’ll be coming back tomorrow. Have a lovely time at Lucy’s, and tell her mum I’m sorry I had
to disturb you all. We’ll see you tomorrow, OK? Have fun!”

“Bye, Mum!” Ellie ended the call, and gave the phone back to Lucy’s mum. Poor Rascal. Maybe he really had thought that she’d left him for ever. The only other time he’d seen her pack a big bag was to go to Gran’s, but that time they’d taken him too.

“Was he missing you?” Lucy asked.

“Yes, he was driving Mum mad. But he’s OK now.” Ellie crossed her fingers. She wondered if Rascal would sleep in his basket for once, or if he’d go and sleep on Max’s bed. She didn’t think Lila would have him.

Ellie gave a little sigh. She’d been fine till Mum called. But now she really missed Rascal too!

After the excitement of the audition news, the girls found it really hard to settle down to watching the film in their sleeping bags. Then they talked in whispers late into the night – until Lucy’s mum came down to check on them and told them to go to sleep.

The next morning, they spread out the pet magazines all over the living-room floor, and tried to work out the best possible pet for Lucy.

“I’d really like a mouse,” she said thoughtfully. “I love them being so tiny. But Mum’s not keen at all. She says their tails look like worms.”

Ellie wrinkled her nose. “I can see what
your mum means,” she admitted.

Christy nodded, and then squeaked excitedly. “I know! Pass me that one.” She grabbed the magazine Lucy was holding. “Look, I knew there was something in here.” She showed Lucy a picture of a soft, golden-brown creature, with big black eyes. And a lovely long, furry tail. “Gerbils! They look a bit like mice, but they’ve got furry tails!”

“Oh, he’s so cute…” Lucy stroked the photo. “I never thought of a gerbil.”

Christy smiled proudly. “Your mum couldn’t not like him, could she?”