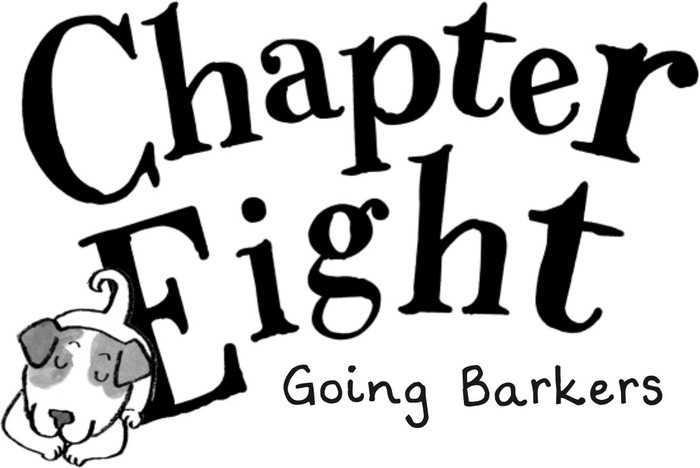 It looked like the actress wanted to make even more of a fuss, but a young man with spiky hair came over just then, and introduced himself as Ben, the dog wrangler. Ellie wasn’t quite sure that she wanted Rascal wrangled, but apparently Ben was just supposed to make Rascal do the stuff that was needed for the filming. He started off by trying to give him a wash and brush-up, which didn’t go well. Rascal didn’t
see why his claws needed polishing, and he kept wriggling out of Ben’s grip.

The filming wasn’t nearly as exciting as Ellie had thought it would be. There seemed to be endless stops and starts, as the crew tinkered with lights and moved screens here and there to reflect the artificial sunlight around.

Rascal was bored too. After Ellie had stopped him exploring the garden, he had to sit and wait by the chairs, and every so often he was taken to stand under hot lights. He didn’t have any idea why, and he didn’t like them very much.

“OK, let’s start filming the rolling-over sequence.” Dan beckoned to Ben, Ellie and Rascal to come and join Lucy under
the lights. “We want him to roll over and over, and then leap up. Right?”

Ellie nodded, but she was panicking inside. She really wasn’t sure if Rascal could do that, especially when the instructions were coming from Ben and not her. But she didn’t want to say so in case they decided to get Freddie the “trained” dog back, and to take Lucy’s part away from her.

She watched anxiously as Ben said, “Down, Rascal! Roll over!” 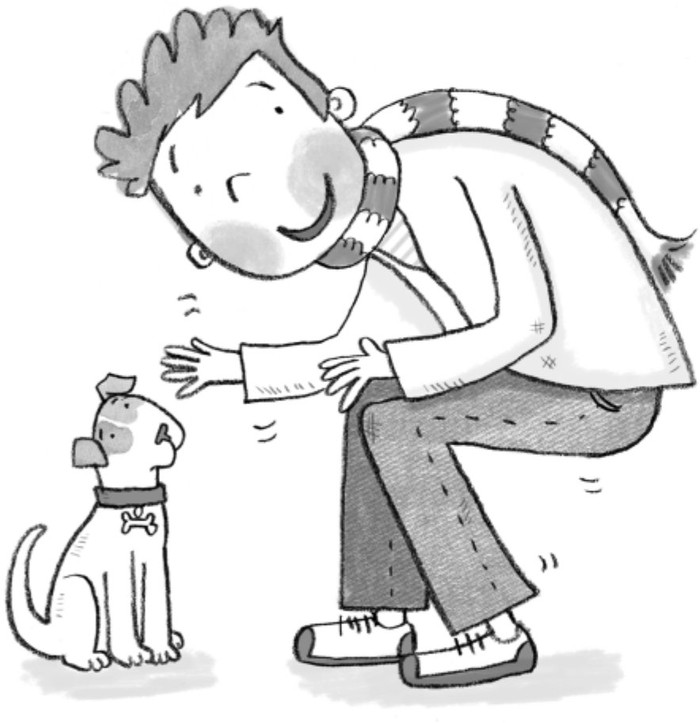 Rascal simply put his head on one side and stared at Ben curiously.

The film crew laughed. He was very cute, with his head on one side like that, looking at Ben as if he thought the man was rather strange.

“Shall I try?” Ellie asked nervously. “He’s not used to other people telling him what to do…”

Ben looked slightly annoyed, but he nodded, and Ellie grabbed the treats she’d brought with her. “Down! Roll over, Rascal!” She rattled the bag of dog treats temptingly, and Rascal eyed it.

“Roll over!” Ellie tried to make her voice as encouraging as possible, and Rascal seemed to suddenly remember what he was supposed to do. He lay down, and then flipped over on to his back, waving
all four paws in the air, and wagging his tail at the same time.

“Good boy!” Ellie told him, wishing she could get a bit closer. But she couldn’t be in the shot with Rascal. “Roll over. Roll over.” 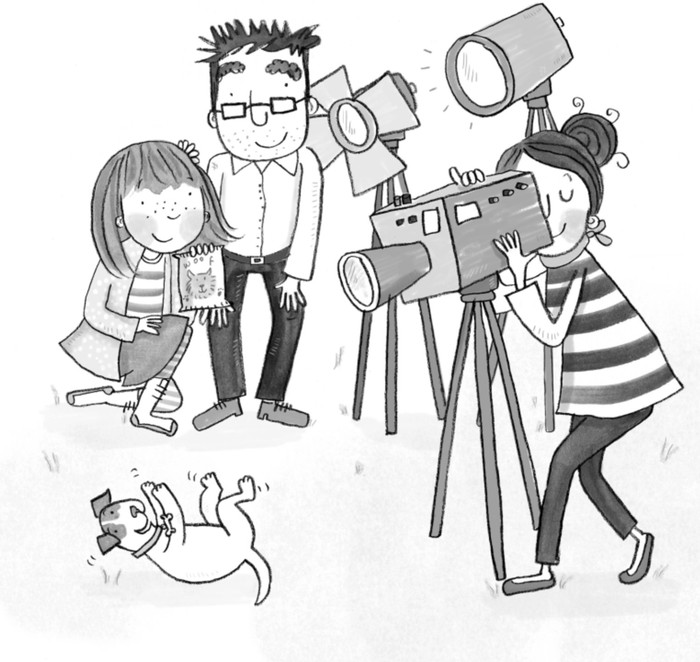 Rascal did it twice more, as she’d asked, and then he got up, and marched out of shot and determinedly over to Ellie, as if he’d given up waiting, and he’d like his treats now, thank you very much.

Ellie gave him several out of the packet, and looked up hopefully at Dan. Had that been what they wanted?

Dan was frowning at the laptop where they were playing back the last shot. “I’m still not totally happy with the light,” he mused. “Oh, and can he do it faster, please?”

Ellie shook her head. There was really no point pretending. “I’m sorry, it’s not his best trick. I don’t think he can go any faster.”

Dan sighed. “Well, we’ll do another take, and see if we can improve the light anyway.”

Eventually, Dan was happy with the shots of Rascal rolling over, and they moved on to Lucy’s “mum” putting down a bowl of delicious Barkers food. She cooed delightedly at Rascal while she did it, as though she thought he was gorgeous. Ellie was impressed – she was obviously a very good actress.

Rascal was supposed to wolf the food down eagerly, and this was the one part of the ad that Ellie hadn’t worried about. Rascal ate everything, all the time. Even things that weren’t food.

So when the actress put down the big bowl of Barkers, Ellie wasn’t expecting Rascal to look thoughtfully at it, and then lie down as though he were planning a nap.

Everyone was rather surprised, and they did it all over again.

“Yummy food, Rascal!” Ellie hissed. It was no good. She didn’t know if Rascal just wasn’t hungry after all the dog treats, but there was no way he was going to eat the dog food.

Ellie giggled nervously as he did it a third time. It was quite funny that the whole ad was meant to show how delicious Barkers was for growing dogs, and Rascal clearly didn’t like it at all! “Um, I don’t think he likes it,” she told Dan apologetically.

“This is ridiculous!” snapped a man in a suit, who’d been standing behind the lights, watching. “That’s our extra-meaty kind.

It’s very popular. Dogs love it! They go barkers for it! That’s our slogan!”

Ellie opened her mouth, and then shut it again quickly. She hadn’t realized that someone from the dog-food company was watching. 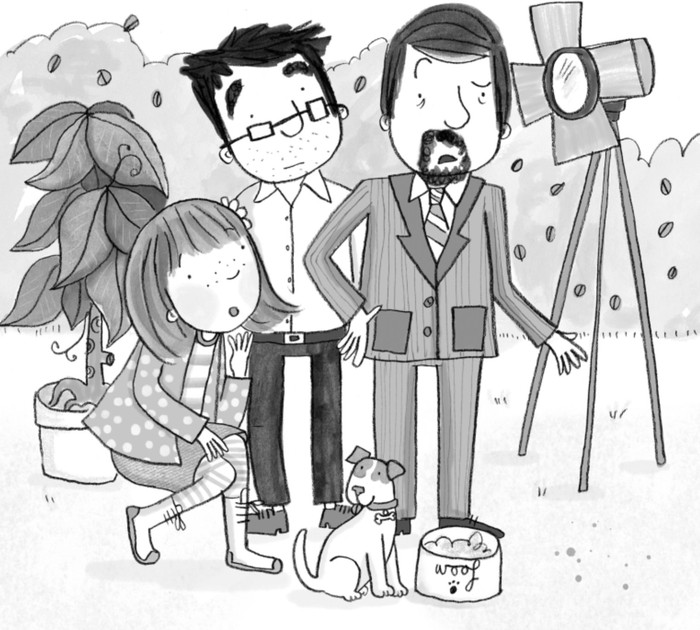 “Ellie!” Lucy whispered. She was looking a bit green. The smell of Barkers was very strong. “I’ve got an idea…”

Five minutes later, Ellie smiled at Dan, and the dog-food man, with her fingers crossed behind her back. “I’m sure he’ll be fine now,” she explained. “He, er, just needed a wee. That’s all.”

Dan gave her a slightly doubtful look, but he called everyone back for another take.

Ellie watched hopefully as the actress put down the bowl of food for Rascal. 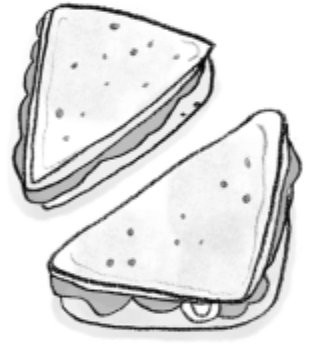 The girls had begged the caterers for ham sandwiches, then they’d taken out all the ham and hidden it under the Barkers while everyone was gathered round muttering about the lighting
again. As a final touch, Lucy had rubbed ham all over the outside of the bowl, so that it would smell yummy to Rascal.

“Look at that!” the dog-food man said triumphantly, as soon as they’d finished the shot. “Wolfing it down! I told you dogs love it.”

Ellie smiled, hoping he wouldn’t spot Rascal tugging the bits of ham out from underneath the dog food… 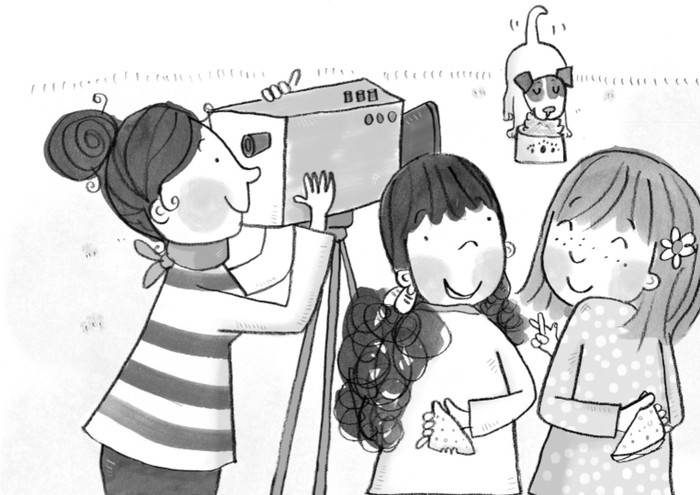 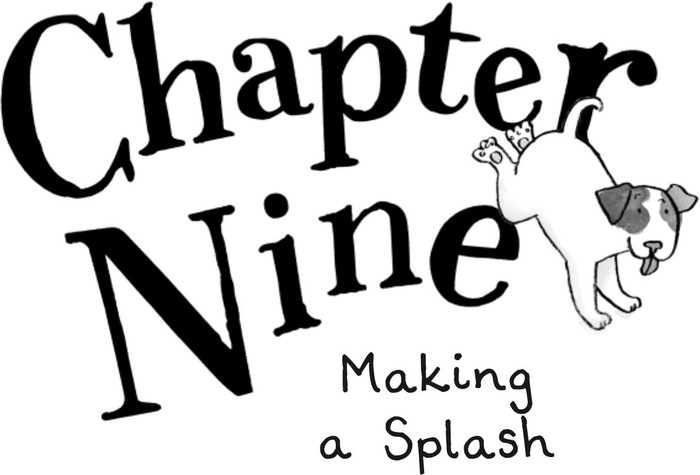 Rascal’s final scene was the one they’d spent ages practising the day before. Lucy was confident throwing a ball for him to fetch now, and firm enough to take it out of his mouth when he brought it back to her. Sometimes he liked to hang on to it, and growl a little bit. But Ellie was sure that Lucy wouldn’t mind that after their practice.

Rascal had had a bit of a rest while all the equipment was moved around for the
new shot, and he was feeling bright and bouncy and full of ham. He barked delightedly when he saw the ball in Lucy’s hand, and there were admiring murmurs from the crew as he skipped and danced around Lucy, looking like the happiest dog ever. Exactly what they needed for the shot. Ellie smiled proudly. Finally he was behaving himself!

Lucy wasn’t meant to throw the ball very far, as there wasn’t a huge lot of space in the garden and they needed to be able to keep Rascal in the shot as he fetched it.

The first couple of throws went too wide. Rascal happily fetched them anyway, but Dan was shaking his head.

“Try moving back a bit,” he called to Lucy. “Mind the pond though!”

The best part of the garden, Ellie thought, was the big fish pond in the middle. It had amazing fat koi carp swimming in it, which luckily Rascal hadn’t noticed or they wouldn’t have been able to get him to do anything.

It was a perfect throw. Too perfect, actually. Lucy lobbed the ball gently towards Rascal, in exactly the right place, just in front of him. Rascal gave a huge leap into the air, seized the ball in his teeth – and hurtled towards Lucy’s arms, scrabbling his paws and expecting her to catch him,
just like Ellie usually did.

But Lucy didn’t catch him. Ellie watched in horror as Rascal landed at her feet, and Lucy toppled over backwards, straight into the lily pond. 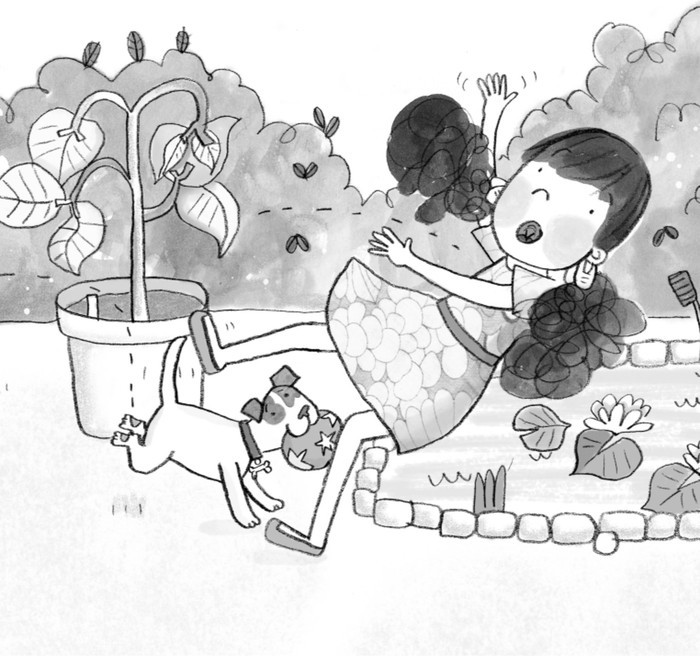 Ellie ran to help the crew fish her out, hoping that she wasn’t hurt. What if she’d hit her head? But Lucy was fine – just wet and cold. Everyone crowded round her, fetching towels and fussing, and then she was hurried into the house to get dry.

Ellie looked round at Dan, thinking she should go and apologize, but then she realized he was laughing. He was holding Rascal, who was licking his ear happily. 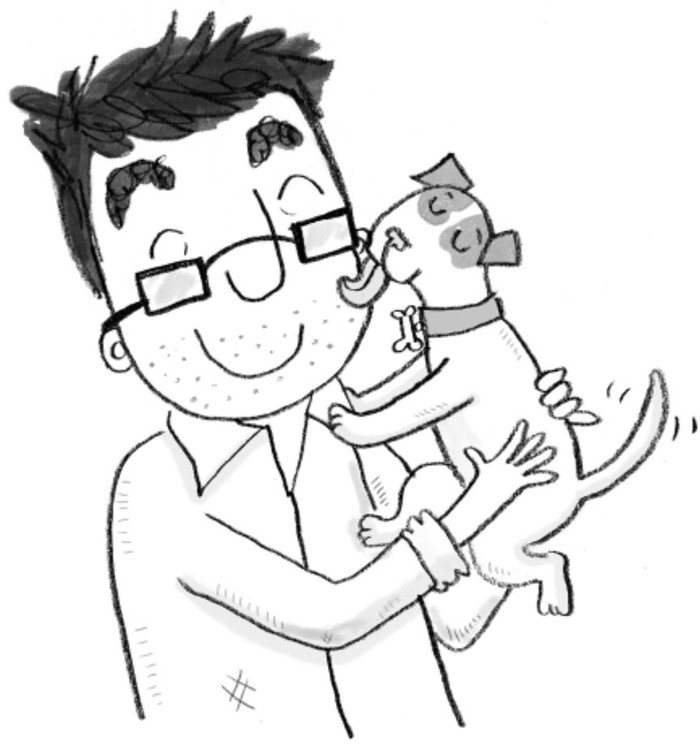 There was a laptop set up, and Dan was watching the footage of Lucy falling in the pond, and he looked delighted.

The man from the dog-food company was nodding. “Really funny. Just the impression we want. Loads of energy, and all because of Barkers dog food.”

“Perfect. We’re all done then.” Dan tickled Rascal’s ears. “You turned out to be a little star, didn’t you?”

Ellie hid her smile. She wasn’t going to tell them it was actually all down to ham.

She took Rascal back from Dan, and hurried indoors to see how Lucy was.

“I’m really sorry!” she whispered to Lucy, who was wrapped up in a huge fleecy robe and was sitting with her mum, drinking a mug of hot chocolate. “Are you OK?”

Lucy nodded, but she looked worried. “Are they really cross?” she asked.

Ellie shook her head. “No! They think it’s fantastic, and they want to put it in the ad.” She gazed doubtfully at Lucy. Would she mind being on TV falling in a pond?

But Lucy didn’t seem to mind at all. “They do?” she asked happily. “Oh, Ellie, that’s brilliant. I thought they were going to get rid of me!” She kissed the top of Rascal’s head. “You’re such a star!” 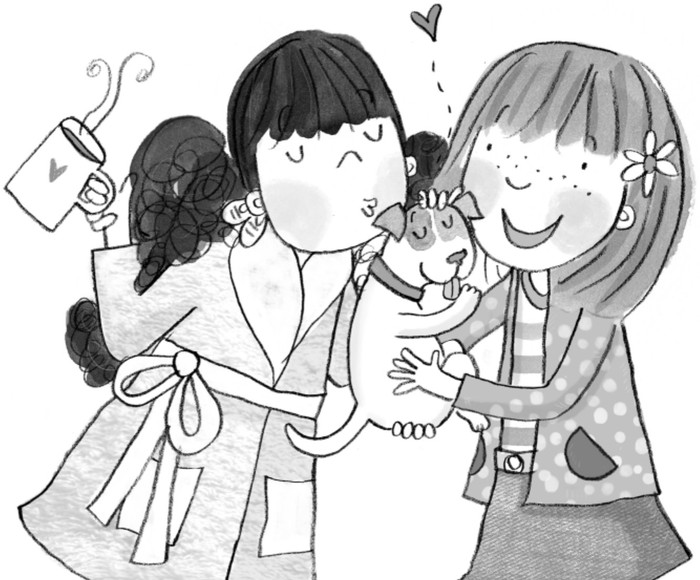 Like Me by Chely Wright
The Last Israelis - an Apocalyptic, Military Thriller about an Israeli Submarine and a Nuclear Iran by Beck, Noah
The Grave Switcheroo by Deveraux, Cathy
Sway's Demise by Jess Harpley
The Good Mother by A. L. Bird
Bound: The Pentagon Group, Book 3 by Rey, Rosemary
Tatuaje II. Profecía by Javier Pelegrín Ana Alonso
Wuthering Heights by Emily BrontÎ
Lady Penelope's Christmas Charade, a Regency Romance by Birney, Lilia
Tulips for Tonica by Raelynn Blue