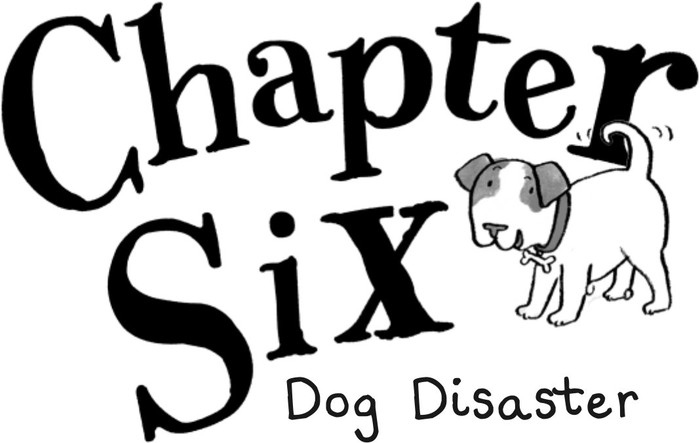 “Oh, why does the phone always ring when I’m cooking!” Mum sighed, and licked her buttery fingers before she picked it up. “And watch Rascal, Ellie, he’s about to go for that bit of pastry!” She shook her head. “If Jo could see him at home, I bet she wouldn’t be putting him up to the intermediate class!”

Ellie swiped the pastry out of the way, and giggled as Rascal glared at her. That pastry had been his!

“It’s Lucy, for you.” Mum sounded surprised. She handed Ellie the phone, and Ellie heard Lucy’s panicky voice on the other end of the line. She gave Mum a worried look. It was Monday, the day of the shoot for the ad, and Ellie had been sure that Lucy would be fine! What could have gone wrong? Lucy had popped round the afternoon before to borrow Rascal to rehearse the script with, and it had gone brilliantly. Lucy had been looking forward to the shoot – Ellie would never have believed that she used to be afraid of dogs. She’d known all her lines perfectly too.

In the ad, Lucy was supposed to throw a ball for her dog to fetch, and she had Rascal racing up and down the garden so
many times that he gave up in the end, and went and hid under a bush to sulk because he was too worn out.

So what had gone wrong?

“What’s the matter?” Ellie asked Lucy anxiously. “Is it the dog?”

“Yes!” Lucy wailed. “He’s called Freddie and he’s huge! Well, actually he’s not as big as Hugo, but he’s not friendly like Hugo is, so he seems bigger. He’s really, really scary!”

Ellie didn’t know what to say. She’d been so sure that Lucy would be OK.

“He jumped up at me when I was supposed to throw the ball for him,” Lucy explained, sounding rather tearful. “I really thought he was going to bite me. The lady who owns him said he just wanted the ball,
but his teeth were so near my hand. I don’t think I’m being stupid, Ellie, he’s not a nice dog like Rascal or Bouncer or Hugo.” 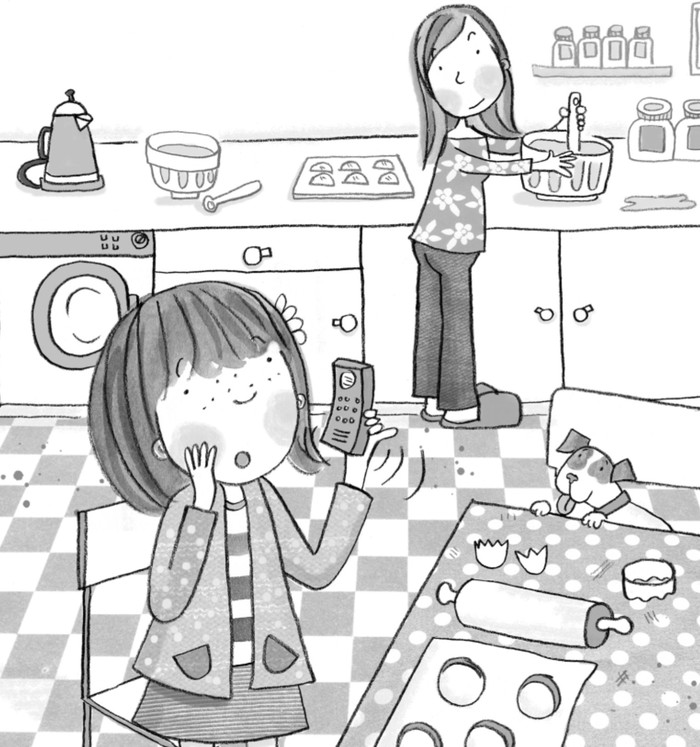 “So what happened after he jumped at you?” Ellie asked.

Lucy sighed. “I fell over. And my costume got all muddy, so now everyone’s annoyed because they had to sponge it clean, and it took ages. Then we tried again, and Freddie growled at me, and I forgot my lines.” She really was crying now. “I’m going to lose the part, I’m sure I am.”

“Why can’t they get a different dog?” Ellie said crossly. It didn’t seem fair on Lucy at all.

“They are trying, but it’s hard to find a dog at the last minute,” Lucy explained. “Ellie, can I ask you a huge, huge favour? Would you come over to the set? It isn’t far from your house at all. They said they might
let me keep the part if I can do it with a different dog… I told them I knew a really sweet, clever dog, and he’s very funny, and I’m not scared of him… And he’s the right age – still a puppy, but an older puppy…”

It took Ellie a few seconds to realize what Lucy meant – that the funny, clever dog she was talking about was Rascal.

“You want Rascal to be in the ad with you?” Ellie squeaked delightedly. 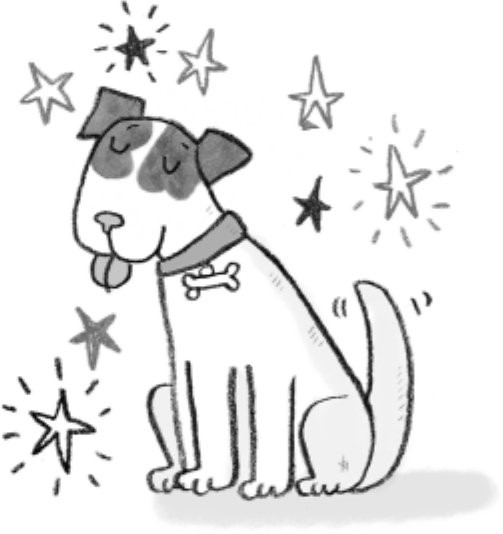 “Yes! He is sweet, Ellie, you know he is. I bet they’d love him. The director said Jack Russells were cute. And I’m not scared of Rascal at all any more. I’m sure I could do the ad with him.”

Ellie nodded, and then remembered that she was on the phone and Lucy couldn’t see her. “Do you think he’d be able to do it?” she asked Lucy. “What about the rolling?”

The dog in the ad had to roll over, and Ellie had thought that sounded great in the script. She’d asked Jo how you trained a dog to roll over, at the end of their class on Thursday. It was a difficult one to do, Jo had explained, because most dogs don’t like to show off their tummies. It was the way a dog would signal that he thought he had lost a fight, and he wanted to give in.

Rascal didn’t seem to mind showing his tummy, but it was still tricky. It had taken them a while to go through the moves, as
the dogs had to start off with “down”, which they already knew, and then learn to roll on to their side, their back and finally the right way up again. Rascal had sort of managed it when Lucy practised with him on Sunday, but Ellie wasn’t sure he could do it on command.

Lucy sighed. “He might be able to. He was great at fetching when we practised, wasn’t he? I know he’s naughty sometimes, but that Freddie wouldn’t do what he was told either. His owner tried to stop him jumping up at me and he wouldn’t. She said it was because he could tell I was scared.”

Ellie frowned thoughtfully. “All right. I’m going to ask Mum. Lila’s gone shopping and Max is over at Lewis’s house, so we
were just doing some cooking. I bet she won’t mind.”

Ellie smiled up at her mum, who was looking at her curiously. “Actually, she’ll probably love coming to a film set! Get your mum to tell her where we need to go!” Ellie thrust the phone at her mum, and picked Rascal up. “Would you like to be a TV star, Rascal?” she asked him, dancing around.

Ellie was pretty sure that meant “yes”! 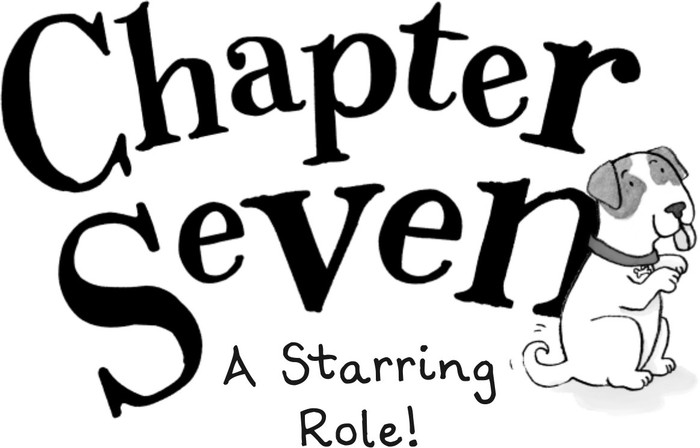 “Wait for me, Ellie!” Mum was hurrying along after them, as Ellie read the house numbers, and Rascal bounced excitedly on the end of his lead, sensing that something special was happening.

“It must be soon,” Ellie called back. “This is number fifty, and we’re looking for seventy-three.” She looked down the street, frowning. It didn’t seem at all smart enough to be used as a film set. But the lady at the
audition had told Lucy that it was used a lot, as it had a beautiful garden. It had been in loads of TV programmes, apparently, when they wanted a “normal” sort of house.

“Look, here it is.” Ellie hung back suddenly, feeling shy. The front door of number seventy-three was open, and a man was carrying some equipment in from one of the big vans parked outside. There was a catering van too. People were hurrying around inside the house, looking busy, and Ellie didn’t like to disturb them. Then a black-haired lady carrying a clipboard spotted her, and came over, looking hopeful. “Are you Lucy’s friend? The one with the puppy? Is this him?” Ellie nodded, and realized it was Carla, the same lady from the dance class. “This is Rascal,” she explained. “Lucy called me…”

“Yes, it’s been a disaster!” Carla rolled her eyes. “That Freddie was supposed to be really sweet-natured, but he didn’t get on with Lucy at all and we had to send him home.” She looked down at Rascal worriedly. “He’s very small…”

Ellie had no idea who Dan was, but she and Mum followed Carla through the house out into the garden, which was a tangle of cables, growing enormous lights instead of flowers. It was a truly weird-looking place.
If Ellie glanced at it sideways, it almost seemed like a normal garden, but then she could see that half the plants were artificial, or real ones that must have been brought over in pots to make it look like summertime.

Lucy was sitting on a folding chair to one side, looking anxious. She was wearing a pretty summer dress, with her coat on over the top. Her mum was beside her, and she nudged Lucy when she saw Ellie and Rascal coming. 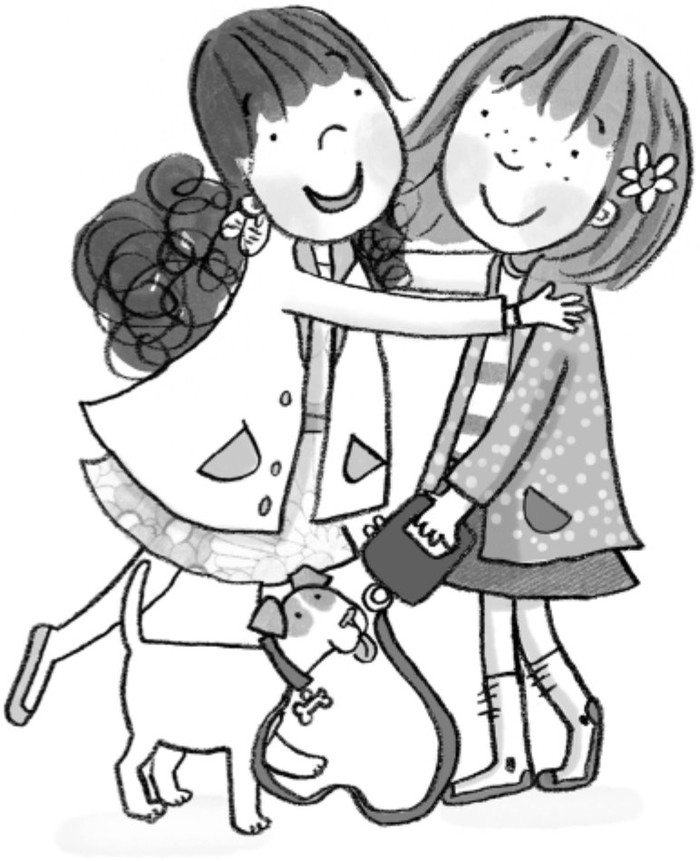 “Oh, thank you, Ellie!” Lucy dashed over to hug her. “You’re such a star. And you’re going to be a star too, Rascal.”

Lucy took Ellie’s hand and pulled her over to a huddle of people looking at something on a laptop.

Carla followed them. “Dan, this is the new dog,” she called.

A tall, very thin man with a worried face and huge eyebrows turned round to look at them all. His eyebrows flew up when he caught sight of Rascal, but then he walked round Ellie and Rascal thoughtfully.

Rascal sat down and panted up at him, his tongue hanging out cheerfully.

“He might be all right,” Dan muttered, crouching down and staring at Rascal. “I had a much bigger dog in mind, of course, but still…” Rascal barked at him and wagged his tail, and Dan laughed. “He’s certainly a little character. Heard me saying you ought to be bigger, did you?” He glanced up at Ellie. “Can he do tricks? Does he fetch, roll over, that kind of thing?”

“Some tricks…” Ellie said slowly. Rascal did fetch. She still wasn’t quite so sure about the rolling over. But she wasn’t going to say that.

“Well, we’ll give it a go. Can you just wait over there for the minute? We’ll get everything set up again. Lucy said you’d seen the script? You know what he has to do?”

Ellie nodded. She just hoped Rascal would do as he was told. She and Mum hurried over to sit next to Lucy, who looked frozen in her summer dress. Lucy’s mum took Ellie’s to go and get a cup of tea, and the girls and Rascal were alone for a moment.

Lucy handed it to her, and Ellie read it
through carefully. Rascal ought to be able to do it all. It started with Lucy laughing at him as he rolled over and over.

Ellie and Lucy looked up at once. They’d been peering at the script, and Ellie hadn’t noticed that Rascal was at the end of his lead, exploring. Now he was gazing up at a woman who’d been sitting on a chair close to them. She was staring down at her foot with a disgusted expression on her face.

“It licked me!” the woman told Ellie frostily. She was wearing pretty summer sandals, and there was a lot of foot on show for Rascal to lick.

“I’m really sorry,” Ellie apologized, even though she didn’t feel like it. She scooped Rascal up. It was only a little bit of lick! And Rascal was a “he”, not an “it”! 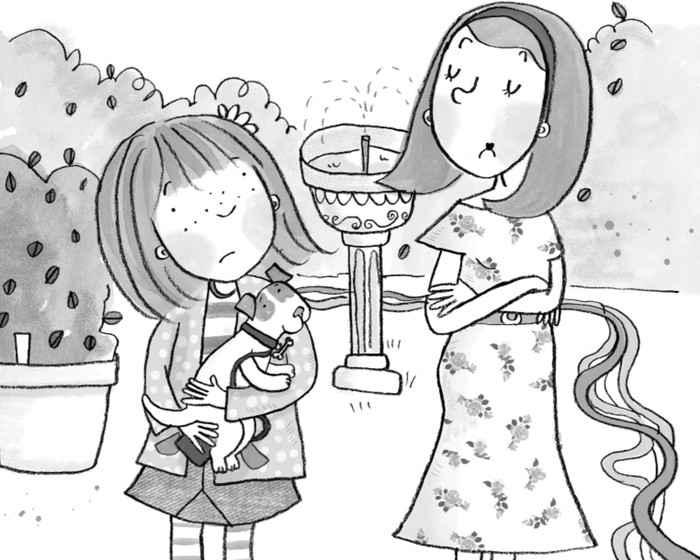 Women In Control by J.T. Holland
Bowles, Jan - Bound by the Montana Mountain Man [Cowboy Bad Boys 3] (Siren Publishing Classic) by Jan Bowles
Soldier of Fortune by Diana Palmer
Stuck on You by Thurmeier, Heather
The Short Life of Sparrows by Emm Cole
Revenge by Meli Raine
Many and Many a Year Ago by Selcuk Altun
Sometimes We Ran (Book 3): Rescue by Drivick, Stephen
Talk to Strangers: How Everyday, Random Encounters Can Expand Your Business, Career, Income, and Life by David Topus
The Dreadful Future of Blossom Culp by Richard Peck