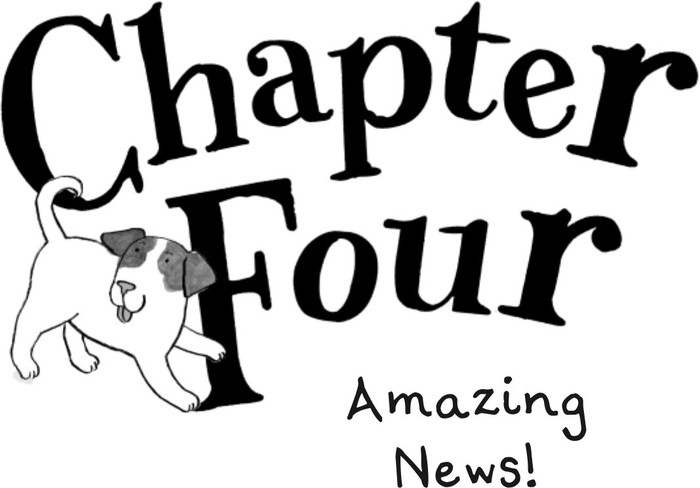 When Ellie got home, Rascal was so excited to see her that she thought he might burst from barking. And since then he’d insisted on following her everywhere. If she went to the loo, he sat outside the door making worried noises, as though he thought she might climb out of the bathroom window and leave him.

They were having Grandad, Auntie Gemma and Liam over for Sunday lunch, and every time Ellie went to open the front
door, Rascal was glued to her heels.

“Hello, Ellie!” Grandad gave her a hug. “How was your sleepover?”

“It was great! Lucy’s got an audition to be in a dog-food ad! And she thinks she might get a pet gerbil. But Rascal was really missing me, Grandad. Mum had to ring up so I could talk to him, because he wouldn’t stop howling.”

Rascal looked up at Grandad. He was sitting by Ellie’s feet, with a saintly expression on his face.
Who, me?
he seemed to be saying.

“Little monster.” Grandad rubbed Rascal’s ears. “You’ve got them all wrapped around your tiny paw, haven’t you? Are Liam and Gemma here yet, Ellie?”

“Yes, they’re in the kitchen with Mum and Dad.” Ellie and Grandad went through to the kitchen, where Mum was preparing the roast lunch.

Auntie Gemma was looking very smart, in a bright pink dress. When Ellie came in, she glanced up at her boyfriend Liam, and then smiled at Ellie. “Could you get Max and Lila to come down, Ellie? I’ve got some news, and I can’t wait any longer!”

Ellie dashed upstairs to yell for Max and Lila, and soon everyone was squashed round the kitchen table.

“We’re getting married!” Auntie Gemma announced. She waved her hand around, showing a sparkly engagement ring, with a green stone in it. 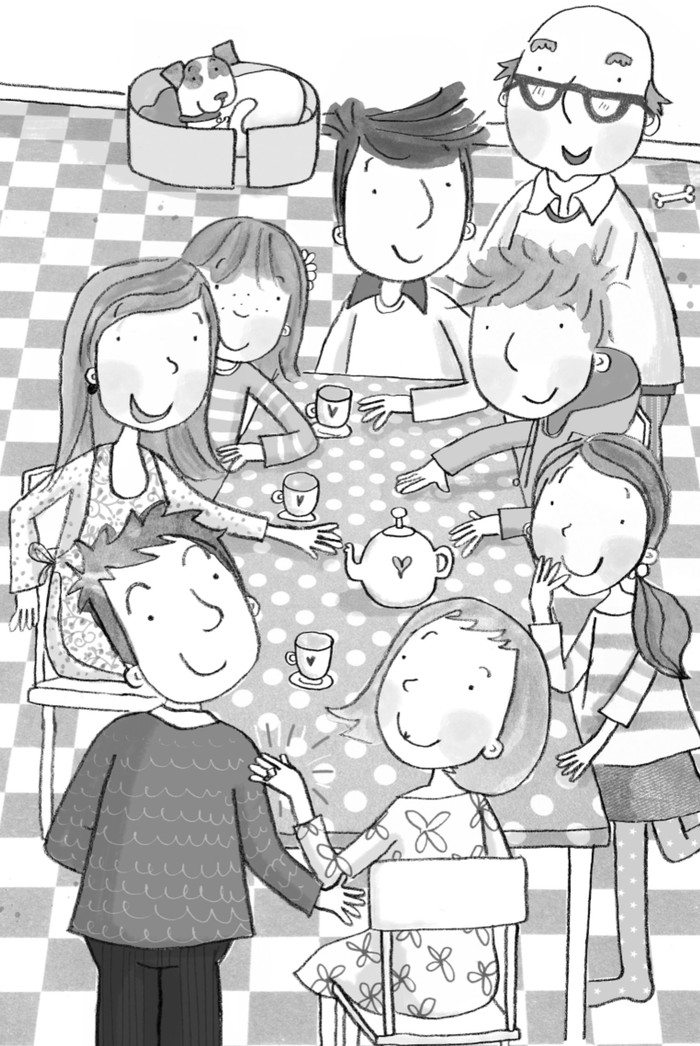 “It’s an emerald. I’ve had my hand in my dress pocket ever since we got here, I wanted to tell you all at once!”

“Oh, Gemma, that’s great news.” Ellie’s mum was almost crying. “When are you getting married? Soon?”

“I knew it!” Ellie told Auntie Gemma. “When you found the ring in the Christmas pudding!”

Auntie Gemma smiled. “I’m sure that did help Liam think it was the right time. Will you and Lila be my bridesmaids, Ellie?”

Ellie beamed, and Lila hugged Auntie Gemma. “What are you going to wear? What do you want us to wear? Hang on, I saw the most amazing wedding dress in a magazine, I’ve got it upstairs somewhere.”

Mum laughed. “Lila’s going to be your wedding planner if you’re not careful, Gemma. Oh, goodness, I nearly forgot about lunch! Max, Ellie, can you help me bring all the dishes over?”

Ellie got up, and sighed as Rascal immediately jumped out of his bed, and sidled up next to her leg, in case she might be about to leave him again.

Lila raced back into the kitchen, waving her magazine, which had photos of a singer’s wedding. “Look at this! Isn’t it the
nicest dress? I don’t really like her music, but that doesn’t matter.”

“As long as we don’t have to play any of her songs at the wedding.” Liam shuddered.

Ellie hurried over to the table, clutching a big dish of peas, eager to see the dress. 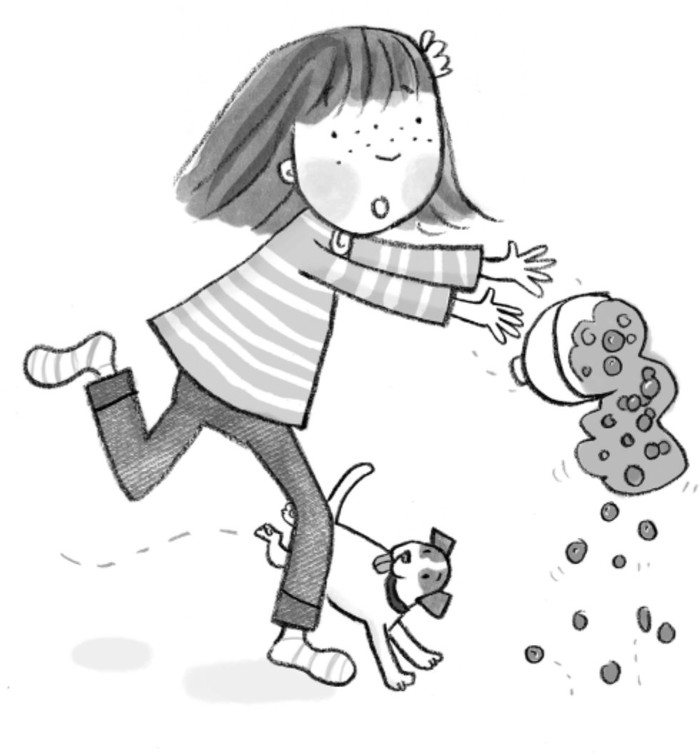 Or rather, she meant to hurry to the table. She forgot about Rascal, attached to her feet, and tripped over him, sending the bowl flying and an avalanche of peas all over the floor and the table. And Lila’s magazine.

“Are you OK, Ellie?” Mum asked, helping her up.

Ellie nodded. “Did I squash Rascal?” she asked in an anxious voice, looking around for him.

Dad was looking at the photos in the magazine, which were now mostly green. “I think a green wedding dress would suit you, Gemma. It’s a bit different, anyway…”

Auntie Gemma didn’t look as though she thought it was very funny.

“And that’s what it’s been like ever since!” Ellie told Christy and Lucy at school the
next morning. “Wedding, wedding, wedding! I’m really excited about being a bridesmaid, but Mum and Auntie Gemma couldn’t talk about anything else. And Lila’s just as bad.” She shook her head. “I’m glad to get away from them all to go to the park with the dogs this afternoon. You’re both still OK to come, aren’t you? We can’t go for too long, because I’ve got dog training, but even a little bit of practice will help.”

They had arranged that Lucy and Ellie would come over to Christy’s, and Christy’s mum would take the three girls and Rascal and Bouncer to the park, so they could try to thoroughly de-scare Lucy.

“What are you going to do, exactly?” Lucy asked, looking a little nervous.

“We’re not telling you,” Christy said firmly. “But it’s nothing you need to be worried about, we promise.”

Ellie nodded. She had given Rascal a firm talking-to that morning, all about how he had to be on his best behaviour, and not scare Lucy. He’d stared at her, his big brown eyes looking very innocent, and she’d been absolutely sure he was listening. But then he’d given her a massive lick all down her nose. So maybe not.

“First, you have to lie down.” Ellie pointed dramatically at the grass, and Lucy looked horrified.

“It isn’t
that
muddy,” Ellie argued, looking around the park. “Oh, OK. Maybe it is. Please can you lie on this bench then?”

“I’m not sure about this,” Lucy muttered, but she did as she was told, peering nervously sideways to try and see what Ellie and Christy and the dogs were doing.

“What’s that?” she gasped, when Ellie scattered something over her coat. “What are you doing, Ellie?” 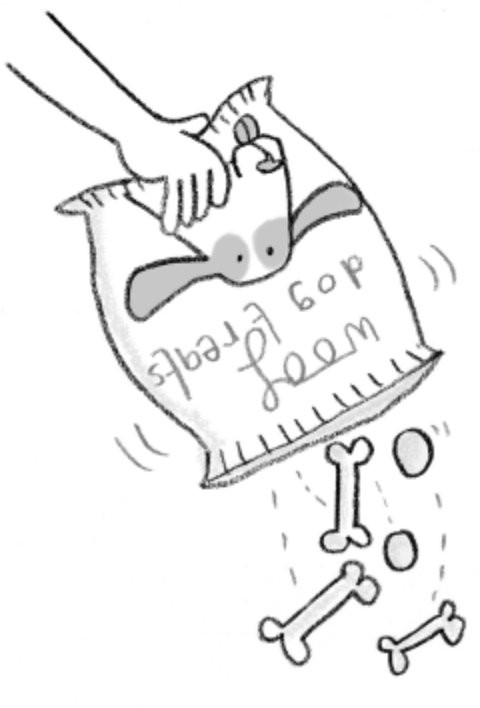 “It’s OK,” Christy said soothingly. “It’s dog treats, that’s all. We’ve covered you in dog treats, and Rascal and Bouncer are going to eat them off you. They’ll be really gentle, I promise. You won’t even feel them, probably.”

Lucy didn’t actually fling herself off the bench, but she looked like she wanted to. They’d already made her hold the dogs’ leads and run up and down the park, and got her to play Frisbee with them, but this was a bit different.

Bouncer started delicately crunching the dog treats off Lucy’s knees, and she giggled. “It’s all tickly!”

“See? We told you it would be all right,” Ellie said. “You’re going to be fine on Saturday after this. We can do a
last-minute
top-up session on Saturday morning before the audition, too.”

Rascal was standing on his hind legs, trying to join in with Bouncer, but the bench was too tall for him.

“Oh no, I didn’t think about Rascal not being able to reach,” Ellie muttered. “Maybe if you hold your arm out, Lucy. Rascal, no!”

Rascal had given up waiting. The smell of all those dog treats was just too good, and he simply went for them. He jumped on to the bench, straight on to Lucy’s tummy, and starting wolfing down every treat he could see. He had some catching up to do.

Bouncer obviously decided that if Rascal was jumping up, he could too. He planted his hefty front paws right on to Lucy’s knees, ignoring her squeaks, and went on hoovering up the treats.

Lucy was giggling and gasping, “Get them off me! I’m squashed!” while Ellie and Christy tried to remove the dogs. But
Rascal wasn’t letting anyone catch him when there were still loads of his favourite treats everywhere. 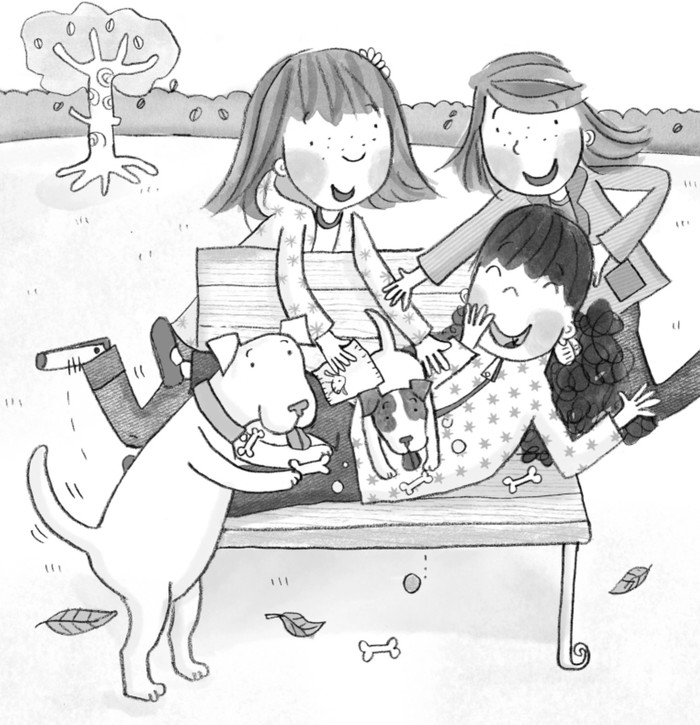 The Easter Egg Murder by Patricia Smith Wood
The First End by Victor Elmalih
A Kept Man by Kerry Connor
Demon Possession by Kiersten Fay
The Golden Gizmo by Jim Thompson
Tammy and Ringo by N.C. Reed
Doctor Crippen: The Infamous London Cellar Murder of 1910 by Connell, Nicholas
The Heart Heist by Kress, Alyssa
From Hide and Horn (A Floating Outfit Book Number 5) by J.T. Edson
An Instance of the Fingerpost by Iain Pears