The Tortoise and the Dare (4 page)

“But you can beat me by the length of two goats. Big Bacchiad will still win tomorrow,” Cypselis groaned. 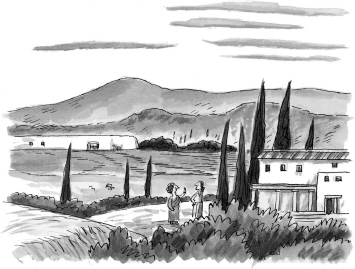 Cypselis stopped and looked at me in the half-dark to see if I was joking. “How?”

“If I refuse to race, he’ll claim you as the prize anyway,” my brother sighed. 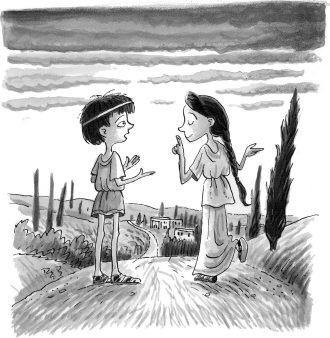 “
I
will race him,” I said simply. “We are twins. Tonight I will get Mother to take the shears to my hair and cut it as short as yours. No one will be able to tell us apart!”

“No,” I snapped. “I’ll be giving it up for my freedom. Now, let’s get home and start cutting.”

The school Olympics were set to start in the morning, before the day grew too hot. Every boy and master in the school was there as well as some of the boys’ fathers. 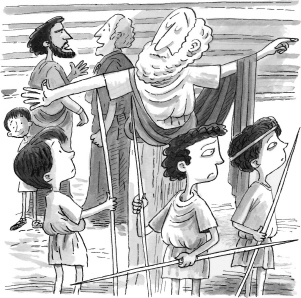 Some young men from the real Olympics were there. Their muscles were shiny and as hard as brass, and they strutted like cockerels to their seats by the finish line – the best seats. 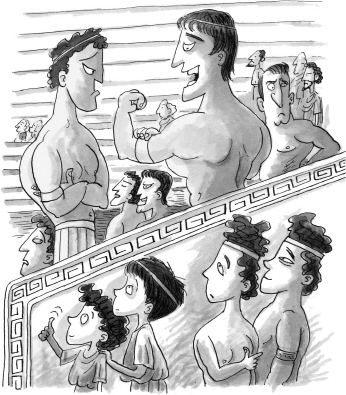 There were no women there, of course … I was dressed in Cypselis’s tunic and my short hair felt odd.

Big Bacchiad looked at me. “Hello, Cypselis,” he sneered. His fat face was bulging as he chewed on some leaves. I hadn’t eaten breakfast. We had no goat, no food. 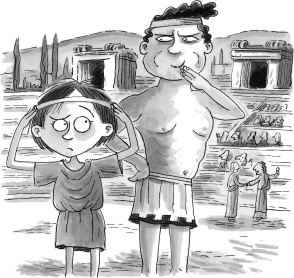 Big Bacchiad didn’t suspect a thing. My twin brother wore a hood so no one would see the switch and walked with me into the arena. “Watch out for him at the turn – he’ll try to barge you out wide.” 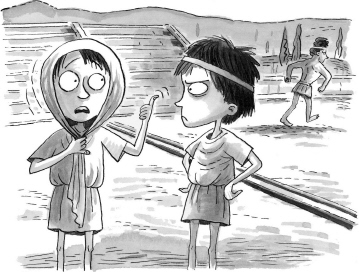 I kept my temper. “I know, Cypselis. I raced against him last night, remember. I’ll be watching out for it. Anyway, I may be ahead of him at the pillar and he won’t be able to elbow me.”

“The other boys may get in your way – some of them are very fast, but only Big Bacchiad can keep going the full distance.”

The head teacher, Master Sophos, marched onto the starters’ platform and clapped his hands. Everyone fell silent.

“Welcome to the school Olympics. Remember, these games must be played in the spirit of the real Olympics. The most important thing in the Olympic Games is not winning but taking part; the great thing is not winning but fighting well. Let us have no cheating, boys!” He nodded to the bronzed men in the stands. “Let us show our heroes that we too can be heroes! May the best man win!” 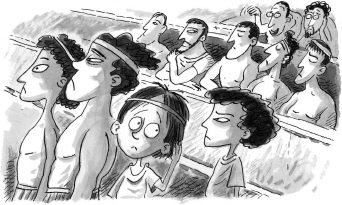 Or the best girl, I smirked.

The crowd cheered and the athletes began to sort themselves out into groups – the javelin throwers at one end of the track and the runners near the start. 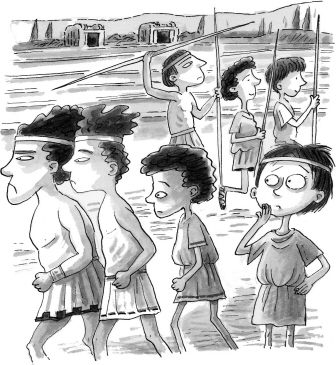 Master Sophus turned to us and smiled. “Now, boys, take off your clothes!”

The boys started to slip their tunics over their heads. 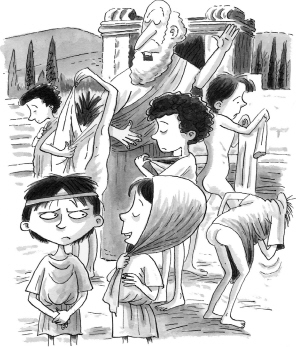 I turned to Cypselis. “Why are they taking their clothes off?”

“The Olympics are always run without clothes. Didn’t you know?”

“How
could
I know?” I hissed. “Girls aren’t allowed to watch the games, are they, you stupid,
stupid
boy!” 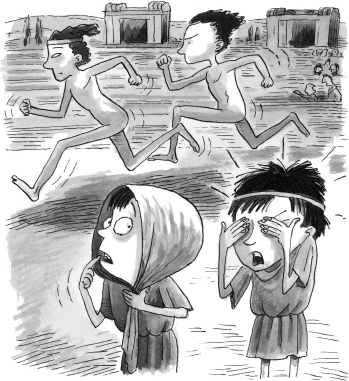 “They won’t let you run in a tunic,” my brother shrugged.