Read What We've Become (My Kind Of Country Book 2) Online

What We've Become (My Kind Of Country Book 2) 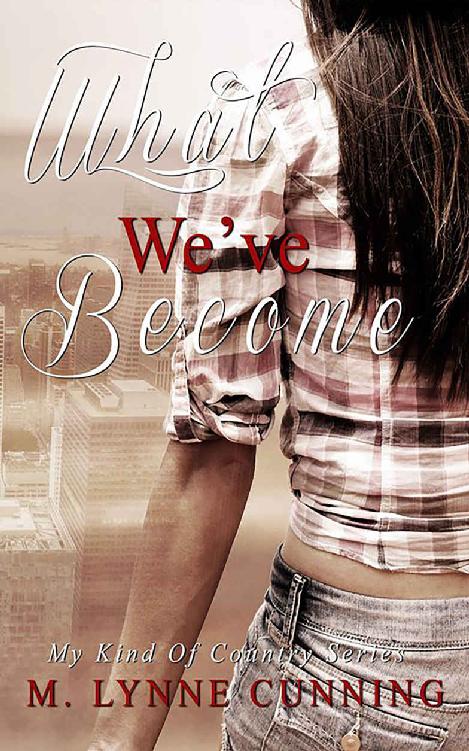 No part of this book may be reproduced, distributed, or transmitted in any form or by any means, including photocopying, scanning, or other electronic or mechanical methods, without the prior written permission of the publisher. Please do not partake in or encourage piracy of copyrighted works in violation of the author’s rights. Thank you for respecting this author’s hard work.

This is a work of fiction. All characters, names, places, and events portrayed in this novel are either products of the author’s imagination or are used fictitiously. Any resemblance to locales, events, or actual persons—living or dead—is purely coincidental.

This is a work of fiction. All characters, names, places, and events portrayed in this novel are either products of the author’s imagination or are used fictitiously. Any resemblance to locales, events, or actual persons—living or dead—is purely coincidental.

Thank you for purchasing
What We’ve Become
,

Again, we thank you for your purchase and we hope you enjoy the story!

Katie huffed in annoyance at hearing that phrase come from Jay. It was a phrase that meant so much, and yet, coming from him, she wanted nothing more than to ignore it.

“I have already told you, I can’t.” She had to admit, the idea of letting go sounded all too appealing. Letting go of her guilt. Letting go of her fear. That wasn’t what Jay meant, though. He wanted her to let go of the farm—her
dad’s
farm—and that just couldn’t happen. No matter how appealing the idea of not having to keep up two properties—two separate lives—might seem.

Things had changed in many ways since she had agreed to come to Nashville with Jay, but in other ways it was all still the same. Gone was the serenity and peace of the slow moving life she had been struggling to live out at the farm, replaced instead by city lights and an abundance of people. Most of those people were starry-eyed dreamers hoping and praying for their one chance to show Nashville that they could hack it in the country music world. Those people tended to move fast around her, leaving Katie’s mind whirling long after they had moved on. There were still many days though when she longed to be back on those porch steps with no sounds to keep her company, save for the slow shifting movements of the animals in the barn, and the singsong melodies of the crickets and cicadas.

That was no longer possible, though. As much as she had tried to maintain a balance between taking Mason to see Jay in Nashville and continuing to run at least part of the farm, she had quickly come to the conclusion that the notion was futile. It was impossible to run a farm on her own—even one as small as Rustic Acres—and Jay had absolutely no interest in aiding her in such a venture. She had no one else to turn to, and the thought made her feel even lonelier and more desolate.

It also made her miss Chad even more.

That’s why she couldn’t allow herself to think about it, about how it had all turned out. Chad was gone—back to his old life, she presumed—and the farm had suffered because of it, almost as much as she had.

The back and forth of trying to make Jay happy had resulted in downsizing her duties at the farm the only way she knew how. It had brought tears to her eyes to do it, but the end result included having to sell off most of the livestock. The horses had been sold quite easily, but the cows and pigs had proven easier to sell by having them butchered and sold as freezer packs, locally. Any crops she hadn’t been able to get harvested and sold at the local markets before the Canadian Thanksgiving weekend had been ruined by the frost that hit with a vengeance. The chickens had been sold as a flock to one of the farmer a few miles down the road. She had practically given them to him in return for his time spent watching over the farm during her sporadic absences. Mason had shed a few tears over that, and the sight of his sadness had caused her heart to clench with pure guilt. When she paired that with the emptiness of the farm, Katie couldn’t help but wonder if she had made a mistake.

It was too late to change her mind now. The farm was now sedentary and silent as a tomb, and her son was now confused and struggling through an adjustment phase, being dragged from one life—a life he had thrived in—to one he knew nothing about. Katie wished his excitement for the transition had lasted, but, in all honestly, if she wasn’t excited for their future in Nashville, how could she expect him to be?

Jay didn’t seem to notice that she and Mason were unsure as to how to begin their new life in the city with him. Instead, he had frivolously sold the condo in Canada, only advising Katie of the news after the fact. She’d been furious, but the reality was that, despite purchasing it together just before Mason was born, Jay’s name was the only one listed on the property deed. There was little she could do about the sale, and he knew it. He was obviously ready to take the bull by the horns and start over in Nashville with her and Mason by his side. She, however, was not yet that keen on the idea. However, with no condo to go back to—not that she would, anyway—and no crops or animals to look after at the farm, her reasons for jumping on a plane and flying back to the farm were becoming less and less believable. Jay had fought her on her plans to leave Nashville many times, but the only thing that allowed her solace was knowing that she could still use Mason’s schooling as an excuse. With the exception of the long Thanksgiving weekend in October, she and Mason had only been able to stay in Nashville with Jay for a weekend at a time, usually flying there through the night on Friday, staying with him Saturday, and then leaving again Sunday evening. Rarely, Katie would permit Mason to miss school on a Monday in order to stay a day longer, but that had only started to happen once she had sold the livestock and had nothing to return
home
for.

“You could stay longer than a few days at a time, Katie. But you would have to let it go.” Jay’s voice cut through her thoughts again.

“Jay, we’ve been through this. You know I can’t sell the farm.”

“Everything you need is right here. Mason and I are here.” Jay reached out to pull her closer to him, just as he always did when the repetitive conversation arose.

“Mason still has school to attend, Jay. You know that.”

“We could get the paperwork done to transfer him here. I have said that before.”

Katie exhaled slowly. She’d heard it all before. It seemed Jay had it all figured out in his mind, every detail planned out that was needed to create the perfect “happy family” he believed they could become. Katie couldn’t do it, though. She was far from ready. He might be prepared to forgive and forget, but that didn’t mean she had to be. Too much had transpired between them, and only a few months had passed since. A new beginning without the comfort of any kind of safety net was too much to fathom at this point.

“Mason is happy in his school, Jay. With his friends and his familiar surroundings. We will let him finish out his school year and see how it goes.” Katie held her hands on his arms, not allowing herself to be held any closer. She felt Jay stiffen slightly.

“You want to wait another six months or so to decide?”

“I told you, let’s just take this slowly. So much has—”

“You still don’t trust me.”

“But you
did
say you were going to try.”

It was Katie’s turn to become rigid. “I am. I wouldn’t be here if I wasn’t trying. I just need more time than you do, obviously. I’m sorry for that, but it’s the truth.”

“When are you going to forgive me for what happened between us?”

She didn’t want to say aloud that she wasn’t sure if she ever would. There was no use in creating more tension. “I’m not saying I haven’t. You’re putting words in my mouth again.”

Jay’s chest rose and fell against her as he exhaled in frustration. Silence ensued, and Katie knew that he was trying to get the conversation back on more solid ground. “I just want things to go back to the way they were. I’m sorry if I am being pushy.”

The way things were? Before he left her for another woman? Before her father died and left her with a sense of desperate loneliness she couldn’t shake? Or before she fell in love with someone else, only to have her heart broken again? Katie was not sure that things could ever go back to the way they were ever again. “I know you do,” was the only response she could muster.

“Someday, we
will
be okay again, Katie,” Jay crooned against her ear, wrapping his arms around her despite her halfhearted attempt to pull away. “Someday, we will look back on this time in our lives and laugh about it.”

The last thing Katie felt like doing was laughing, and she doubted she ever would. He may not think she had forgiven him yet, but she had—for the most part, anyway. She wouldn’t be capable of spending so much time in Nashville with him if she hadn’t. There was a difference between forgiving and forgetting, though. She did not forget.

“Time, Jay. Just let me get my bearings, okay?”

“That would happen a lot faster without that farm tying you elsewhere.” He held up his hands, denoting he meant no offence. Still, Katie scowled. “I am just stating a fact. I won’t mention it again,” he quipped, pretending to lock his mouth closed with an invisible key.

Right
, Katie thought.
Until the next time
.

“You just need to give me a chance, Katie. To make everything right again. So we can live here together, raise Mason together...get married like we were meant to do.”