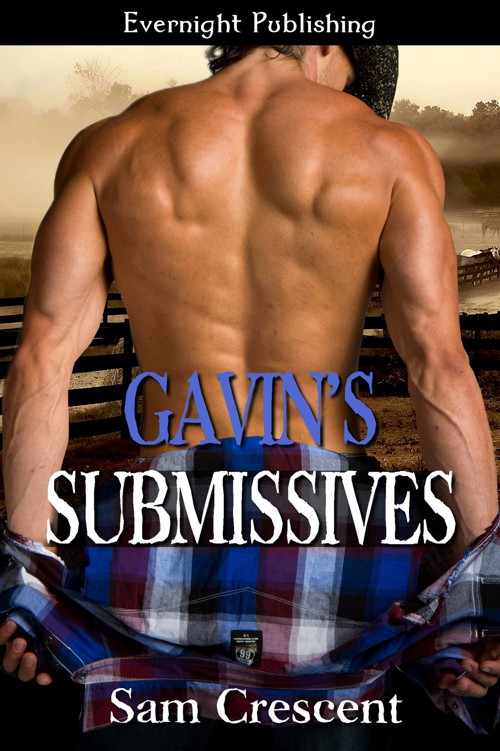 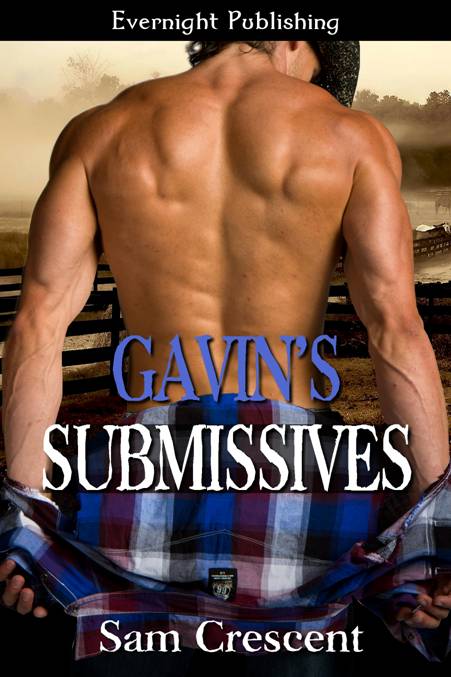 To my family, readers, and
Evernight
, without all of your support I wouldn't be able
to write these books. Thank you so much as I love all of you.

“She should be coming in later today. Her house isn’t ready
until Sunday, but I’ve said she can stay with us until she gets herself on her
feet,” Landon Hunt said.

Gavin Powell glanced across the dinner table at his lover
and business partner. They’d been friends for years. In the last five years
their friendship had turned to love. There was nowhere else he’d rather be than
with Landon. “Are you sure she’s going to be okay with us?” he asked.

He watched as his lover nodded. “She’s been through a pretty
rough
breakup
. Derek was a fucking bastard to her.
The divorce was final a week ago.”

“I don’t mean about that. I mean with us.” Gavin pointed
between them hoping Landon would understand what he was trying to say.

“She knows we’re a couple.”

“Do I need to take you over my knee?” Gavin asked. He knew
when Landon was purposefully avoiding the obvious.

“No, Sir.” Landon’s head bowed down in submission. Watching
the blond curls fall over the other man’s brow, Gavin felt an answering pulse
in his cock. He loved watching Landon’s submission. He’d trained Landon well,
and their relationship grew deeper every day. The trust between them was
important. Gavin refused to be a Dom to anyone without that vital piece of
trust.

“Now, answer my question. Does she know about us?” He asked
the question again waiting for an answer.

“No, she doesn’t. She remembers you from when she lived
here.”

“Do you think she’s a submissive? Answer that question
properly. There’s no room in this relationship for two
Doms
.”

Gavin watched as Landon licked his lips. The remembered feel
of those lips wrapped around his shaft swept through him. His feelings for this
man scared him. Never in all of his life had he been so connected to someone
else. Before Landon, his relationships were about mutual satisfaction in the
bedroom with little else to look forward to. Landon gave him everything he
craved, love, respect, and above everything else, submission. Gavin had been a
Dom for some time. Domination was part of his soul, and he couldn’t imagine
living without it.

“She’s a submissive. Her problem with Derek was the fact he
didn’t know what to do with her. He was a cruel bastard and should be shot for
the way he treated her.”

Gavin had seen pictures of Heidi, and part of him looked
forward to meeting her. They’d seen each other in passing when she’d lived in
Creek
Valley
.
The small town was a tourist attraction with the local waterfalls on the edge
of the town. Several ranches brought work to the area along with a mall. They
were a lucky town. There were so many small towns that weren’t so lucky.

Heidi had left
Creek
Valley
ten years ago when
her parents up and left to go to the city. Landon had kept in touch with the
young woman as they’d been good neighbouring friends even though there was a
five year age gap between them. Gavin was ten years older than Heidi and only five
years older than Landon. He was thirty-five and ready to settle down. Landon
was the man he wanted, and according to him, Heidi would be the perfect woman
to complement their life.

“We’ll meet her at the airport. I’ll leave the introductions
to you,” Gavin said. He picked up the morning paper and started to read about
the local events. Summer was in full swing, and there was always something to
look forward to. His summer looked pretty interesting. He’d reserve his opinion
of Heidi for when they met. His memory wasn’t what it used to be.

Landon finished his breakfast then went around the small
kitchen putting away their dishes. Gavin knew their relationship helped the
younger man to focus. Before he had come along, Landon had been lost and the
ranch he owned falling apart at the seams. His folks’ passing had sent the
younger man over the edge. He didn’t know what to do or how best to make it
work. With Gavin throwing all of his power at the younger man, Landon was able
to focus, and soon the ranch was a thriving business.

If it wasn’t for his own experience, Gavin would have felt
guilty for the way he’d taken over the running of the ranch. The property was
all in Landon’s name. Gavin wasn’t a gold-digger, and there was no way he’d let
the property go to anyone but his man.

When the kitchen was
spotless they made their way out of the house to check on the herd. Several of
their workers were already herding the cattle. The few horses they owned were
being groomed. Inhaling the fresh air, Gavin felt happy. Heidi was on her way
home. His lover hadn’t been able to rest from the moment she’d called to inform
him of the upcoming divorce. Landon was in love with the younger woman.
Jealousy struck Gavin in the chest. He’d known early in their relationship that
he wasn’t enough for Landon. A woman was necessary for their life to work.

Gavin loved the soft heat of a woman, but he’d truly
believed Landon was enough for him. Shrugging, he made his way out to the
fields. He loved working outside. He’d never be the type of man confined to a
desk sitting in front of a computer all day. Doing the books at night and
keeping the overall running of the Hunt Ranch was enough for him.

He hoped he and Heidi were enough to keep Landon stable. The
younger man was easily distracted. Keeping his submission had been a challenge.

Staring to where his man stood stroking a horse’s back, love
filled Gavin’s chest. He’d do everything to guarantee his happiness. The love
he felt for Landon startled him. He’d known from a young age about the
attraction he had for other men, but he also loved women. Having the best of
both worlds would be a dream come true. Being in a relationship with both a man
and woman would be a challenge. He looked forward to exploring both.

Heidi Larson rubbed her hands together. The late afternoon
sun no longer provided enough heat, and goose-bumps erupted along her arms. She
should have put something more suitable on. The thin summer dress she wore
didn’t hide the excess weight she’d gained since the divorce. Derek enjoyed
verbalising all of her faults.

“No wonder I
find other women. You’re too fat to fuck.”

She tucked stray strands of hair behind her ear, wishing she
could forget all the cruel words he used to say to her. Her weight was always a
problem. Heidi lost cost of the number of diets she’d been on in the past five
years.

Picking up her bag, she moved toward the selection of seats
in the far corner. She stayed near the window in the hope of spotting Landon.
He’d promised to pick her up. The few possessions she owned were in her one
suitcase. Derek took everything with him when he moved his woman into their
apartment. She didn’t mind. The apartment had never lost the bachelor feel to it.

Why did you
marry the bastard?

For the last three years she’d been married, she’d asked
herself on a daily basis why she put up with his shit. She hated him, or at
least she’d come to hate him in the last year. When they first got married
everything was perfect, but he’d quickly turned nasty.

The weight gain couldn’t be stopped. Instead of starving
herself
when the nasty comments came out, she went straight
for the chocolate and cream.

Pressing a finger into her fleshy stomach, Heidi tried to
suck her tummy in. Shaking her head, she stared out of the window.

Rubbing her arms she tried to stop the chill from bothering
her. Derek never bought her a sweater in all the winters they’d been together.
He didn’t see the need to spend money when she was large enough to keep the
heat inside her body.

Tears filled her eyes as she recalled the spiteful things he
used to say to her.