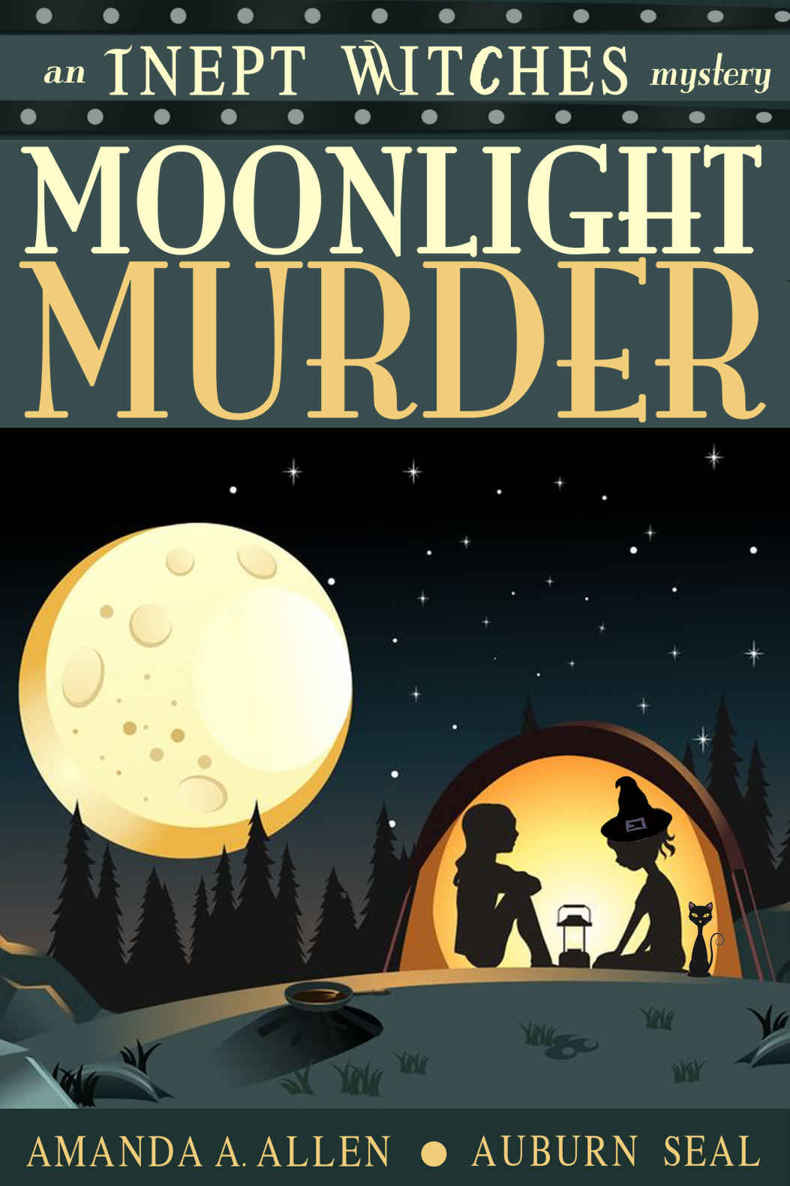 Chapter 1: Into the Woods

Chapter 2: Out of the Frying Pan

Chapter 3: Into the Fire

Chapter 6: A Shot of Truth

Chapter 12: A Blaze of Glory

More Titles from Auburn and Amanda

The Immortals: A Vampire Fairytale

The Destruction of Prince Xavier

This book is dedicated to that Jezebel, Auburn Seal.

Her flavor of crazy is the same as my own.

And that, my friends, is its own kind of excellence.

Amanda brings an optimism to our projects

that is both endearing and totally unrealistic.

Which is of course why I love her.

“Shut up. We’re not lost.” Ingrid said. They were so lost. In the woods. Again. For the love! They’d nearly, almost been murdered in the woods the last time they ventured in. What had possessed them to enter again?

The moon shone bright overhead, but it was hard to tell under the thick canopy of the evergreen pine trees. The path was covered in shadows so thick they could have been in a cave, and there were noises. Completely unidentifiable noises that could be bears.

“I hate you,” Ingrid replied. She scowled dark looks at her best dove, Emily, but the wench wasn’t even noticing. “If this weren’t for you bargaining with Aunt Hazel, I would not be going to this…this…boob fest.”

“I gave Aunt Hazel my solemn promise we would participate in whatever this is supposed to be,” Emily said with a goody-two-shoes voice.

It was dark. Too dark. And too silent. Except for the creepy noises that hinted at murder. It was on nights like these that you were supposed to be curled up with a warm, lickable sheriff in your own bed with things like walls. And a roof. To protect you from the outside where the raccoons lived. They were so lost they should have packed in a tent and planned for the long haul.

She shuffled slowly forward. The moon was bright. The sky was clear. It was a perfect night for a witch deal. If you were into that sort of thing, but Ingrid was into not being in the woods.

“These shoes are going to be ruined,” Ingrid complained, hearing the whine in her voice and deciding to amp it up. “So ruined. I barely got to wear them in St. Maarten’s. I probably paid whatever it is when you buy a lot of stuff in another country. So, they’re extra good.”

“Did you hear something?” Emily asked.

Ingrid gasped and tripped. She clutched the wine bottle close, saving it from being destroyed by the fall. If they had to get naked with a bunch of old lady witches from the island, they were going to do so properly.

As soon as the rush of adrenaline to protect the wine faded, she realized that she was sitting, drunk, in the dark in the woods without panties. Possibly they’d already had a bottle of their vacation wine. Possibly that was why they couldn’t find the witch hoo-hah.

“Did I just see your butt,” Emily asked as she hauled Ingrid to her feet.

“Maybe,” Ingrid said, clutching the wine close, looking over her shoulder. There had been a noise. Why were there noises?

It took Ingrid a second to remember what Emily was talking about. “I left my panties last time. Somewhere in the woods is a little cross-dressing raccoon with my panties!”

“You have to hunt up that raccoon. You have to get Hazel to do a location spell for you, and then you have to find it and kill it. Dead. Shovel it. Shovel it hard.”

“Killlll it,” Emily moaned. “Killll it before it tracks you down by scent and eats your face.”

“I will go no farther,” Ingrid shouted. “I am done. I have splinters in my butt. I have a near miss on my wine. We could only bring seventeen of these home, and we drank one tonight already. This is number eleven. Eleven.”

Emily was laughing too hard for Ingrid to bother to continue.

“Wine,” Emily agreed. “Let’s just do it here. We’re in the woods. We’ll do this ritual, whatever it is, and then we’ll leave and tell Hazel we tried, and she won’t even be able to detect a lie cause we totally did.”

“And then wine?” Ingrid made a sad face, but she was kind of serious. Why couldn’t they at least do this in a back yard? Why did these crazy witches make them find obscure locations in the woods? Do the witches want them to die? Hazel had a nice yard. If the coven cut out the dead weight like Ingrid and Emily, they wouldn’t even be crowded. Or Autumn. They should definitely get rid of Autumn.

Ingrid stumbled when her phone buzzed in her bra. She’d forgotten she put it in there, and it scared the crap out of her.

Emily laughed at Ingrid’s gasp and grabbed the wine before she dropped it.

“What?” Emily demanded, watching Ingrid dig in her bra with a quizzical expression.

Ingrid pulled out her phone and found another text from one of her college boyfriends.

“Sheldon again! He’s still sending me naughty texts. I’ve been ignoring them. Obviously. But I haven’t mentioned it to Gabe. I sort of feel guilty for that. I was hoping Sheldon would just stop. Persistent little pervert.” She sighed. “I’m going to have to tell Gabe. That is going to be awkward and also he’ll probably give me the guilt eyes. The ones that say ‘Ingrid, why didn’t you just tell me from the beginning?’ And then I’ll feel bad about that even though I don’t want to..”

“Oooh,” Emily answered before tilting her head to consider. “Finger guy. You would think after losing control of your magic and hurting him, he wouldn’t try to look you up again later. Do you think he…manned up?”

“No! He’s a whiner. He whined a lot about his stupid finger. Also, shut up. He totally wouldn’t have gotten hurt if he hadn’t… ”

“What did he do again? Knock on your door when you were sleeping?” Emily was already laughing. She set the wine down to lean against the tree and cackle.

“You sound like a fool. And a mean, evil dove. And he came into my room while I was sleeping and got into bed with me. I freaked out. I was having a bad dream.”

“Oh yeah. Hadn’t we just watched all those monster movies? Speaking of someone who should have been shoveled, getting into bed with a sleeping college girl is shovel worthy.”

“He touched me when I was dreaming about Freddie Krueger. He got what was coming to him.” Leaning against an opposite tree, Ingrid crossed her arms over her chest at the memory. Sheldon losing his finger had been unfortunate. She must have just gotten phone service because a whole slew of texts from him came pouring in. There was one, very unwanted, picture. She was going to keep removing parts if he didn’t get a clue. “Sigh, my best dove, sigh. He’s coming to the island. He wants to have coffee.”

Emily nodded. “He shouldn’t have come into your room. Over the line. You should know coffee is code for sex. But if you have lunch with him, I insist on being there. To protect your virtue. And to see you remove another finger. Why can’t that be my magic ability? I would remove so many fingers.”

“And,” Ingrid said firmly, “his missing finger is a good reminder to not creep in on people. He should use it as a reminder to leave me alone. Coffee is not code for sex and my bed is otherwise occupied.”

“A warning to all potential creeper victims. He dumped you right?”

Ingrid nodded, making a face. “I mean, it wasn’t the first time I’d been dumped. But I was going to be the one who dumped him, and he beat me to it. Now he thinks he can just come here and what? Hook up again? Make me feel sorry about his missing digit and lack of piano abilities or other such things and then get into my pants?”

“Jerk,” Emily said, pushing away from the tree. She assumed a serious expression that was utterly foreign to her normal one. “I told you that you should have shoveled him. Or punched him in the throat. Or…magically removed his thumb.”

Ingrid stared at Emily and then snickered.

“Shut up,” Emily said. She stretched her neck, held out her hands, and then sighed.

“You don’t know how to start this ritual!” Ingrid laughed. She took the bottle of wine, struggled with the cork, and then finally it popped free. “That is hard, even with magic.”

Emily frowned and then closed her eyes. “Oh—spirits…”

Without opening her eyes, Emily said, “I will beat you to death with your own wine bottle and then finish the wine.”

“Gross, you should drink the wine first.”

Emily hummed and then snapped, “Close your eyes, focus on your magic, think happy thoughts.”

Ingrid closed her eyes, knowing that getting back to her lickable sheriff would be faster if she’d just comply. He was probably there. Sleeping in her bed. All perfect and warm and snuggly. She focused on the well of her magic and thought about Gabe. He was tall, he had lovely broad shoulders, and coming back from St. Maarten’s to him had been legitimately exciting. He was rugged and strong. She hadn’t felt like this with anyone…except Harrison.

At the thought of her dead husband, Ingrid’s power surged and the ground exploded around them.

“That tree is on fire and you just blew a hole in the ground,” Emily said, cocking her head to examine it. Honestly, it wasn’t the first time that Ingrid had set something on fire, but maybe the first time she’d started terraforming. So, this was sort of par for the course for the two of them. For all of Emily’s threats of violence, it seemed to be Ingrid who actually hurt people. Accidentally or not.

“Shut up,” Ingrid yelled, batting at her hair to ensure she wasn’t aflame. She backed up to get away from the fire and tripped again. “Damn it. Ouch. Ouch. This tree is squishy.”

Emily scoffed, “If it’s squishy, it’s not a tree.”

“But there’s sap,” Ingrid said, rolling over to push to her feet and realizing that the branch she was holding onto was a somewhat warm hand and it was not attached to a body. “Oh no.”

“Stop lying, you faker. I will beat you up. Just a little bit, since I love you.”

“Well, damn it,” Emily said calmly. “You have blood on you and you got it on me, and now we have to get rid of the body.”

The Interpreter by Diego Marani, Judith Landry
Cajun Gothic (Blood Haven) by Rawlyns, Nya
The Band That Played On by Steve Turner
Craggy 2: Another Last Flight for Craggy by Gary Weston
Ring by Koji Suzuki
Bella Notte by Jesse Kimmel-Freeman
The Unmaking (The Rayne Whitmore Series Book 1) by Alanna Faison
The Tinder Box by Minette Walters
Quest for the Sun by V M Jones
Prayers for the Dead by Faye Kellerman