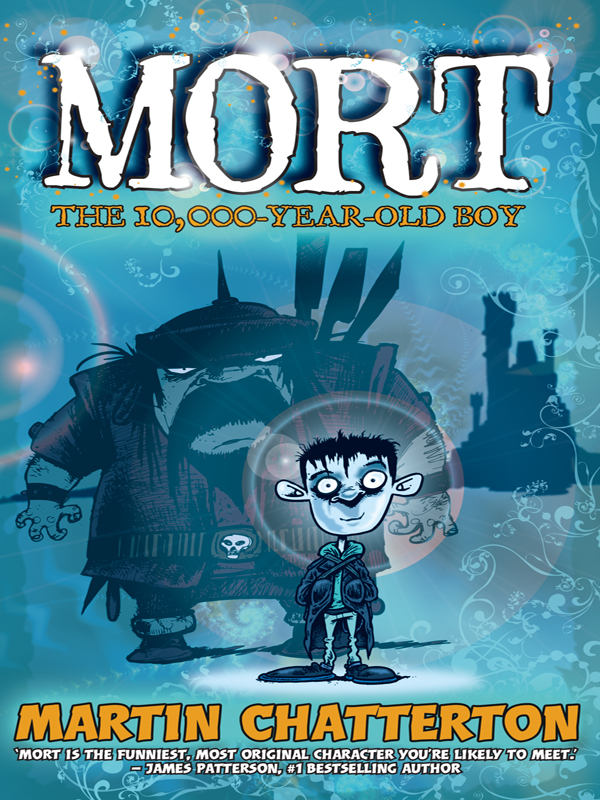 Time flies when you're having fun, even if you're Mortimer DeVere, the 10,000-year-old boy. When unwelcome visitors arrive on spooky Unk Island, Mort and his sister Agnetha are plunged headlong into a dangerous race against time, tigers and the terrifying Trish. And, as their strange, secret collection of historical creatures begins to turn against them, the DeVere children discover that today may soon become the weirdest and wildest 24 hours of their very long lives! 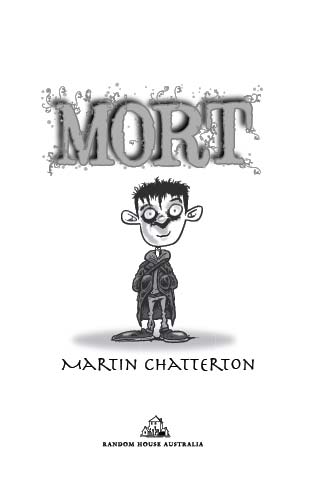 A word from the author

Since Mort contains a few real-life historical figures, we've put a handy guide at the back of the book for those of you too lazy to use Google. 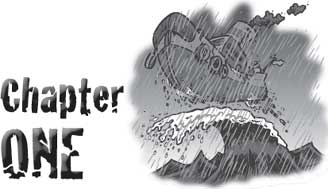 Unk Island is not a place that gets many visitors. Shaped like a broken coffin, it squats at the very back end of nowhere, and is said by those who have seen it to be the ugliest lump of land to be found in all the seven seas. On days like today, cloud-hung and rain-lashed, it was about as welcoming as a bucket of rotten fish guts.

Yet, vile as the island might appear, six nautical miles away a ship was heading in its direction through the slab-like waves of an ink-black sea.

Someone, it seemed, wanted to be there.

At an almost impossible angle, the ancient Unk ferry wheezed painfully up the sheer cliff face of a mountainous wave before teetering on the crest and then plunging like a runaway rollercoaster back down, down, down into the gloomy depths, to start the whole terrifying process all over again. Nigel Spalding, his stomach jostling for space somewhere near his ears, clung to his seat, his fingernails digging into the varnished wood. 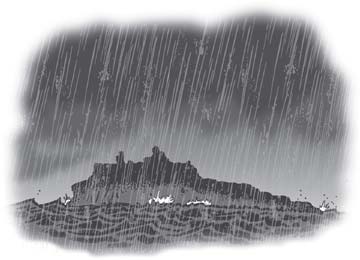 He'd already checked the position of the lifeboats, memorised the instructions for using the lifebelts, and sent a tearful âgoodbye' to his mother via text message. There was nothing he could do now except hang on and pray. He hadn't known before this ferry trip that he actually believed in God, but he was in no doubt now. A fresh blast of icy rain smashed against the glass of the ferry lounge window and, as the boat juddered and bucked under Nigel's clenched buttocks, he squealed for the hundredth time.

It was surely, he calculated, only a matter of seconds before they sank to a cold and watery grave.

His pupils like pin marks against the white of his eyes, Nigel glanced at his boss to see how she was dealing with this voyage into hell.

âYou know, I had heard this ferry crossing could be quite rough,' said Ms Patricia Molyneux, glancing up from her laptop, âbut
it looks like we've got off lightly, eh Nige?' 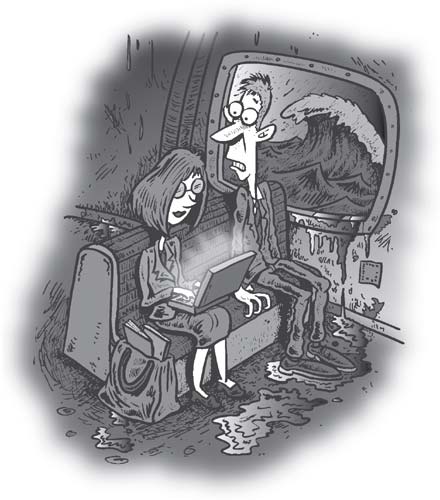 Nigel stared at Trish. A slim, neatly dressed woman of around thirty, she sat comfortably
upright, her computer balanced on her knees, a slight frown on her pleasant, if slightly forgettable face.

âLost the wi-fi connection though,' she said, tapping a red nail against the laptop's steel casing. âDamn. I was hoping to finish that “Tracking Truancy” presentation on the way over. Oh well, I'll just have to do something else.' Trish shut the laptop with a crisp âsnik' and placed it back inside its sleek protective case. She took out some paperwork and began making notes in the margins.

She'd gone completely mad, that was it, thought Nigel. The sheer terror of the ferry crossing had pushed her over the edge. It was the only explanation. Nigel forced his face back to the window and was confronted with a vast wall of water rearing up above the ferry as if it were an angry sea monster.

âMummy,' whimpered Nigel, and puked his morning muesli all over his knees. 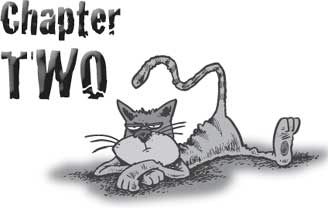 Bright yellow light spilled up from the hatchway, sending shadows dancing across the
granite roof. Dozens of wires and tubes ran back and forth from the electronic equipment, which bleeped and winked softly as if the machine they surrounded was a patient in a hospital bed. A ginger cat coiled on top of a filing cabinet watched with eyes half-closed.

Three men were leaning over the opening and one of them, a white-bearded man dressed in a long flowing robe, placed a tool on the outstretched palm. Spanner and hand shot back inside and a series of clangs echoed around the lab.

âHe needs to be careful, da Vinci,' said a tall, gloomy man in spectacles, his arms folded across his thin chest. âHe's working close to
Retro
's reactor core there.' 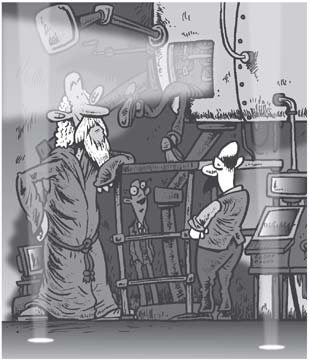 âI'm just saying he should be careful, that's all. That's a fusion reactor, H.G. You know
what could happen if that went off? No, of course you don't. How could you?'

H.G. Wells stroked his bushy moustache and went bright red. He was about to give Oppenheimer a piece of his mind when there was a large bang from inside the machine. Oppenheimer leapt in the air and clutched his heart.

Mort popped back into view and wiped the sweat from his brow. He handed the jack spanner to da Vinci.

âThere, that should do it. A few whacks with the spanner works every time.'

Mortimer DeVere clambered down the steps and brushed some dust from his sleeves. Apart from a few dark circles under his glittering eyes, he looked exactly like any other ten-year-old boy, which was very strange indeed because he was not, in fact, ten years old.

Mortimer Montmorency DeVere had been alive for a shade over ten thousand
years. Thanks to a little hiccup in the DeVere family's DNA, for every year a human being aged, the DeVeres, and the few âfrevers' like them, took a thousand. It was something to do with eating pine cones apparently, but Mort had long forgotten exactly why. The family had been on Unk Island ever since Mort's father had beaten Julius Caesar in an arm-wrestling match. He'd been a very sore loser and the DeVeres thought it might be wise to relocate for a time; at least until the Roman Empire collapsed. Mort's mother had been thinking about heading back to Italy but the isolation of Unk was a powerful argument for staying put. On Unk, no-one poked their noses into things that were none of their business. 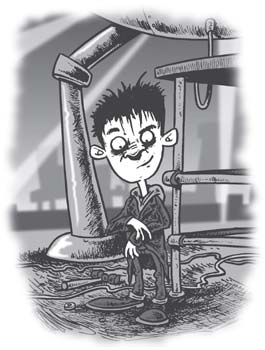 Bobby Oppenheimer wandered over to
the long window at the western edge of the laboratory. Great sliding glass doors opened out halfway down a sheer cliff face, hidden by two natural ledges of rock, one above and one below. The glass doors allowed the dull grey light in but, thanks to a layer of crystal sandwiched between the glass, no light could be seen from the outside. Oppenheimer squinted into the sky, his face a mask of perfect misery.

âHard to tell if we'll get the full effect of the eclipse,' he said, his voice tolling like a funeral bell. âAnd Leo says the flux capacitor won't work without proper planetary alignment. Might be safer to postpone.'

âIf we don't go today, we don't go for 82 years,' said da Vinci, his head bent over an unrolled chart spread across a lab bench. âNext eclipse like this is 82 years away.'

âI don't want to wait 82 years!' spluttered H.G. Wells. âWe've been working on this for more than a hundred already!'

âMore like two hundred,' said da Vinci, âfor some of us.'

He looked up at
Retro
, standing like a spider on three legs. He'd started the project not long after his parents had left on their latest holiday, sometime around 1803. Mort had calculated â going on past experience â that he had a good hundred years before they came back to Festering Hall.

Piece by piece Mort had assembled his team, each of them a perfect cloned copy, like some sort of human jigsaw. The cloning, or copying as the DeVere family preferred to call it, was a hobby. Mort and his sister Agnetha's hobby, to be exact. The copied clones never aged and, thanks to some ingenious microchip implanting, usually accepted their life on Unk as normal.

Apart from his research team for the
Retro
project â Leonardo da Vinci, Bobby
Oppenheimer and H.G. Wells â Mort's collection was a little on the wild side. He had a Vlad the Impaler, a Boudicea, a Nero and two Napoleons (the duplicate was caused by a heavy finger on the wrong button during the copying progress).

His sister mostly collected writers. Agnetha had a Chaucer, a Dickens, a Shakespeare, and her eye was on J.K. Rowling. She followed Rowling around from time to time, just waitingÂ â¦

Their collections helped pass the time. With such a long life, boredom was a constant threat. Many days had stretched out in front of Mort, dry, dusty and dull.

But not this one.

If everything went to plan, if the flux capacitor worked properly, if the eclipse happened as predicted this afternoon, if
Retro
performed as planned, then today might be the very best day in Mort's long, long life.

Mort clapped his hands. âGentlemen,' he
said, pressing a key on one of his gleaming computers, âlet's go over the procedure once more. I'm declaring
Retro
a go project as of now.' A countdown clock glowed green on the screen and Mort beamed. âFour and a half hours to launch!'

Home is the Heart by JM Gryffyn
The Laws of Evening: Stories by Mary Yukari Waters
Dead Man's Switch by Sigmund Brouwer
Vendetta by Susan Napier
Sky of Stone by Homer Hickam
The Word of a Liar by Beauchamp, Sally
The Mark of Athena (The Heroes of Olympus, Book Three) by Riordan, Rick
The Mask of Atreus by A. J. Hartley
Stalker's Luck (Solitude Saga Book 1) by Strange, Chris
Alpha Sin (mind control erotica) by Nicolette Allain