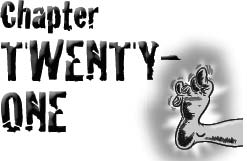 Trish was wriggling so much that Nigel was developing a painful rash between the shoulder blades. She hadn't stopped since Khan had closed the door to the storage cupboard.

What on earth was she doing?

Nigel would have asked her but with Khan's filthy rag stuffed in his mouth, that was impossible. In fact Khan had tied them up so tightly that the only way to get free would be if one of them could bend their leg over their shoulder and untie the ropes using their toes.

Trish bent her leg back over her shoulder and untied the ropes using her toes. With his hands free, Nigel pulled the rag from his mouth.

Trish stood up and straightened her skirt. She picked up her shoe and put it back on.

Nigel shook his head. He was beginning to think Trish was an android.

Trish opened the door and looked out carefully. The ballroom appeared to be empty. She stepped inside, her gaze stopping at the open hatchway.

âThat's odd,' she said, moving towards the opening to the ventilation shaft, Nigel close behind.

âLook,' she said, pointing at two objects lying just inside the open hatchway.

She leaned inside and picked them up. As she did so, a familiar roar came echoing up
the tunnel towards them. 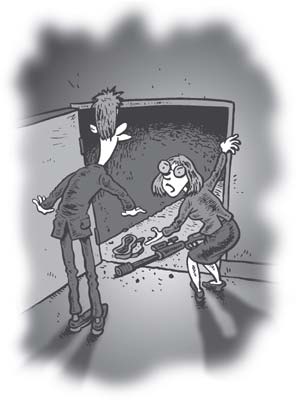 Nigel, his face sheet-white, made a sound like a baby seal looking for its mother.

As Smiler roared once more, filling Nigel's head with images of curving fangs and razor claws, his jelly legs buckled from under him. He slumped to the ballroom floor like a dropped sock, hitting the boards with a dull thud. At exactly the same time, all the lights went off, and everything went black. 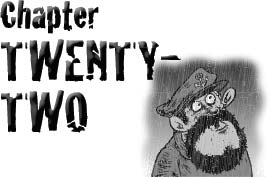 âI'm not hangin' around long, skip. Not with this blasted eclipse comin' on.'

âNo-one's asking you to, Roy. Just tie us up and we'll give them another two minutes, no more.'

The skipper of the Unk ferry checked his watch: 4.08 pm and the skies already close to black. The boat bumped against the Unk Island jetty, its engines churning against a sea as grim as the captain's thoughts.

Captain Burns was anxious not to be there any longer than absolutely necessary. He'd
already waited twenty minutes longer on this blasted island than he felt comfortable with.

Everyone had heard the rumours about Unk.

If you were a local you couldn't avoid growing up hearing stories. And as well as hearing them, you quickly learned not to ask too many questions about the mysterious DeVere family, not to poke your nose in where it wasn't wanted. Noses that did poke their way in had a habit of being pushed right back out again.

The only certainty was that, despite the DeVeres owning almost all the land in Unk Shire, hardly anyone on the mainland ever saw anyone from the island. His grandfather had once told the captain some nonsense about some sort of human zoo on the island, and there had been rumours about the DeVeres being witches, but Burns had dismissed it all as idle village chat.

All the captain knew for sure was that
Unk Island was a damned spooky place to be in the dark. 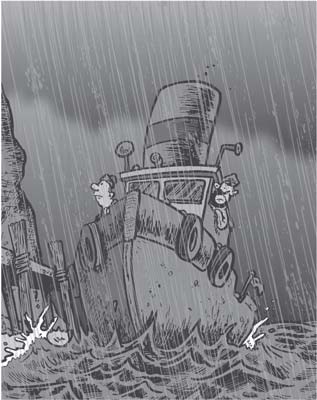 He gave an impatient toot on the ferry horn, but wasn't hopeful. The education woman and her assistant would have been here by now if they were coming back tonight.

âWhere do you think they are?' said Roy, his eyes scanning the cliffs. Captain Burns could hear the trace of panic in Roy's voice and hoped his own didn't sound as nervy.

âHow would I know?' he snapped. He looked at his watch once again and frowned at Roy as if he was to blame. âNow cast off! Those two will have to take their chances!'

Then, as Roy gratefully lifted the rope from the dockside davit, they heard it: a sound like nothing either man had ever heard before and one which they were very sure they never wanted to hear again.

âWhat was that?' Roy squeaked.

Then, before Roy could suggest anything so stupid as going to look for the missing passengers, Captain Burns thrust the engine levers forward and the ferry surged into the open water. 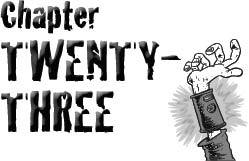 Mort couldn't believe how difficult today was turning out to be.

He'd been halfway to the lab with the eclipse closing in when he'd got the call from Sir David. Mort swung the buggy one hundred and eighty degrees and headed for the ballroom.

As he drove he checked his wrist monitor.

Sir David â or his dot â was inside the ventilation shaft leading to the ballroom. Mort looked closely at the display screen and frowned. Unless he was mistaken, so was Smiler.

What on earth was Sir David doing?

Mort could only guess that Sir David had found the sabre-tooth and, for reasons known only to Sir David, was now bringing Smiler's collar back to Festering via the ventilation shaft.

A minute later Mort arrived at the ballroom. He could hear voices coming from inside. Slowly Mort pushed open the door.

There, about twenty metres from where he was standing, were the two unwelcome visitors. Both of them were standing looking in at the ventilation shaft. Mort saw the woman reach inside the shaft and pick up an object.

Mort walked slowly towards them, trying to decide how to handle the situation. Perhaps he could pretend to be someone else? Whatever the story was it was about time he got this sorted out one way or another.

He had reached a spot about ten metres away when two things happened at almost exactly the same time.

First, and to Mort's complete surprise, he heard an almighty roar from the clearly not-dead Smiler from somewhere in the ventilation shaft. The man who had been peering into the shaft stepped backwards and fainted.

Second â and this was almost as surprising as hearing the sabre-tooth come back from the dead â all the lights went out.

Mort wasted no time wondering why Smiler wasn't still lying out on the island. Instead he selected the most powerful setting on his wrist monitor âstun' control and began slowly and silently backing towards the door.

It had been a shock hearing the beast but not as big as the one he would give the sabre-tooth if he came into the ballroom. Mort knew from the wrist monitor that Smiler still had his collar firmly in place. A full blast should do the trick but Mort knew he'd have to get it right first time. Smiler was a tough enough proposition normally, but wounded, he would be twice as dangerous.

Mort steadied his finger over the controls.

Then, from the darkness ahead, Smiler let out a howl and flew out of the ventilation shaft, clear over the heads of Trish and the prone Nigel.

Of course, in the darkness, Mort had no way of knowing this. All he knew was that he was in the ballroom with a sabre-toothed tiger with a grudge. 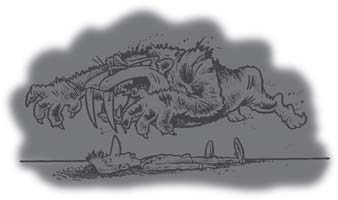 A long time ago Mort had spent eight years studying at the Shaolin Monastery overlooking Kathmandu. The experience had
left him with some very useful skills, one of them being the ability to âfeel' an attacker coming towards you. He could hear Smiler padding around the ballroom, before stopping.

In the nick of time Mort sensed Smiler coming at him. He dived hard to his left, his shoulder slamming painfully into the wall of the ballroom.

He only just made it.

With another roar loud enough to wake the dead, Smiler pounced again but found only empty space. Mort, his shoulder throbbing from the impact with the wall, staggered back into the centre of the ballroom. He slipped on the shiny wooden floor under his boots and fell sideways â something which probably saved his life â just as Smiler flew over his head, his trailing leg catching Mort on the back and sending him flying clear across the room.

Even as he was cartwheeling through the air, Mort was estimating the sabre-tooth's
position. He twisted his body and sprang to his feet. The second his toes touched the floor he flexed his knees and bounced upwards as Smiler attacked again. Using all his Shaolin expertise, Mort hung in the air for as long as he could. Feeling the beast pass under him, Mort stabbed a finger down onto his wristband. If the thing was operational, that jolt should have sent Smiler to sleep.

The power outage must be preventing the radio signal that the device needed to function.

Mort landed once more, this time twisting and rolling sideways until he was wedged into the angle where the ballroom wall met the floor. It made him a less conspicuous target.

Smiler paced the room, growling. Mort became aware that, like himself, the Molyneux woman was trying very hard not to breathe. And then, quite suddenly, the man with her woke up. 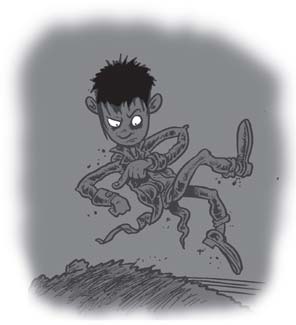 âShh!' hissed Trish, clamping her hand over Nigel's mouth, but it was too late.

Mort sensed Smiler moving in the
darkness. He didn't know exactly how sensitive Smiler's sense of smell was, but he did know it was better than his own. There was also nothing wrong with his hearing, so Mort, with nothing he could do to disguise his smell, lay as quietly as possibly.

Smiler moved in the direction of the sounds. He knew fear when he heard it.

Smiler moved in on Trish and Nigel.

Darklands by Nancy Holzner
A Woman of the Inner Sea by Thomas Keneally
Dragonriders of Pern 6 - Dragondrums by Anne McCaffrey
Crime & Punishment by V.R. Dunlap
Bradbury, Ray - SSC 07 by Twice Twenty-two (v2.1)
Legend upon the Cane by ketihrees
The Love Laws by Larson, Tamara
Late Nights by Marie Rochelle
The A Circuit 04- Rein It In by Georgina Bloomberg
Charlotte Cuts It Out by Kelly Barson