With the power out and wearing the night-vision goggles, Khan moved through the darkened corridors of Festering easily and with two very clear ideas in his head.

First, he was going to teach that little Mortimer snot a thing or two.

And second, he was going to get off this damned island if it was the last thing he did.

The beauty of Khan's plan as he saw it was that he could do both things at the same time. There was an ancient Mongolian proverb that said that you can kill two birds with one stone
but if you have a great big rocket launcher you can kill a lot more.

Actually, there wasn't any such Mongolian proverb but Khan felt there should be. Once he was back in charge of the world he'd make sure that it became a proverb.

But before that could happen he needed to get off this blasted island.

Khan knew that he had little chance with the ferry unless he forced the sailors to take him to the mainland. One glimpse of Khan at the jetty and he knew the ferry would be off to sea before he could get near. He could, of course, hide and jump aboard, but Khan knew the effect his appearance had on some people. For all he knew, the ferry crew would drop dead with fright and then where would he be? Khan wasn't a sailor and the seas around Unk had claimed its fair share of ships.

Besides, even if he did take the ferry, he had no doubt that the DeVeres would have some sort of system in place to stop any of their
collection escaping in that way. An automatic missile system, maybe. Khan wouldn't have been surprised.

No, what Khan needed was something faster than the ferry. Something that would take him where he wanted to go instantly. Something new.

From what little Khan knew,
Retro
would be able to transport him out of Unk instantly. And since the machine was Mortimer DeVere's absolute pride and joy, the threat of him taking it would be enough to bring him straight to Khan.

Khan reached the laboratory inside eight minutes, only slightly longer than it would have taken with the lights on.

When he got there he paused and listened for a moment before sliding it open. With the power out, the electronic locking mechanism was useless.

A dim light was coming from somewhere up ahead. It flared in Khan's goggles and he lifted them onto his forehead. As Khan's eyes adjusted, he moved slowly into the laboratory. Towards the centre of the lab three figures were huddled around a candle. Their shadows, made huge by the tiny flame, flickered across the complicated equipment as the men talked in low voices. To Khan it sounded like they were arguing about something.

Khan coughed and they turned round.

âGentlemens,' said Khan. He lifted the rocket launcher from his back and pointed it at them. All three raised their hands.

âThere's no need for that,' said Oppenheimer. âWhat are we going to do, fight you?'

Leonardo nodded. âWe are men of science, Khan.' He glanced at H.G. Wells. âAnd he's a writer.' Leonardo spoke the last word in the same way you might say âcockroach'.

Wells pursed his lips and shot a dark look at Leonardo.

âThank you, Leo,' he said, looking Khan directly in the eye. âNow look here, old chap, Oppy's right. There's no need to be waving that thing around, is there? I'm sure we can come to some sort of gentlemanly â¦'

Khan lifted the rocket launcher and squeezed the trigger. The window at the end of the laboratory exploded in a ball of orange flame and glass. 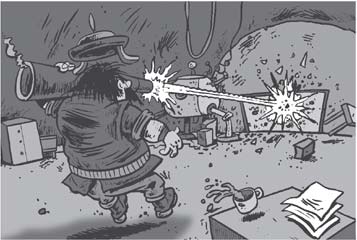 âYou finish?' Khan said. He pointed the rocket launcher at Mort's machine. âI have your attentions?'

Leonardo jumped between the rocket launcher and the machine. â
Per favore
, not the machine.'

âAh, I'm not sure you know exactly what this machine does, Mr Khan,' said Wells.

Leonardo laughed. âThis machine is not a taxi, Khan!' Leonardo cried. âYou can't just ask it to take you home!'

Khan swore loudly â in Mongolian â which was just as well because it was the worst swear
word ever invented. 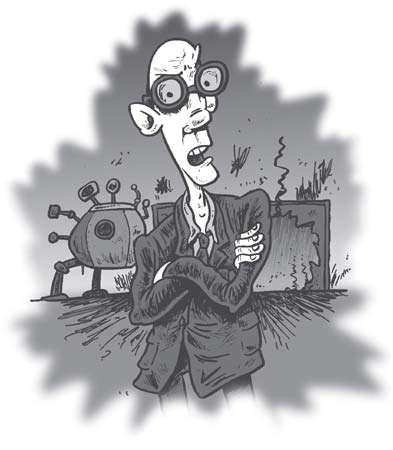 âYou lie!' he shouted. He pointed the rocket at the machine. âThis machine is travel machine!'

âYes, Mr Khan,' said Oppenheimer, holding his hands up in a calming gesture. âIt is a travel machine but not exactly the sort of travel machine you think it is.' He paused and looked at Leonardo, who shrugged.

Wells nodded and Oppenheimer turned back to face Khan. 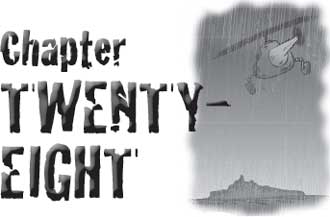 The big helicopter dipped its rotor blades and plunged down through the mist towards Unk Island. As the island emerged for the first time, the pilot turned to the co-pilot and nodded.

The co-pilot gave the thumbs up. âTake us past the cliffs on the west side and come in there. The wind should be easier. We'll put down in the shelter of the east wall.'

The pilot nodded and the helicopter banked around the great black cliffs. 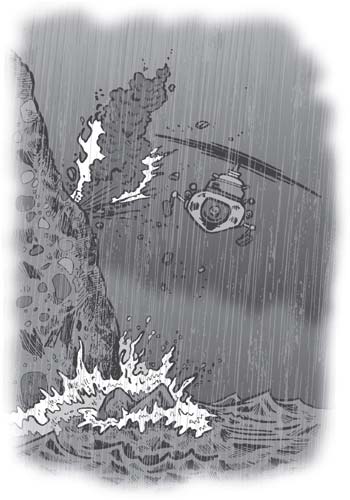 The co-pilot leaned closer to the spray-spattered window of the cockpit. He tapped the pilot on the arm and pointed.

âWhat in blue blazes is that?' he said, directing the pilot's gaze towards a large black slot cut into the cliff face. The pilot slowed and as the helicopter steadied, she took a closer look.

âNo idea,' she said, her voice crackling over the headset. âBut I haven't seen it before.'

âBeen a while, I suppose. Shall we go in?'

âNegative,' replied the pilot. âThe call said there'd been trouble. We'll take a look round before we do anything.' She jerked a gloved thumb towards the foot of the cliffs, where what looked like several rusting aircraft lay smashed on the rocks. âLooks like there's been some bad luck around here. We stick to the flight plan.'

She swung the craft away from the cliff just as a plume of orange flame erupted from the black slot. The shock wave hit the side of
the chopper, sending it plunging and spinning towards the ocean.

âSweet Methuselah!' spat the pilot as she fought for control. Summoning all her strength, she wrenched the lever to one side and gunned the already screaming engine. Just as it seemed that they must surely ditch into the black water, the chopper surged upwards and out, away from the cliff.

âWhat the heck was that?' said the pilot.

Both of them watched a ball of fire drift upwards from the opening in the cliff face and then fade into a great plume of black smoke.

âI have no idea,' said the co-pilot, âbut it looks like we got here just in time.' 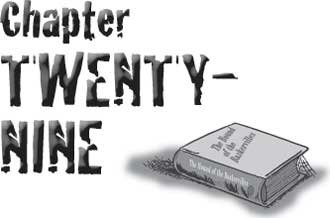 They'd reached the library which, Mort knew, had been built as a fire guard for Festering's priceless collection. Once inside, with the massive doors locked, they'd be safe from Smiler and Khan.

Not that safety was the reason Mort had directed them to the library.

Trish and Nigel slid open the doors. Once open, they shifted Mort inside and quickly bolted the heavy wooden doors behind them. Nigel groped his way towards a leather chair and slumped into it, groaning.

Three overhead lights flickered on, revealing the library to be a vast space lined floor to ceiling with books. About halfway up the walls a mezzanine circled the library to give access to the upper levels.

âBlimey,' said Nigel. He gave a low whistle. âWell, they might not be at school, but these kids have got plenty to read.'

Trish pursed her lips. âThat is quite beside the point, Nigel.'

Nigel shrugged and then sat bolt upright as he caught sight of something. âLook!' he said, pointing at an old-fashioned-looking telephone on a small table in a corner of the room. âDo you think it'll be working?'

âOnly one way to find out,' replied Trish, picking up the receiver. She held it to her ear. âWe have a line,' she said and dialled. âWe need the Unk Emergency helicopter,' she said. âAs fast as you can.'

As Trish began giving precise instructions to the helicopter dispatcher, Mort put his plan into action. He gritted his teeth and, in one quick jerk, dislocated his left shoulder. A lightning bolt of pain shot down his entire body but he didn't make a sound. That was the key; no noise.

Harry Houdini, the great escape artist, had taught him the trick at Madison Square Gardens in 1912 and, once he had mastered his control of the pain, Mort had found it useful on more than one occasion. After a second or two, Mort slipped his arm free of the belt holding him to the temporary stretcher. Once that was done he popped his shoulder back with a second jolt of pain.

Mort glanced over at Trish and Nigel still focused on the phone call.

In less than twenty seconds he had wriggled free of the stretcher and got to his feet.

Mort began moving silently towards the
mystery section of the library.

Mort spun round to see Trish Molyneux looking at him disapprovingly, her hands on her hips. Nigel picked up a wooden chair and held it out in front of him in the manner of a lion tamer.

Trish looked at him. âWhat on earth are you doing, Nigel? He is a child.'

âI'm not taking any chances,' said Nigel. âHe could be dangerous!'

Mort nodded towards Nigel. âHe's right,' he said. âI could be dangerous.'

âNonsense,' said Trish. âWhat you need is someone looking after you properly. You need school. And maybe some more sleep.' 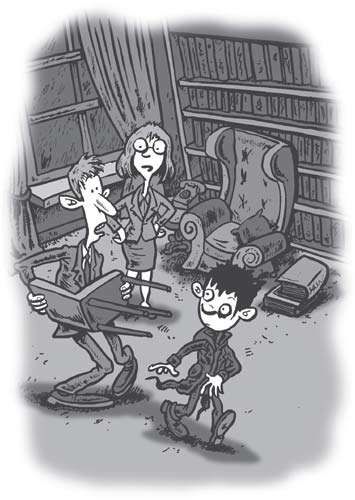 âI'd rather stick with Ms Molyneux. Don't come any closer.'

A faint gleam came into Trish's eyes. She deliberately took a step forward. âAnd what,' she said, sounding out her words very carefully, and looking directly at Mort, âare you going to do if I do come closer?'

âThis,' said Mort and sprinted headlong towards the mystery section.

âStop!' yelled Trish, but Mort carried on running straight at the wall of books. When he was a metre from the wall he flung himself headfirst, his arms outstretched towards the collected works of Sir Arthur Conan Doyle. Watching, Nigel braced himself for the painful impact.

Instead, as Mort's hand connected with the spine of
The Hound of the Baskervilles
, the section of books swung inwards and Mort disappeared from sight. As his heels were lost from view, the books swung back into place with a âclick'.

Nigel put down the chair and tilted his head. âWell, I didn't see that coming,' he said. He turned to Trish, fighting the urge to smile. âWhat now, boss?'

Trish lifted her bag onto her shoulder and pointed at the books. âWe follow him, of course.'

He was too late. Just as Nigel had done, Trish launched herself straight at the books. And just as Mort had done, she too was swallowed up by the darkness.

âWhat about me?' wailed Nigel. He looked around at the gloomy library and, cursing Trish Molyneux, Mortimer DeVere and all of Unk Island, he too sprinted towards the books.