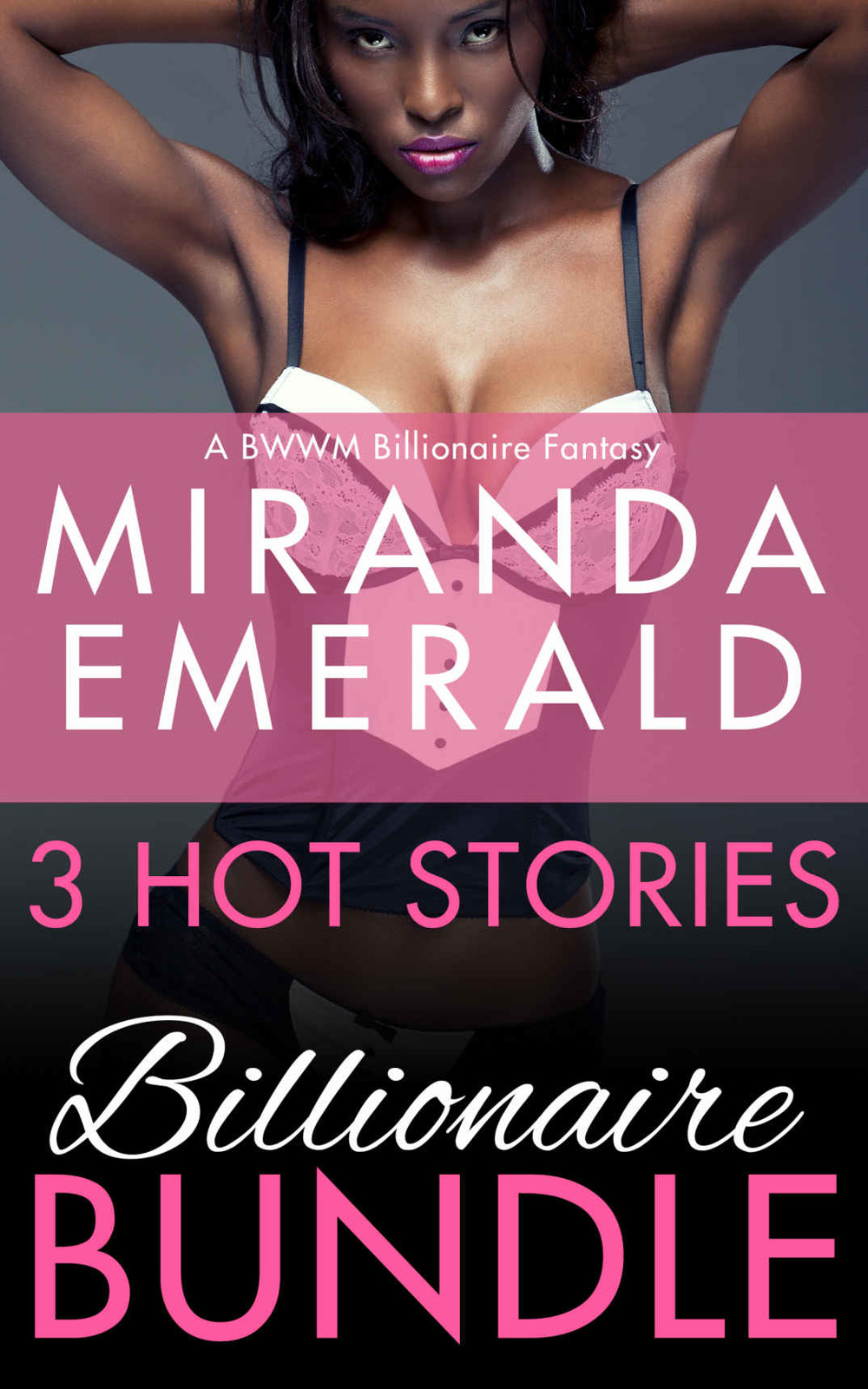 Keisha thought living downtown in the big city would be glamorous – not impossible. She’s just lost her job, her boyfriend’s gone and she’s nearly ready to pack up and move home until she clicks on a mysterious job listing:

“HIRING MODELS FOR CHARITY BENEFIT. ALL TYPES AND SIZES DESIRED.”

1000 dollars for a single nights work: a charity auction for the rich and famous. All she had to do was dress up pretty and stand there. When her auction is won by an anonymous bidder she hardly bats an eye. It was all business, and for a thousand dollars she would eat dinner with anyone – but when the mysterious Tom Belfour shows up at her door everything changes.

The young, handsome white billionaire is not what she would have expected and by the end of the night $1000 and dinner might be the last thing on her mind.

Steamy sex under the stars with the billionaire is just a fantasy, right?

Kiara is a stunning, confident African American woman who thought that being an intern at the biggest financial institution in New York would be all glamour and flash – But after six months toiling away in the mailroom her life has quickly turned from tedious to unbearable.

Office politics, cutthroat competition and steamy sex behind closed doors was the norm at Oakwood and Fremont – but when a chance encounter lands her on the top floor behind the desk of the most powerful man in the city.

The billionaire’s reputation precedes him –She has to put every one of her sexy skills to use if she wants to land a golden position on top. Winning a job is one thing, but could she ever win his heart?

Alisa is on a first class trip to Hawaii to meet with her boss and the mysterious billionaire Mathew Drake. Alisa catches his attention immediately– she’s everything so many of the other girls in finance aren’t: savvy, ambitious, smart – and a black woman with beauty for miles.

Her charm wins him over into signing the big deal, but when he surprises her with an invitation to lunch, things quickly change. Is it a job offer, or a date? She can’t help but hope for the later…

But when she arrives at his villa things are a bit more complicated. After all, it isn’t easy pleasing a billionaire.

Will paradise be too hot to handle?

“Jesus, Dave, I just asked how you were. We haven’t seen each other in a week.”

“I feel like you really don’t want to be here.”

“What does that even mean?”

He shrugged and said nothing for a few moments, then huffed.

I just shouldn’t feel, like, obligated to have to see you. It’s 2015. We don’t have to pick one person and just spend all of our time with them. Like all of it. Forever.” He huffed.

“What are you talking about? I never said-“

“Listen. I just feel like we’re on different pages with this whole thing and it may be better if we just, I don’t know, get some space.”

“Get some space? You’ve got to be fucking kidding me-“

She stared at him.

“This is what happens when you start, like, following societies pressure’s Keisha. We used to just hang out, eat dinner, mess around… Why can’t it just always be like that? Why do we have to be obligated to all these responsibilities?”

“Answering the question “What’s up” shouldn’t feel like a responsibility, Dave!”

Her mind made up she took her head in her hands for a few moments gathering her thoughts, and then stood.

“Get out!” she said a little louder.

“What? Okay! Alright!” he said, taking a few awkward steps towards her “I just feel like you should-“

“Just go.” She said, pointing at the door.

He must have seen the temper in her eyes because he didn’t say anything else. He made a B-line for the door, awkwardly turned to grab his coat giving her one more confused look before disappearing into the night.

The beautiful Keisha Porter stood in her doorway, more exhausted than angry.  She reached up and pulled out a hair tie, letting her black hair fall down in curly waves over her deep brown shoulders.

That moment had been coming for a long time, and now that it was over she was already starting to feel better. Well as good as an unemployed, single stranger to the big city
could
feel.

She woke up the next morning a little later than usual. She rolled around bed for a few minutes checking her phone. There were no new texts and only a few random spam emails. No job offers. She sighed.

Rolling out of bed her feet padded on the cold tile for a few seconds before finding her slippers. She put a cup of tea in the microwave and peeled open a yoghurt at her desk. She flipped through the typical social networking bullshit before practicing the daily ritual of scanning craigslist. The jobs section.

No one was looking for an assistant with 9 months of experience and half a college degree? Surprise, surprise. She made her way over to the classifieds section and just as she was about to close her browser something caught her eye. In big blue letter was the listing:

“HIRING MODELS FOR CHARITY BENEFIT. ALL TYPES AND SIZES DESIRED.”

Her eyebrow shot up and her mouse hovered over the link for a few seconds. A little embarrassed, she clicked it. It had to be a scam. I mean, who hired models on craigslist? Especially models of “all types”.

The page finally loaded and she began to read:

Mandrake Consolidated is enthusiastically seeking interesting models between the ages of 21 and 50 for participation in our Annual Charity Benefit. If accepted you will participate in our Charity Auction where donors will bid on a private dinner with you.

All bids will go to charity.

Compensation for models is 1000.00 USD, which includes your work at the benefit and auction on the 30
th
, as well as a future date to be arranged between you and your donor. While this meeting isn’t obligatory, failure to at least show up for the dinner will result in the forfeiture of half your payment.

If you are interested please respond with a picture and a brief description of yourself.

Thank you for your time

Her eyebrow shot up.
A thousand dollars?
Could they be serious? For one nights work? That would pay rent
and
her outstanding bills. It couldn’t be true. She scanned the ad again, scrutinizing it for bullshit.

Screw it. She shrugged, jotted out a few scratchy lines, attached her facebook profile pic, and clicked send. Her computer chirped and she closed her eyes and took a deep breathe. It’s done. The anxiety faded, and before long the silly ad and her even sillier application were starting to fade out of memory.

What faded back into her memory was her tea. She rushed over to the microwave, but by now it was already cold.

She opened the cupboard over her fridge and pulled down a bottle of wine.  It felt like it was one big joke.
Life
she thought, pouring a glass. A year ago she had honestly believed this was all she needed to start a real
life.

Just move to the city.

“There are jobs there!” her mom had told her “You know I go to town every weekend, out to the restaurants with George, you know? Well I was sitting in one of those trendy places the other night and you know what I realized? There are absolutely no young people here. Everyone in there was 40. At the hottest restaurant downtown. You gotta get to the city where there are people your age, Keisha. People who are smart like you . People with jobs. Get yourself a boyfriend with a nice car and a dog! ”

She took a sip.

Dave was an asshole anyways
she thought.

She flipped through the classifieds again and flirted with the idea of making an online dating profile. Tons of her friends had done it… but they were all practically supermodels compared to Keisha--
with their skinny white legs and their perky tits. Bleach blonde hair and lips that shined too much
she thought, smiling after a moment.

How many guys on OKCupid were looking for a curvy black girl from the country, anyways.
More than you might think
she heard her best friend Nicole saying in the back of her mind.

“I’m sorry for calling so late, but I was hoping to speak regarding an ad you responded to?”

“A what – excuse me, who is this?” she was a little fuzzy from the wine.

“An ad. For a position at our charity event? I could have the wrong number, I’m dreadfully sorry.”

“Oh! Oh wait! Right, I’m sorry” she blurted out “I’m a little slow at this time of night.”

“That’s quite alright. Are you still interested in the position?”

Her stomach started spinning.
The ad!
She had forgotten about the stupid ad. Who was she talking to, exactly? They couldn’t possibly be serious! It had to be a scam, why would they pick
her?

“Excellent. Any questions you have will be answered at the orientation.  I will forward you the address, please arrive at six o’clock. Do you have transportation, or would you like us to send a car?”

“Tomorrow night. Again, I apologize for calling so late, but as you can see it was late notice.”

“The attire is formal.”

The line went dead and suddenly she was alone in her apartment again. The noise in her head stood out against the quiet of the room, and she started to pace excitedly. The wine glass tilted in her hand.

She browsed the google results and her stomach started spinning all over again.
Holy shit.
The company was huge… hell, it looked like they had their own building downtown. She clicked on their page and navigated to the ‘Events’ section. Wouldn’t you believe it?

No matter how many times she flicked through her wardrobe she couldn’t find anything that remotely matched the description of ‘formal’. Maybe it was the wine, but it was only after holding up nearly every dress in front of the mirror that she finally made her decision.

She had a simple white number that could look quite eloquent with the right hair and make-up, not to mention shoes. The next day she started early, showering after a quick lunch and starting her bathroom routine. A friend dropped off a pair of matching white shoes, and they chatted while she re-arranged her hair for the 101
st
time.

“They’re seriously giving you a
thousand dollars? Why didn’t you tell me about this thing, that’s insane!”

“You know you’re going to have to sleep with them for that much.”

Keisha slapped her knee, and turned to face her friend. Her mouth was open and she was blushing.

“Hey, for that much money ‘No’ can mean’s whatever they want it to!”

“Seriously, though. What happens if some crusty old man bids on you?”

“Honestly, it’s just work. I mean, I’ll go to dinner with anyone if I get paid.”

“Just work, huh? And what if Prince Charming ends up buying you? A sparkle in his eye. Have you considered, that?”

Keisha snapped her makeup shut and stood, looking herself over.

She finished getting ready and they stood  in the living room, Keisha nervously jingling her purse.

“You sure you don’t want a ride down there?”

“Alright, come on.” Kate said, ushering her out of the house. “I’m not taking no for an answer!”