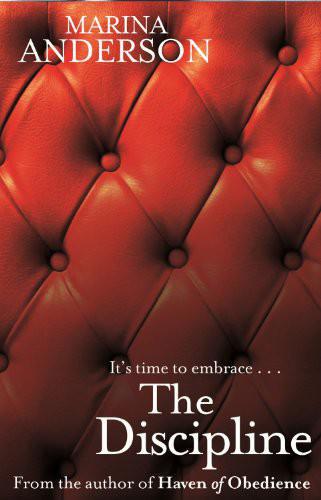 You've devoured The Fifty Shades Trilogy...now it's time to embrace the forbidden pleasures of The Discipline. Young innocent nun Chloe Reynolds is collecting money for Brazilian orphans when she meets sophisticated playboy Carlos. When Carlos opens Chloe's eyes to the corruption behind the charity she is working for, she leaves the Church and heads home to England, thoroughly disillusioned. Even an Ocean can't keep Carlos away from Chloe and she is equally desperate to again be in his dominating presence. Carlos's new mission is to seduce Chloe and to teach her that submitting to his sexual desires will bring her untold pleasures. But is Chloe ready to become a slave to 'the discipline'...?

For Ellenie, with many thanks for all her help!

T
he heavy wooden shutters of the old colonial-style house in the southern part of Rio de Janeiro were closed against the heat of the early-afternoon sun. It looked peaceful, an oasis of calm in the middle of the noisy, bustling, crowded streets.

In the large master bedroom of the house the atmosphere was far from peaceful. As an old-fashioned ceiling fan turned slowly and sluggishly, a tall, bronzed young woman lay spreadeagled in the middle of the vast bed. One of the thin shoulder straps of her red-and-white polka-dot dress had slipped down her arm, the skirt was bunched up round her waist and her right hand was working busily between her slender thighs

A man stood at the foot of the bed; watching and listening intently as she began to approach her climax. As her breathing grew ragged and her fingers moved more quickly he spoke. ‘Slower, it’s too soon. I want to watch you wait a little longer.’

The young woman groaned, moving restlessly against the mound of pillows beneath her head. Her waist-length blond hair was dark with sweat, and her hips twitched with desperate desire.

Although the man’s voice was quiet, she knew him too well to disobey. She could feel the heat spreading upwards through her body, and her belly felt tight with need, but she forced herself to slow her fingers down, and moaned softly as the first deliciously exciting sparks of orgasm faded into the background.

The man nodded approvingly and smiled to himself as his blond mistress tentatively began to caress her breasts and belly in an effort to delay her climax. ‘I didn’t say begin all over again,’ he remarked. ‘Keep your hand between your thighs.’

‘I shall come!’ she protested.

They both knew that he was right, and for another five minutes the beautiful bronzed body heaved and struggled to subdue the pleasure that was threatening to consume it. Finally, when she began to plead for release from her torment, the man moved.

Sitting on the side of the bed, he pulled the girl on to his lap, and she gasped as she felt herself impaled on his long, rigid erection. Realising that her body was finally going to be allowed release from the incredible sexual tension of the past hour, she wrapped her arms around the man’s neck as he started to move her up and down with his hands.

At last the wonderful, scorching heat began to flood through her again, and she cried out with excitement, but then her rhythm was broken as the man stood up. Quickly she wrapped her legs around his waist, pressing herself against him as she tried to find the stimulation that she needed to climax.

The man was breathing rapidly, his excitement growing as he carried her across the room until her back was against the wall. Now he began thrusting in and out of her with
increasing force, and she could see his startlingly blue eyes darken with passion and desire as they both approached their climax.

The blond girl knew the rules, but to her horror she suddenly realised that she wasn’t going to be able to keep to them. He was moving too well, and had kept her on the edge for too long. She was going to come, before he’d been inside her for as long as he liked.

The man also realised it, and all at once the light went out of his eyes. ‘No, Livia,’ he cautioned her, but it was too late. She felt as though an electric current was surging through her body; all her muscles went rigid and then her belly went into violent spasms of almost painful pleasure, and she screamed with a mixture of ecstasy and fear.

As soon as her vagina contracted around him, the man’s pleasure started to swamp him as well. A pulse jumped in the side of his neck as he tried to delay it, but it was no use. With a muffled groan he thrust one final time, grinding his hips against her as hard as he could, extracting every last bit of pleasure from the moment.

For a few seconds they remained locked together, the sweat on their bodies making it difficult for them to part, but then the man withdrew, and with an exclamation of annoyance he let the blonde fall to the ground in a tangled heap of tanned limbs and flowing hair.

She watched him from beneath lowered lids, wondering how he would react to her failure. To her surprise he didn’t speak again, but instead went for a shower, then dressed and started to leave the room.

He turned to look at her, and there was an expression on his face that she’d never seen there before. He looked bored. ‘I’m beginning to think that I’m wasting my time with you,’
he remarked. ‘You don’t seem to understand the meaning of the word discipline.’

‘How can you say that? When did I last fail you?’ she asked.

‘The point is that after all this time, I don’t expect you to fail me at all. How can I rely on you to help me teach someone else discipline if you haven’t mastered it yourself?’

The blonde’s dark brown eyes widened in surprise. ‘What do you mean, someone else?’

‘I need a new hobby, a diversion. I thought that together we might introduce a newcomer to the kind of pleasures we enjoy.’

He shrugged. ‘I have no idea yet. Someone will come along. I trust in fate.’ With that he walked out of the door.

Once she was alone, Livia got up off the floor, padded over to the window, opened the shutters a little and looked at the city spread out below them.

Sometimes she wondered how she’d ever got herself involved with Carlos. She was young, rich and beautiful. Almost every man who saw her desired her, and yet here she was caught in the net of a man who’d taught her more than she’d ever wanted to know about herself. A man whose public persona was so at odds with his darkly perverse private life that no one would believe the truth about him, even if she ever dared to tell it.

The worst of it was that she was enthralled by him. She lived for the forbidden things that they did, the strange world of punishments and rewards that accompanied the sexual discipline which he expected his women to follow. He demanded much of her, but the rewards were great, and just the memory of the way he would sometimes touch her, or bind her, was enough to make her nipples harden with excitement.

Lost in her thoughts, it was several moments before she realised what was happening in the garden beneath the bedroom window. Someone was coming slowly up the long drive. It looked like a woman, but her clothes were strange. Not bright and casual, as most Brazilian women’s clothes were, but dull. The dress looked to have long sleeves.

Opening the shutters wide, Livia leant out to get a better look. As she did so, the figure looked up, and it was then that Livia realised Carlos was being visited by a young nun. Hastily suppressing a giggle, she quickly closed the shutters again, deciding that after she’d showered she’d try and find out exactly what her lover had meant by his last remark.

Livia stepped beneath the powerful spray of water just as Chloe Reynolds, a novice nun in the first year of her novitiate, raised the brass knocker on the front door and banged loudly with it.

When she stepped into the delightfully cool hall, it was probably fortunate that she had no way of knowing that she was also taking her first steps into a very different world from the cloistered safety of the order of St Luke of the Holy Cross.

N
ever in her entire life had Chloe seen a hallway like the one she was standing in now. The intricate marble tiles beneath her feet must have cost a small fortune, she thought to herself, and every exquisite object on the dark mahogany side tables looked like a collector’s dream.

Although she hadn’t wanted to come here, and if Sister Agatha hadn’t had a migraine she certainly wouldn’t have had to come alone, she was glad now that she’d been sent. She’d felt awkward walking through the front garden, listening to the shrieks of the peacocks, but now she was angry. Angry that in a country where there was so much poverty, people’s consciences let them live like this.

Lost in her thoughts, she didn’t hear Carlos Rocca’s footsteps on the stairs. It wasn’t until he gave a slight cough that she lifted her eyes from contemplating the floor tiles. But when she saw him, she found it almost impossible to breathe. It was as though the close, humid air outside had followed her in and was threatening to choke her.