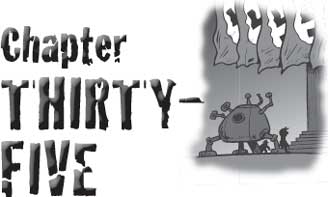 The time machine plunged down the sheer cliff face at approximately fifty-five metres per second towards the jagged rocks below.

On board, Mort, Trish, Nigel and Khan tumbled helplessly like clothes in a washing machine. Mort squeezed his eyes shut and braced for the impact, hoping the end wouldn't hurt too much. 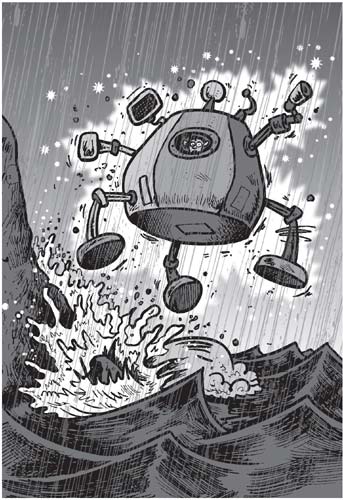 And then â¦ nothing.

Mort opened an eye and swivelled it towards the windscreen.

Two metres below him, illuminated by the light from
Retro
, the waves were pounding the rocks, so close that splashes of salt water were landing on the glass.

Retro
was hovering just above the water.

âI was thinking along the same lines myself, Mr Khan,' said Trish. âIt seems the only possible explanation.' She looked at Mort. âSo, Mortimer, are we dead?'

Mort tried to clear his thoughts as he bobbed weightlessly. Was it really possible they were already dead? That the crash had been so horrible they had blocked it out? And, if they were dead, how long would they be
kept floating? It was quite an uncomfortable sensation.

Everything certainly felt real, the same as when he'd been alive. The controls, Trish's voice, everything.

Suddenly, small coloured flashes and starbursts began popping all around the cockpit,
Retro
began to rotate, and a sudden image of H.G. Wells's hand reaching for the ignition button just as they had slid over the edge popped into Mort's head.

He knew exactly what was happening.

âNo, we're not dead, Ms Molyneux,' said Mort as his time machine began to spin faster and faster and faster still, its movement creating a whirlpool in the waves below them. âJust the opposite in fact.' Mort smiled as the LED display began counting slowly backwards. âWe might be getting younger!'

âVot you say?' said Khan, his skin a nasty shade of green. He had not been in anything more mobile than a golf buggy for hundreds
of years.

âI think what Mort is trying to say,' said Trish, âis â¦' She stopped and looked at Mort. âWhat is it you're trying to say?'

Mort opened his mouth to speak but nothing came out.
Retro
was spinning so fast that the sea and rocks and cliff wall were now a blueâblack blur. The cabin filled with a deep bass hum and a web of electric blue light began to climb up their legs like weeds around a tree stump until all four of them were cloaked in what looked like shining suits of light. On the control panel, the red LED display was displaying changing numbers. 1999. 1998. 1997.

Mort pointed at the display. He forced his words out through clenched teeth, his voice distorted and crackling with electronic static.

Quite suddenly, the electronic light vanished and the noise level inside the craft decreased as if a jet engine was shutting down. Trish found she could speak clearly.

âNonsense,' she said. âIt's not possible!' She looked at the display.

âI'm sure Unk Shire Education Department policy does not allow children to time travel!' Outside the window, ghostly shapes swam into view before fading away. âMr Skelly would have something to say about that kind of carry-on!'

âLet me get this straight,' croaked Nigel. âThis is a time machine?'

Mort nodded and pointed at the LED display which had stopped.

Retro
shuddered to a complete halt. Everyone stopped floating and dropped to the floor. Outside, the windscreen of the cockpit was covered in a thick layer of grey dust.

âI don't believe a word of this nonsense,' said Trish. âTime machine indeed! This is all some sort of complicated trick if you ask me!'

She pressed the hatchway door release button and the gangplank slid smoothly down.

âThere,' said Trish, stepping forward. âI'm sure there'll be a perfectly reasonable explanation for all of this.' She moved down the gangplank. âCome on, Nigel, let's find out who's in charge.'

âIs she?' asked Nigel. âI mean, if we've gone back in time, neither of us is born yet, so technically â¦'

Trish looked back from the foot of the gangplank.

âCome on, Nigel!' she barked.

Hesitantly, Nigel, Mort and Khan followed Trish down the gangplank.

Trish stepped out into the darkness and tapped her foot on the solid floor.

Mort produced a torch from an inside pocket and pressed the switch.

They appeared to be inside a very grand room. Mort swept his torch up a row of huge white stone columns rising from a set of stone steps. As the light travelled higher the beam came to rest on a red banner with a white circle containing a weird black cross in the middle.

Trish, following his gaze, put her hand to her mouth.

Suddenly, from somewhere to the left of the columns, a door crashed open and a group
of soldiers wearing grey uniforms clattered in, some with torches, and all carrying sub-machine guns that they pointed at the time-travellers.

âI've been kidnapped!' Nigel squealed, holding his hands out towards the soldiers. âThank God you've arrived!'

âI'd do as the nice German soldier says, Nigel,' said Trish, âhowever rude he may be.' She raised her hands in the air.

Mort and the others did the same.

âVere are we?' Khan hissed.

âYou really want to know?' said Mort out of the side of his mouth. One of the soldiers stepped forward and screamed at Mort.

â
RUHE
!' yelled the soldier. â
RUHE
,
SCHWEIN
!' He glared at Mort and stepped back into line.

âFrom the look of things,' whispered Mort, wiping the spittle from his face, âI'd say we've landed slap-bang in the middle of World War Two.'

Enid Blyton
(1897â1968) was a prolific English children's book writer who wrote the Famous
Five and Secret Seven
series as well as Noddy.

Napoleon Bonaparte
(1769â1821) was a smallish French military leader and emperor who conquered much of Europe in the early 19th century. He was very good at fighting wars and wearing funny hats.

Boudicea
(around about AD 20âAD 61) was a tough British queen who led a revolution against the Romans almost 2000 years ago.

Lewis Carroll
(1832â1898). Lewis Carroll's real name was Charles Lutwidge Dodgson. His most famous book is
Alice's Adventures in Wonderland
. He had a very strange haircut.

Geoffrey Chaucer
(c. 1343â1400) was the first famous English writer. His book
The Canterbury Tales
is still a bestseller.

Agatha Christie
(1890â1976) was a British crime writer who invented the detectives Hercule Poirot and Miss Marple. She is the bestselling writer of all time with sales of around four BILLION books.

Leonardo da Vinci
(1452â1519) was an Italian artist, painter, inventor, sculptor, engineer and all round genius who was born in Vinci, Italy. Apart from painting the world's best known painting, the Mona Lisa, da Vinci also took time out to sketch ideas for helicopters, tanks, and many other inventions.

Roald Dahl
(1916â1990) was a writer, fighter pilot and spy. He was very tall and wrote such classics as
Charlie and the Chocolate Factory
and
Matilda
.

Charles Dickens
(1812â1870) was an English writer most famous for writing
The Adventures of Oliver Twist, A Christmas Carol and Great Expectations
among many others.

Vlad the Impaler
(1431â1476), Prince of Wallachia, was better known as Dracula (his family name was âDrakulya') and was the inspiration for Bram Stoker's 1897 book of the same name.

Genghis Khan
(about 1162â1227) was a blood thirsty warlord/warrior Emperor of the Mongol Empire. He ruled for twenty-one years between 1206 and 1227.

Nero
(AD 37âAD 68) was a bonkers Roman Emperor famous for playing his fiddle while Rome almost burnt down around him. He ordered the execution of his mother and probably poisoned his stepbrother.

J. Robert Oppenheimer
(1904â1967) was an American scientist who helped develop the atomic bomb, the first of which was tested in New Mexico, USA in 1945.

Beatrix Potter
(1866â1943) was an English writer best known for
The Tales of Peter Rabbit
.

Elvis Presley
(1935â1977) was the King of Rock and Roll. His most famous songs include âHound Dog', âHeartbreak Hotel' and âJailhouse Rock'.

Dr Seuss
(1904â1991). Despite the name, the American writer Dr Seuss wasn't a doctor. Theodor Seuss Geisel was, however, a fantastic writer and illustrator who wrote Martin Chatterton's favourite book,
Horton Hears a Who
, as well as
The Cat in the Hat
and lots more.

William Shakespeare
(1564â1616) was almost certainly the best ever writer in the English language. He was also an actor and owner of a theatrical company. If you look closely at the most famous drawing of him you will see a small Z-shaped scar on his forehead.

Herbert George Wells
(1866â1946), better known as H.G.Wells, was an English writer who wrote
The Time Machine
(about a time machine) and
The War of the Worlds
(about an invasion from Mars). He's considered one of the first science fiction writers and he had a big moustache.

Martin Chatterton was born in Liverpool, England and has been successfully writing and illustrating books for almost thirty years. He has written dozens of children's books and illustrated many more for other writers, including several British Children's Laureates. His work has been published into fourteen languages and has won and been shortlisted in numerous awards in the UK, US and Australia. Alongside writing for children, Martin writes crime fiction (as Ed Chatterton), continues to work as a graphic designer and is currently working on his PhD. After time spent in the US, Martin now divides his time between Australia and the UK.

Thorn in My Side by Karin Slaughter
HartsLove by K.M. Grant
One From The Heart by Richards, Cinda, Reavis, Cheryl
Bomb (9780547537641) by Taylor, Theodore
By Reason of Insanity by Randy Singer
A Valentine Surprise by Page, Lisa
Seleste deLaney - [Badlands 02] by Clockwork Mafia
Fire In The Blood (Shards Of A Broken Sword Book 2) by Gingell, W.R.
Immortal by Pati Nagle
Brothers In Arms (Matt Drake 5) by Leadbeater, David