The Chopper Suit popped right off his body and landed in a heap on the floor.

Zac looked around him. He was in a big round room filled with jet-packs, parachutes, and other kinds of personal flying machines.

There was a ladder leading up out of the room. Zac climbed up and found himself inside a narrow hallway.

Zac walked down and opened the door at the end. He stepped into an enormous lounge room. It was filled with beautiful antique furniture and decorated with priceless paintings and statues. All around the walls were shelves stuffed with hundreds of stolen artefacts and gadgets.

Zac turned and saw Professor Voler sitting at his ornate wooden tea table, dressed in his usual suit and tie. He was buttering some toast and smiling warmly at Zac.

Then Zac saw something that made his stomach turn. Voler wasn’t alone.

Sitting in a chair opposite the professor was BIG agent Caz Rewop. 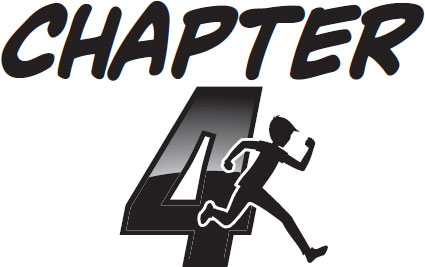 12-year-old Caz Rewop was one of BIG’s most dangerous spies. Zac had met her several times before. He knew she was nothing but trouble.

Caz didn’t look too happy to see Zac either. ‘Agent Rock Star,’ she growled, leaping to her feet.

She was carrying a big stick with a BIG logo stamped onto the handle. Caz gave it a flick, and a bright red cord of electricity shot out the end. She held the gadget like a whip towards Zac, ready to strike.

Zac looked from Caz to Voler and back again.
WHAT is going on?

‘Everyone, please, settle down,’ said Voler, standing up calmly. ‘If you’ll kindly take your seats, I will explain everything.’

Zac and Caz didn’t move. They just stood there, frozen on the spot, glaring at each other. 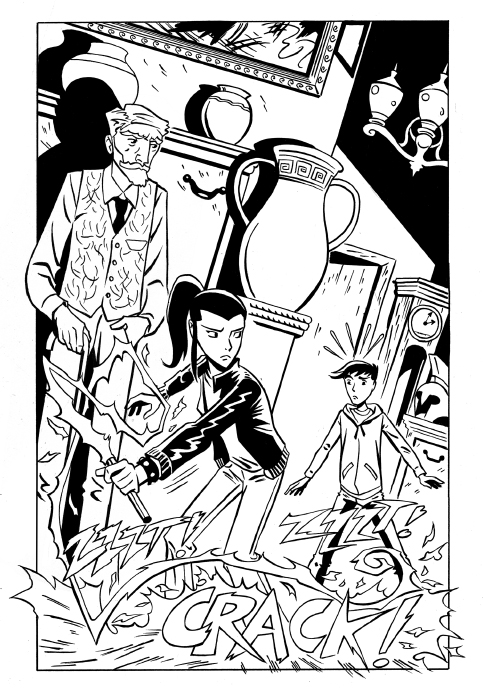 ‘Come now,’ smiled Voler. ‘Your breakfast is getting cold.’

He pulled the cover off a tray piled high with bacon, eggs, sausages and hash browns.

Zac sat down at the table, shaking his head.

He knew Voler was nothing but a thief and a liar, and he didn’t trust the old man’s kindness for a second. But co-operating with Voler seemed like his best chance of getting the X-Beam blueprints.

Caz seemed to agree. She gave Zac one last glare, then switched off her Electromagnetic Whip and took her seat again.

‘There we are,’ said Voler cheerfully, beginning to serve out the breakfast. ‘Now, I suppose you’re both wondering about those X-Beam blueprints.’

‘What do the blueprints have to do with
him?
’ said Caz angrily, stabbing a finger in Zac’s direction. ‘You said you were going to give them to BIG!’

‘What?’ said Zac, his eyes darting over to Professor Voler. ‘You said you were giving them to GIB!’

‘Actually,’ Voler corrected, ‘what I
said
was that I am willing to give the blueprints away. I never said to
whom
.’

Voler put a plate of food down in front of each of them. Then he reached into his pocket and pulled out a small plastic toad.

‘Inside this plastic toad is a Data Storage Device, or a DSD, which contains everything you need to build a working X-Beam,’ Voler explained.

‘I propose a competition,’ said Voler, picking up a silver knife and fork. ‘In a few hours, the two of you will be dropped off in the Murky Swamp. This DSD will be hiding somewhere down there. Whoever finds it first may keep it.’

‘But why?’ asked Zac. ‘Why are you doing this? You’ve spent your whole life stealing things from other people! Why are you suddenly giving stuff away?’

‘Those blueprints mean nothing to me,’ said Voler with a wave of his hand. ‘Look around you. I have all the riches I need. What I want now is to be
entertained.’

‘Entertained?’ said Zac. ‘You mean this whole thing is just some twisted game for your amusement?’

‘Yes and no,’ said Voler. ‘I shall certainly enjoy watching you compete. But I assure you this is far more than just a game.’

He took a sip from his tea cup and then continued.

‘There are dangerous things in that swamp, Zachary. Toxic waters. Creatures that are big enough to swallow you whole. Not to mention a few of my own little surprises.’

‘And what if I refuse?’ demanded Caz. ‘What if I don’t want to play your game?’

‘Then Zachary gets the DSD all to himself,’ said Voler. ‘Of course, if it is Zachary who refuses, the DSD is yours.’

Zac stared at Voler. There was no way he was letting Caz get her hands on those blueprints. And from the look in her eyes, Caz was thinking the same thing.

‘Excellent,’ said Voler, clasping his hands together. ‘We begin in three hours.’

Zac glanced at his watch.

Voler smiled again and picked up his knife and fork.

‘Now then,’ he said brightly, ‘time to eat this breakfast! You’ve got a big day ahead of you and you’re going to need all the energy you can get.’ 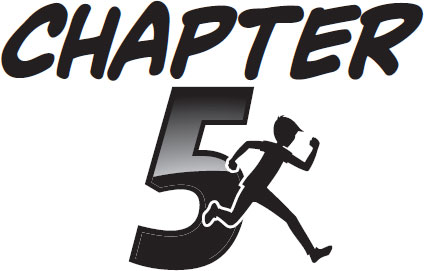 ‘Here are the rules,’ said Voler, pacing up and down in front of Zac and Caz.

They had finished breakfast, and now Voler’s jet was hovering just above the Murky Swamp. Zac, Caz and Voler were down in the room full of flying machines, where Zac had first arrived.

‘Rule number one,’ said Voler. ‘You may go anywhere in the swamp and the forest.’

‘Rule number two,’ Voler continued. ‘You are only allowed to take the equipment you were carrying when you arrived.’

Caz held up her Electromagnetic Whip and grinned nastily at Zac.

Zac felt around in his pocket for the SpyPad.
Lucky for me this thing is about a hundred gadgets in one,
he thought.

‘Rule number three,’ said Voler. ‘You have until 6 p.m. to find the blueprints.’

Zac looked at the time.

‘What happens if neither of us has found the blueprints by then?’ Zac asked.

‘Then I will leave the pair of you behind and be on my way,’ said Voler. ‘And believe me when I say that you do
not
want to be stranded in the Murky Swamp after dark.’

Voler reached into his suit pocket. He pulled out two yellow envelopes and handed one each to Zac and Caz.

‘Open these when you get down to the swamp,’ Voler instructed. ‘The clues inside will help you find the blueprints. I have also scattered a few other vehicles and so on around the swamp for you to uncover. You are allowed to use whatever you find.’

Voler pulled two green parachutes – or things that looked like parachutes – down from hooks on the wall. Each one was made from a big sheet of flexible plastic, stretched over a metal frame. The frames arched up in the middle, pulling the plastic into a dome shape.

Zac took his parachute and strapped himself into the harness. Caz did the same.

‘Excellent,’ said Voler. ‘Well, good luck!’ He reached over and pulled a lever on the wall.

But then the metal trapdoor clanked open under Zac’s feet and he was falling through the air. He reached up and firmly gripped the parachute cables.

The parachute filled up with air, slowing his fall.

Twisting his body left and right, Zac found that he could steer the parachute in any direction. He began gliding down towards the swamp in wide, lazy circles.

The flexible metal harness responded to his tiniest movements. It was almost like the parachute was part of his body.

This is incredible!
thought Zac.
Why hasn’t Leon come up with a design like this?

There was a sudden flash of movement in front of Zac. Caz was speeding towards him on a collision course. She was trying to knock him out of the sky!

At the last second, Zac swooped clear of Caz’s path. Caz went spinning through the air, only just managing to keep control of her parachute.

Trust Caz to play dirty,
Zac thought to himself. He tilted his body forward, increasing his speed. He dived down towards the swamp, then pulled up at the last second and…

He hit the muddy water feet-first and quickly began pulling off his parachute harness. 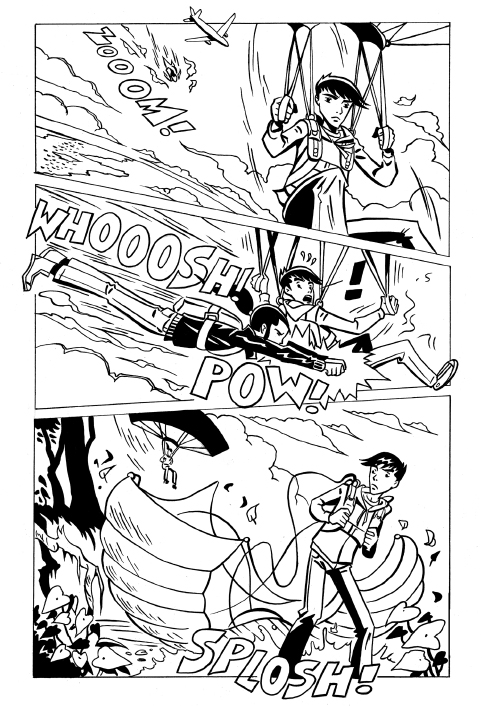 Standing waist-deep in the water, Zac took Voler’s envelope out of his pocket. He tore it open and pulled out three soggy cards with shapes printed on them. 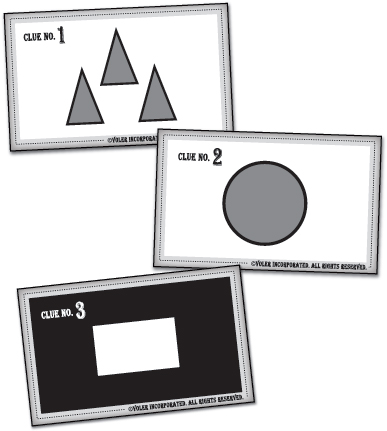 Great,
thought Zac.
What on earth are these?

He looked around at the swamp he had landed in. Dirty brown water stretched out in all directions. Here and there, little islands of mud rose up from the water.

Up ahead, way off in the distance, Zac could see a forest. And to his left, two enormous mountains stretched towards the sky.

Mountains!
thought Zac, staring down at the first card.
Is that what these triangles are supposed to be?

Caz seemed to think so. Looking around, Zac saw her splashing through the water in the direction of the mountains.

‘I’ll wait for you at the finish line, Agent Rock Star!’ she called over her shoulder.

Zac was about to follow her when he noticed something.
Hold on
, he thought
. Why are there three triangles on the card and only TWO mountains?

He peered around the swamp again. Maybe that wasn’t the answer after all.

Then the forest in the distance caught Zac’s eye again. What if those triangles on the card were meant to be trees?

He turned away from Caz and sprinted off in the direction of the forest.