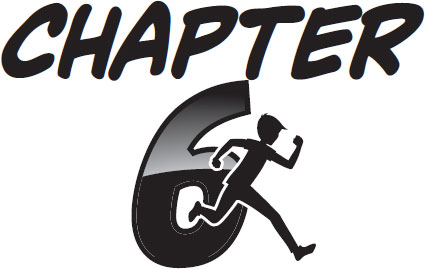 Hours later, Zac was still wading through the swamp in the direction of the trees.

He was almost there, but it was hard going. The hot sun beat down on him. There were spiky reeds growing everywhere. The mud at the bottom of the swamp grabbed at his feet with every step.

Zac was starting to wonder whether he’d made the right choice after all.

Zac whirled around, but there was nothing there. Just ripples on the water.

He was sure he’d heard something moving behind him.
Probably just a tree branch falling into the swamp,
he told himself.
Just concentrate on finding the blueprints.

But then Zac felt something slither past his leg. Something big.

OK,
he thought,
I definitely didn’t imagine that.

Zac started moving more quickly through the water, trying to get away from whatever was swimming around down there.

Something long and grey leapt up into the air in front of Zac, then splashed back down into the water.

An eel!
Zac realised with a shudder.

But this was no ordinary eel. It was as thick as a tree trunk, with big pointed teeth. How was that even possible?

There must be something in the water,
Zac thought.
Something toxic that makes the animals get like that.

But he decided to leave the scientific explanations to Leon and concentrate on not getting eaten.

Up ahead, there was a huge fallen tree poking out of the water. Zac waded over and pulled himself up on top of it.

Looking down, he saw the eel circling the tree, getting ready to leap up and attack again.
Eels are so gross,
he thought to himself, getting out his SpyPad.

He set it to Laser and pointed the SpyPad down at the water. Then he adjusted the beam setting to Maximum Power.

At first, the eel didn’t seem to react. It just kept on swimming in circles around Zac. But then the water started to steam and bubble, boiling in the heat of the laser.

The eel leapt out of the water again. It let out an ear-splitting screech and snapped its jaws at Zac.

Zac ducked out of the way just in time, grabbing hold of a branch to steady himself.

The horrible creature crashed down into the swamp and slithered away.

Zac let out a long sigh and waited for the water around him to cool down again. He scanned the area with his SpyPad.

Then Zac noticed something that made his eyes light up. It was one of the little mud islands that dotted the swamp. Most of these islands had only a few little bushes or weeds growing on them.

But this one was different. There were three trees sitting on top of it.

Zac pulled Voler’s cards out of his pocket and glanced at the picture of the three triangles.

This must be it!

Zac dived down into the water and hurried across to the mud island. He climbed up between the trees and looked around for some clue about what to do next.

‘If these trees are the triangles,’ Zac said, thinking out loud, ‘then the next thing I need to find is something round.’

His eyes flashed to the sky. Hovering through the air towards him was what looked like a black metal soccer ball.

Well, I guess that would be the round thing I’m supposed to be looking for.

Unfortunately, this particular round thing also happened to be firing lasers straight at him.

Zac crouched down behind one of the trees.

Zac had seen Voler use a weapon a bit like this before, the first time they had met. He knew that it had motion sensors which triggered the laser blasts. It was called a Laser Orb.

Another blast from the Laser Orb shattered the tree into splinters.

Don’t move,
Zac reminded himself.
If I don’t move, it can’t see me.

Zac froze on the spot, his fingers digging into a pile of sticky mud on the ground. The Laser Orb hovered closer to him.

It spun around slowly, looking for any sign of movement.

Suddenly, Zac leapt up into the air and threw a massive glob of mud at the Orb’s motion sensors.

The Orb shuddered in mid-air, then hovered quietly on the spot.

Zac stood up slowly, making sure the motion sensors really were disabled. But the mud had stuck and was now drying over the Orb. 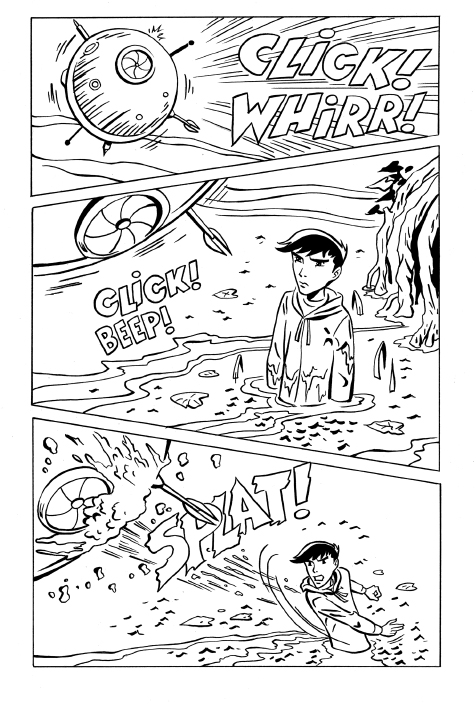 ‘Congratulations, Zachary,’ said a familiar voice. It was Voler. His voice was coming from a speaker inside the Orb.

Two small handles had suddenly appeared from underneath the Orb.

‘Well?’ said Voler’s voice. ‘What are you waiting for?’

Zac stared at the Orb floating above his head. Then he leapt into the air, grabbing hold of the handles.

Shuddering slightly under Zac’s weight, the Orb lifted him into the air and zoomed away across the swamp.