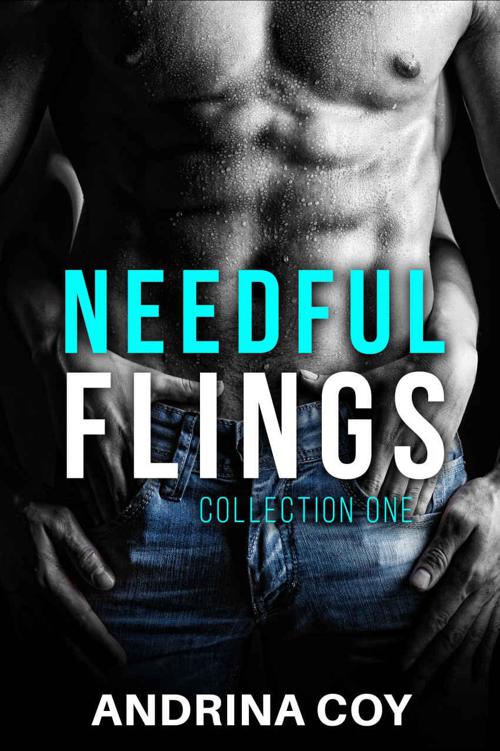 A greeting from the author of the
Needful Flings
series, Andrina Coy:

Hello, reader and thank you so much for stopping by.

Your coming here is very much appreciated. If you are new to the ongoing tale of Mattie and Porter, I say, welcome! If you perhaps read the first volume, and are now hoping to have all three stories at a reduced price by purchasing Collection One, I say welcome back!

As a writer of romantic erotica, it is not my intent to shock, but rather to intrigue. We are all sexual creatures seeking fulfillment in some form or other. Both Mattie and Porter represent that search for themselves and for one another, and I hope I manage to do them justice by delivering the story in a way that entertains and yes, perhaps warms the reader to the imaginings of what is going on throughout these electronic pages.

There is nothing wrong with a bit of naughty to break up the hum-drum of life now and again, right?

So sit back, or if you prefer,
lay back
,
and enjoy the ride…

Mattie enjoyed her first orgasm of the workday seated at her desk inside her cubicle at 1:22 in the afternoon.

It was a Wednesday, the fluttering contractions beginning less than a half hour after returning from lunch with a few of her coworkers. They had all ordered Thai from the small eatery directly across from their building as they most often did on Wednesdays. Mattie had a small helping of curry rice and a glass of ice water. It was the same thing she always had when eating there. She hated that about herself, hated the routine of her work and the all too familiar and perpetually phony smiling faces of her co-workers. Her heart informed her life wasn’t meant to be lost a day at a time, but rather appreciated for each possible moment.

Within a minute of touching herself, those flutters quickly developed into the deliciously familiar, almost painful need for ultimate release. The pad of Mattie’s middle finger urgently rubbed the top of her engorged clit in an increasingly frantic motion while she fought to keep those movements hidden from the many cubicled co-workers who surrounded her on the ninth floor Capitol Hill Seattle office building that overlooked the Space Needle to the west. The sounds of other fingers stroking keyboards was more than enough to conceal what little sound was made by Mattie stroking herself.

The tone of Mattie’s breathing deepened as a light layer of sweat developed above her meticulously groomed brow while her right hand remained hidden inside of her dark blue business skirt and just underneath the simple white panties that were quickly moistened by her pussy’s increasingly humid interior.

Her mouth opened halfway without sound as another wave of pleasure crashed over her, causing a tremor to move up and down her seated body.  Mattie’s eyes closed momentarily as she considered stopping after that second orgasm but the never quite fully satiated monster in her demanded yet more attention. Her clit ached to be touched again, and whatever momentary resolve to stop broke apart as her finger began moving in those tight circular motions that promised to culminate in yet another orgasm.

She rarely stopped before having three, and often enjoyed many more if conditions and courage allowed.

“Hey, Mattie, you finish up with the review of the Tycor proposal yet? I promised Bill he’d have it by the end of the week. He’s meeting with the investors soon and wants to make sure everything’s tight.”

“I should have my review done by the end of the day, Mr. Beadle. In fact, it should be done within the hour. Just need to give it a quick second look.”

Mathew smiled as he placed his right hand on Mattie’s left shoulder and gave it a gentle squeeze.

Seconds after Mathew turned and began making his way back to his office the first two fingers of Mattie’s right hand plunged knuckle deep into the silken hot-wet walls of her womanhood as her thumb pressed down furiously over her impossibly hard clit. Her body rocked forward as she let out a soft clearing of her throat that was actually an attempt to prevent herself from crying out in pleasure. Mattie had to clear her throat again, loudly, and then bite down on her lower lip as the most deeply intense orgasm of the day grabbed hold of her. Her eyes shut tightly as she coughed and then allowed her breath to escape between tightly pursed lips.

Mattie smiled to herself as she felt a trickled of moisture escape the confines of her underwear and make its way down her toned inner thigh.  She rose from her desk and made her way toward the hallway, smiling at two of her female coworkers as she passed by their own cubicles. The first was Melanie, a recently divorced forty five year old mother of three whose husband left her for a woman half his age. Melanie always had her thick blonde hair pulled back in a pony-tail and wore either a pair of faded jeans and oversized sweatshirt, or a pair of a size too small black slacks and black wool sweater. She rarely used any make-up even though her skin was often marred by blemishes. Mattie considered Melanie already well on her way to disappearing altogether from the world.

The second coworker she passed was Linda Brooks. Linda had been hired just five months ago after graduating from a nearby community college with an Associate Degree in business administration.  She had recently turned twenty-three, an age when her generous tits remained nearly as perky as her disposition. Mattie found Linda’s cheerful and youthful personality something of a conflict, thinking Linda to be a name better suited to an older, bitter someone.

Linda was well dressed in the fashion of the moment, a pair of mid heel black pumps, a form fitting tight black skirt, and a beautifully designed white blouse that plunged several inches in the front to provide an ample view of the breasts she was so clearly proud of.

She does have great tits.

Mattie, like most women, even those who would never admit it, was an enthusiastic breast aficionado. She enjoyed a fascination for them that rivaled her interest in cocks of all shapes, colors, textures, and sizes.

Linda smiled up at her and then resumed working at her keyboard, her mouth falling into a slight frown as she concentrated on the soul-killing tedium of data entry. It was the kind of work that made a woman like Mattie find dangerous and delightful distraction whenever possible, especially the kind that left her pussy throbbing with fatigued contentment.

Mattie paused, not yet sure she wanted to commit to Tully’s. The Irish pub atmosphere was likeable enough, but the clientele tended to be overly anxious men and women with too much desperation and far too little self confidence.  The place often left her depressed within minutes of her arrival. That said, the text was from Kelly Tomlin, a twenty-seven year old teller who worked in the bank on the building’s first floor. Kelly knew how to have a good time, and seemed quite determined to do so at every opportunity. A former college cheerleader, she was tall, blonde, and quite attractive and was a nice counterbalance to Mattie’s own dark-haired features.

By six o’clock each weekday, Tully’s was filled to near capacity as hundreds of nearby white collar workers drifted in for their ritualistic wind down period. Mattie scanned the bar’s dim interior until she located Kelly’s fresh and smiling face as Kelly waived her over to the small table she had in the far right corner of the crowded space.

Sizzling Nights with Dr. Off-Limits by Janice Lynn
The Firefighter and the Virgin Princess by Jemma Harte
Charmed: Destiny Romance by Dark, Emmie
Burma Redux: Global Justice and the Quest for Political Reform in Myanmar by Ian Holliday
The Sealed Letter by Emma Donoghue
Nothing gold can stay by Dana Stabenow
The Four Kings by Scott Spotson
Blind (Senses Series Book 1) by Xavier Neal
The Earl's Secret by Kathryn Jensen
A Masterly Murder by Susanna Gregory